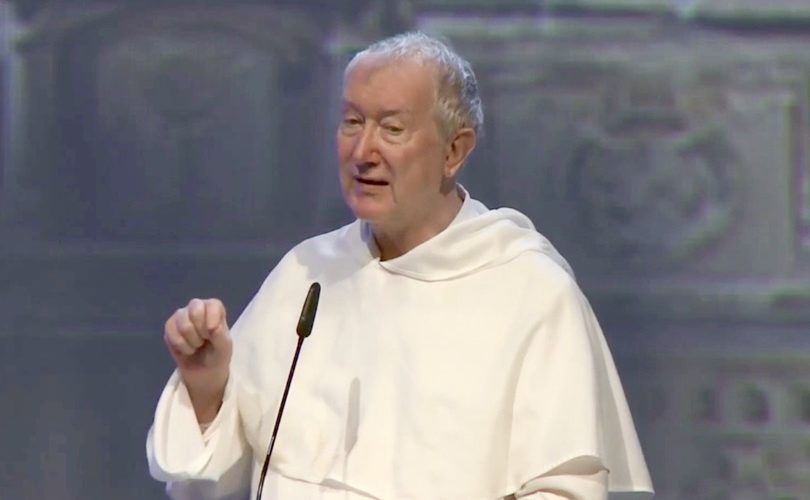 PHILIPPINES, January 28, 2016 (LifeSiteNews) — A Dominican priest and recent Vatican appointee who believes homosexual activity can “be expressive of Christ’s self gift” has criticized Catholics who, he says, spend too much time focusing on what homosexuals are “doing in bed.”

“I think people always want to know what they’re doing in bed. What’s in it for me to go around asking everybody what they’re doing in bed? I don’t do that,” said Dominican Father Timothy Radcliffe in an interview yesterday with Philippines social news network Rappler. Fr. Radcliffe, who was in the Philippines as a guest speaker at the 51st International Eucharistic Congress, was responding to an interview question about what he finds most disappointing in the way Catholics treat homosexuals.

The British author, speaker, and former Master of the Dominican order from 1992 to 2001 was appointed last year by Pope Francis as a consultor for the Pontifical Council for Justice and Peace. The decision came despite Fr. Radcliffe's longstanding opposition to the Church's view of sexuality.

In 2005, as the Vatican deliberated the admission of men with homosexual tendencies to study for the priesthood in the wake of the Church sex abuse scandal, Fr. Radcliffe said that homosexuality should not bar men from the priesthood, but rather, those who oppose it should be banned.

In a 2006 religious education lecture in Los Angeles he said that Christians must “accompany [gay people]…letting our images be stretched open,” adding that this means “watching 'Brokeback Mountain,' reading gay novels, living with our gay friends and listening with them as they listen to the Lord.”

In 2013 as a contributor to the Anglican Pilling Report on human sexual ethics, Fr. Radcliffe said homosexual acts can be understood in terms of an “Eucharistic sexual ethic that started with Jesus’s gift of his body at the Last Supper.”

“We cannot begin with the question of whether [homosexual behavior] is permitted or forbidden! We must ask what it means, and how far it is Eucharistic. Certainly it can be generous, vulnerable, tender, mutual and non-violent. So in many ways, I would think that it can be expressive of Christ’s self-gift,” he said.

Fr. Radcliffe also argued in the same report that rules of “sexual conduct” are absent in most of Church history and that the Church’s present day “obsession with sex and a stress on rules (are) both relatively late and alien to traditional Christianity.”

In his interview with Rappler, Fr. Radcliffe said that his “position on gay marriage is the Church’s,” but stressed that Catholics “must be open to gay people.”

“I must be a help. I must not be a hindrance. Everybody’s on their journey, and Pope Francis said, ‘Who am I to judge,’” he said.

He also told Rappler that Catholics have, in the past, misinterpreted his comment that homosexual activity can “be expressive of Christ’s self gift.” “Some people like to sniff out heresy. Usually it’s their own invention,” he said.

The Catholic Church teaches that homosexual acts are always wrong because they are “contrary to the natural law” and therefore “intrinsically disordered.”

“They close the sexual act to the gift of life” and they “do not proceed from a genuine affective and sexual complementarity,” the Catechism of the Catholic Church states.

The Church recognizes that the homosexual inclination itself is “objectively disordered” because God created sexuality to be ordered toward the spousal love of a man and woman whose one-flesh union leads to the creation of new life, something that is impossible between two men or two women. The Church teaches that persons attracted to the same sex are undergoing a time of “trial” and, like all Christians, are called to “chastity.”

Numerous Christians hold that they are loving homosexuals when they warn them about the deadly dangers to both spirit and body when one engages in homosexual behavior. They hold that condoning homosexual activity would not be the loving thing to do, but precisely the opposite.

Fr. Radcliffe spoke at the Eucharistic Congress on the virtue of hope. During his speech he praised large families for offering hope to the world by having many children. He decried declining birthrates as a sign of despair for the future. But at no point did he speak about hope as a theological virtue that, as the Catechism teaches, gives the follower of Christ a divinely infused “confident expectation” for heaven, as well as a filial “fear of offending God’s love.”