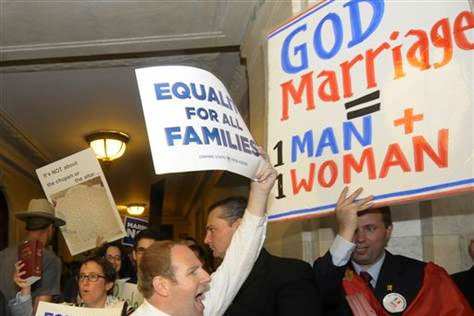 INDIANAPOLIS, October 29, 2019 (LifeSiteNews) — A former social worker in Indiana has filed a discrimination complaint against Roncalli High School and the Archdiocese of Indianapolis, claiming that the religious school had no right to discharge her for publicly advocating that the Catholic school accept employees who violate Church teachings on same-sex “marriage.”

Over the past two years, Roncalli fired former counselors Shelly Fitzgerald and Lynn Starkey for claiming to be “married” to other women despite Catholic teachings on marriage and homosexuality, the Indianapolis Star reports. Kelley Fisher, a self-proclaimed “voice for social justice” and Catholic Charities employee assigned to Roncalli, wrote a pair of public Facebook posts critical of their ouster.

One of the posts contained a copy of a letter Fisher had written to the archdiocese calling on it to change its contract language barring employees from violations of Church teachings such as same-sex “marriages.”

In response, she says, she was called into a meeting with Catholic Charities and Roncalli principal Chuck Weisenbach, in which she was questioned as to whether she could be trusted to follow Catholic teachings while performing her duties as a social worker counseling LGBT students. “Our job is, as a counselor or social worker, that we don’t bring our values or judgment into a session,” Fisher claims.

She says that four months later, she was placed on a “performance improvement plan” for having “engaged in conduct that is adversarial to the school” and was told that “returning to Roncalli next year is not going to be an option.” Catholic Charities ultimately fired her in May.

In response, Fisher has filed a discrimination complaint with the federal Equal Employment Opportunity Commission (EEOC), which could clear the way for her suing the archdiocese. “If you publicly support, you know, (being) against discrimination … you too, can be a victim of losing your job,” she claimed.

In response to questions from IndyStar about Fisher’s dismissal, the archdiocese said it has a constitutional right to “hire leaders who support the schools’ religious mission.”

The Catechism of the Catholic Church holds that homosexual relations are “intrinsically disordered” and “contrary to the natural law” and cannot be approved under any circumstances.” Individuals afflicted with same-sex attraction must be “accepted with respect, compassion, and sensitivity,” while at the same time, they are “called to chastity,” like all other Catholics.

Other Roncalli employees told the Indy Star the case left them fearful of attending outside events on their own time that might be perceived as conflicting with the archdiocese’s values, a fear the archdiocese says is unfounded.

“No teachers or counselors were told they need permission to attend outside events or civil weddings of any kind,” it said. “The expectations for all teachers and counselors at Roncalli are clearly laid out in the school handbook, and the superintendent of Catholic schools meets with any employees who have questions.”

The Archdiocese of Indianapolis is also currently locked in another legal battle over its right to insist that its employees uphold its faith — this one against a male teacher at Cathedral High School suing because he was fired for “marrying” another man.