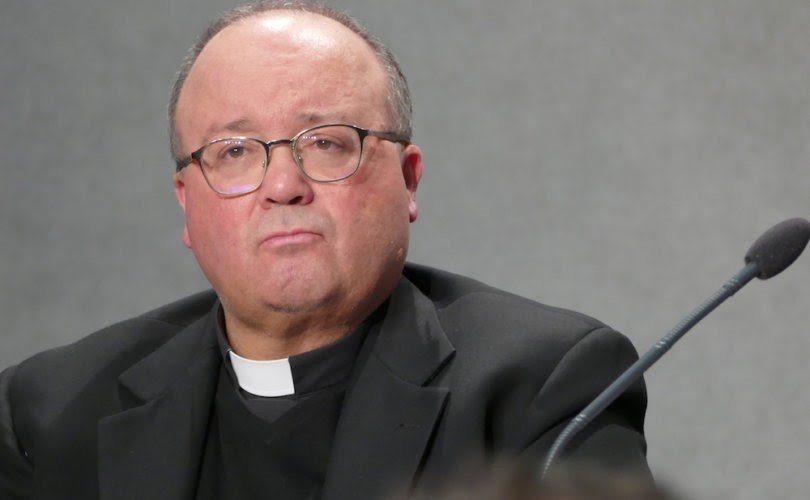 (LifeSiteNews) — The Archbishop of Malta publicly criticized one of his priests, instructing him to cease “inflammatory and hurtful comments” against homosexuals and warning him that he could be prohibited from public ministry.

Archbishop Charles Scicluna also issued an apology to Maltese homosexuals and their families:  “I want to apologise on behalf of the Church to all those who were hurt by these harsh words, and their mothers and fathers who also feel betrayed by the church they love.”

In a now-deleted Facebook post, Fr. David Muscat had suggested that a man who was suspected of raping and murdering a woman was “gay or bisexual” and “possessed by the devil.” Muscat also averred in the post that being gay was worse than being possessed.

Fr. Muscat was interrogated by police “over hate speech claims” regarding his Facebook post, according to the Times of Malta.

Muscat’s post, viewed by the once Catholic island nation as potentially “criminal,” also drew criticism from government officials who viewed the Church’s response as too lenient.

“Too little, too late. We have sounded alarm in the past years of how priest David Muscat was inciting hatred. Church action is now irrelevant. It is time for police action — as should happen with other denomination leaders preaching hatred,” tweeted  Cyrus Engerer, a Maltese gay activist who is a member of the European Parliament.

Too little, too late. We have sounded alarm in the past years of how priest David Muscat was inciting hatred. Church action is now irrelevant. It is time for police action – as should happen with other denomination leaders preaching hatred.https://t.co/QYPBX5B4ac@MaltaPolice

“Yesterday’s comment by David Muscat was removed by Facebook itself after it was verified that it was homophobic, apart from being criminal in Malta to incite hatred against minorities. I expected much better by the church. Hopefully, the justice system will not let us down too,” said Engerer in a follow-up Tweet.

Yesterday’s comment by David Muscat was removed by Facebook itself after it was verified that it was homophobic, apart from being criminal in #Malta to incite hatred against minorities. I expected much better by the church. Hopefully, the justice system will not let us down too. pic.twitter.com/Jikh1kb8nA

The nation’s “Equality” and “Inclusivity” ministers also chimed in. The Times of Malta reported:

“A line has been crossed, and I ask the authorities to take the necessary decisions, because one cannot make remarks which incite hatred or negative sentiment against a section of society,” Equality Minister Owen Bonnici told One TV’s Piazza programme.

Inclusivity Minister Julia Farrugia Portelli in a Facebook post said she had asked the police to investigate and act against Fr Muscat for his obscene and homophobic remarks against persons who were LGBTIQ. “I can never accept that anyone is insulted because of their sexuality,” the minister wrote.

In 2017, Archbishop Scicluna defended gay civil unions as a “service to the dignity of these people,” lending his support to a homosexual group within his diocese that draped a rainbow flag over a Catholic altar as part of a prayer service to end “homophobia.”

Under Scicluna’s watch, Drachma LGBTI – a group that campaigns for the Catholic Church to accept homosexual “marriage,” sodomy, and adoption of children by same-sex couples – has been given a free pass to meet in Maltese Catholic parishes, retreat centers, and in the Catholic chapel of the country’s only university.

Scicluna has not only presided at a Eucharistic celebration put on by the group aimed at ending “homophobia,” but he has used the occasion of the group presenting him with a newly published pro-homosexual book titled “Our Children” as a photo-op that was published on the archdiocese’s website.

In 2019, as a spokesman for the Vatican’s Abuse Summit, Scicluna did his best to decouple the overwhelming role of homosexuality from clergy sexual predation against minors.

Decades of widespread homosexuality in U.S. seminaries had “nothing to do with the sexual abuse of minors,” said Scicluna at a Vatican press conference at the time. He denied any connection between a homosexual subculture among the clergy and the sex abuse crisis.

Scicluna said that “to generalize about categories of persons is never legitimate.” He added that both homosexuality and heterosexuality are “human conditions that we recognize, and that exist, but they aren’t something that really predisposes to sin.”

Under Scicluna’s leadership, the bishops of Malta have also approved communion for divorced and civilly remarried Catholics if they are “at peace with God.”

“Archbishop Charles Scicluna has issued Fr David Muscat with a formal warning, referred to in Canon Law as a penal precept, instructing the priest to cease making inflammatory and hurtful comments in public forums or face prohibition from exercising his ministry in public,” said a press release published by the archdiocese.

“The Archbishop instructed Fr David Muscat to delete a Facebook post, in which the priest claimed that being gay was worse than being possessed, and not to use insulting or hurtful language against any group or individual,” continued the statement.

“The Archbishop also reminded Fr David Muscat that in accordance with Catholic teaching members of the clergy are required to show respect, compassion and sensitivity to people from all walks of life,” it concluded.