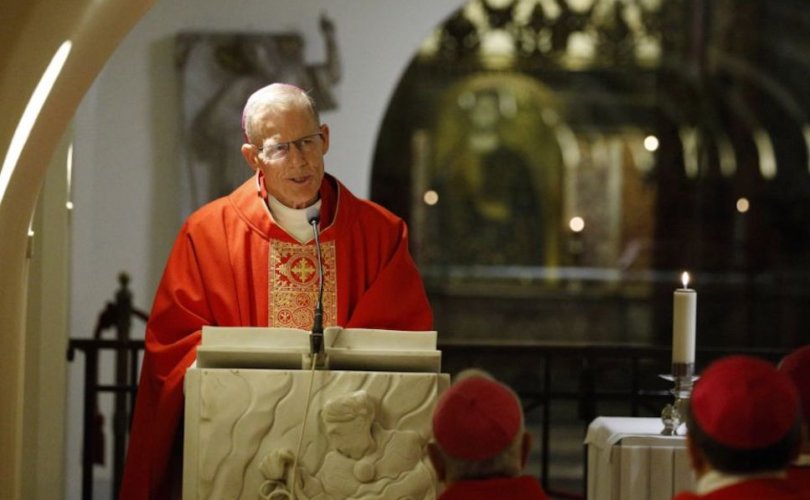 (LifeSiteNews) – The stunning corruption of the Catholic hierarchy under Pope Francis continues, this week most notably with Archbishop John Wester of Santa Fe, who published an essay on Sunday defending same-sex parenting and relationships and insisting that homosexuals should not be refused when requesting baptisms for their adopted children.

Wester, appointed to the Archdiocese of Santa Fe by Pope Francis in 2015, has a long record of supporting the LGBT agenda. He endorsed dissident Fr. James Martin’s infamous book Building a Bridge, hosted a conference of pro-LGBT priests in 2018, and for years has protected a heretical priest who officiated same-sex “weddings.”

But Wester’s lengthy July 31 article about baptizing children raised by homosexuals takes the prelate’s LGBT advocacy to a new level.

The essay, published by Fr. Martin’s pro-LGBT activism group Outreach, offers glowing praise for same-sex unions, appears to link them to “the domestic church,” and affirms homosexuals as “quite capable” of catechizing children by “loving one another” in their sinful relationships, which he praises for having “positive and virtuous qualities.” This article explains why he’s wrong about all of it.

Same-sex parents cannot bring up children ‘in the Catholic religion’

Refusing baptism to children of homosexuals living in grave public sin is “quite troubling,” Wester laments in his essay.

“I suspect that same-sex couples’ children are refused baptism because a judgment has been made that they cannot raise their child in the Catholic faith as LGBTQ parents. This is not true,” he contends. “To refuse baptism to these children solely on the basis of the fact that they have same-sex parents, while possibly done with good intentions, is not supported by church teaching or practice, in my view.”

It actually is supported by Church teaching, however. For licit infant baptisms, canon law requires “founded hope that the infant will be brought up in the Catholic religion.”

As the Catechism of the Catholic Church states, Sacred Tradition “has always declared that ‘homosexual acts are intrinsically disordered,’” in accordance with Scripture, which “presents homosexual acts as acts of grave depravity.”

Moreover, the Church affirms in the strongest possible terms God’s design for marriage and the family, recognizing the natural family as “the cradle and the setting” in which humanity enters the Church and as something intrinsic to human nature itself.

“The vocation of marriage is written in the very nature of man and woman as they came from the hand of the Creator,” the Catechism explains. “The family is the original cell of social life.”

Same-sex unions are not authentic families or ‘the domestic church’

Archbishop Wester tries to get around homosexual couples’ extreme rejection of Catholic teaching with several outrageous arguments, at one point appearing to suggest that same-sex households constitute “the domestic church.”

Wester writes, “Vatican II’s declaration on religious freedom, ‘Dignitatis Humanae,’ states that the family, ‘since it is a society in its own original right, has the right freely to live its own domestic religious life under the guidance of parents.’”

“Hence, not only is the church’s outreach one of welcome, but it is also incumbent upon the institutional church to respect the domestic church, the family,” he states, in the context of same-sex couples seeking infant baptisms. Wester later suggests that homosexual unions can provide a “loving family.”

But the Church’s definition of the family and the domestic church totally excludes same-sex relationships. “A man and a woman united in marriage, together with their children, form a family,” the Catechism specifies.

The Second Vatican Council’s pastoral constitution Gaudium et Spes also declares: “From the wedlock of Christians there comes the family, in which new citizens of human society are born, who by the grace of the Holy Spirit received in baptism are made children of God, thus perpetuating the people of God through the centuries. The family is, so to speak, the domestic church.”

The Church, in fact, teaches that homosexual unions bear no similarity whatsoever to the family.

“There are absolutely no grounds for considering homosexual unions to be in any way similar or even remotely analogous to God’s plan for marriage and family,” notes the 2003 letter of the Congregation for the Doctrine of the Faith (CDF) on same-sex unions, signed by Cardinal Joseph Ratzinger and approved by Pope St. John Paul II.

“Marriage is holy, while homosexual acts go against the natural moral law,” it stresses. “Not even in a remote analogous sense do homosexual unions fulfill the purpose for which marriage and family deserve specific categorical recognition.”

Indeed, the CDF warns that same-sex couples are so far removed from the reality of the family that allowing these couples to adopt is a form of “violence” against children:

Allowing children to be adopted by persons living in such unions would actually mean doing violence to these children, in the sense that their condition of dependency would be used to place them in an environment that is not conducive to their full human development. This is gravely immoral and in open contradiction to the principle … that the best interests of the child, as the weaker and more vulnerable party, are to be the paramount consideration in every case.

Wester’s defense of baptizing the children of same-sex households relies significantly on his claim that homosexuals can properly catechize children even while rejecting basic Catholic morals because of the “critical importance of love.”

“God is love and the most fundamental catechesis that a child can receive is to be loved, to return love and to be a member of a loving family. All other catechesis is based on this,” Wester writes.

However, if homosexuals cause serious harm to children by depriving them of a mother and a father and denying them a household “conducive to their full human development,” it’s impossible to say that they really love their adopted children, as “to love is to will the good of another,” in the words of St. Thomas Aquinas echoed in the Catechism.

In another paragraph, Wester goes so far as to claim that homosexuals are “quite capable” of instructing children in the Catholic faith by “loving one another”: “Without a doubt, same-sex couples are quite capable of teaching their children about the faith, by living lives that respect others, by remaining faithful to each other and by loving one another.”

But same-sex partners in their sinful relationships necessarily do not love each other, which requires willing the other’s good, and instead confirm one another in mortal sin – the worst of evils.

Faithfulness also makes no sense in the context of these relationships, which fall squarely in the category of intrinsic evil, and would absurdly involve fidelity to a wicked object.

“I believe that undue attention given to the fact that the couple is gay blinds the church’s minister to the abundance of positive and virtuous qualities that abide in their relationship,” Wester complains.

Homosexual partners may not “live up to all of the church’s teaching on marriage,” he adds, but they “give witness to many other aspects of Catholic life that form a coherent catechesis for children: commitment, fidelity, self-giving, honesty, humility, kindness, spiritual depth, church attendance, respect and so much more.”

“Hence, I see no reason why a couple would be refused when they present their child for baptism based solely on the fact that they are a same-sex couple,” the prelate concludes.

This is insanity. Again, “fidelity” or “commitment,” properly understood, cannot possibly apply to these unions, founded in disordered affections and gravely at odds with God’s Law.

Same-sex relations are certainly incompatible with “self-giving” and “spiritual depth”: “They close the sexual act to the gift of life. They do not proceed from a genuine affective and sexual complementarity,” as the Catechism puts it.

Rather than providing coherence to children, homosexual unions can only confuse them and plunge those who engage in them into spiritual death.

Wester offers another argument – reminiscent of the “slippery tactics” of Fr. James Martin – that while homosexuals do not form an “ideal family,” neither do many other families, and so it would apparently be inconsistent not to baptize their children:

While the ideal family, according to church teaching, is headed by one father and one mother, in reality we baptize many children from families who do not live up to this ideal. Some families have only one parent due to divorce, abandonment or death. Sadly, many families are fragmented by addiction, violence, dysfunction and poverty. In all of these cases, I am not aware that the norm is to refuse baptism to their children.

The fact that some families lack a mother or father in the home, however, does not change the fact that same-sex relationships are a total perversion of marriage and the family that cannot be compared to merely fractured families or ones separated due to death or other forces beyond their control.

Moreover, while illicit remarriages, for example, are seriously immoral, even they cannot be compared to homosexual unions, which lack all sexual complementarity and could never be convalidated by the Catholic Church.

Archbishop Wester later argues that no couple can live up entirely to God’s plan for marriage, suggesting that same-sex partners should not be singled out for failing to do so:

It is rather true that same-sex couples willfully refuse to live up in any way to the understanding of marriage intended by God, as “there are absolutely no grounds for considering homosexual unions to be in any way similar or even remotely analogous to God’s plan for marriage and family.”

Wester seems to confuse inevitable, human faults of married couples with the deliberate sin of sodomy.

The archbishop ends his article with a quote from Isaiah 55: “All you who are thirsty, come to the water!”

He neglects a critical part of that chapter: “Let the wicked forsake his way, and the unrighteous man his thoughts; let him return to the Lord, that He may have mercy on him.”