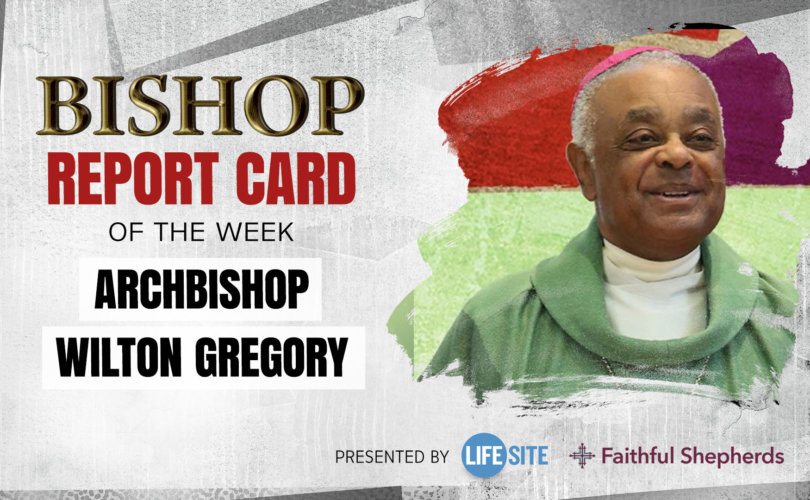 August 30, 2019 (LifeSiteNews) — Archbishop Wilton Gregory is this week’s Bishop of the Week for Faithful Shepherds, a website launched by LifeSiteNews in 2018 that encourages bishops to remain faithful to Christ by enabling laity to email, send personalized postcards, or call their bishops to urge them to uphold the Church’s perennial teachings.

Archbishop Gregory was recently installed as the archbishop of one of the most politically important sees in the U.S. — the Archdiocese of Washington. Prior to his high-profile appointment, Gregory was archbishop of Atlanta from 2005 to 2019' bishop of Belleville, Illinois, from 1994 to 2004; and an auxiliary bishop of Chicago from 1983 to 1994. He previously served as head of the U.S. Conference of Catholic Bishops.

Learn more about Archbishop Gregory’s past and sign up for the FaithfulShepherds.com newsletter by clicking here.

Gregory’s appointment came after a period of great scandal in the archdiocese. Gregory’s predecessor, Cardinal Donald Wuerl, resigned as archbishop after the Pennsylvania Grand Jury report revealed Wuerl to have been involved in a major sexual abuse cover-up while bishop of Pittsburgh. Wuerl denied knowledge of ex-cardinal Theodore McCarrick’s abuse of seminarians, only later to admit that he had been aware of McCarrick’s vile actions. Wuerl was present at Gregory’s instillation Mass as archbishop.

Many Catholics hoped the next leader of the Washington archdiocese would bring stability and orthodoxy. However, Archbishop Gregory’s liberal orientation and ties to Cardinal Wuerl indicate that faithful Catholics there got a social justice bishop more along the lines of Pope Francis.

In 2017, Archbishop Gregory delivered the keynote address at the annual meeting of the dissident Association of U.S. Catholic Priests. The group, which has over 1,300 members, most of them older than 50 years of age, is one of the most liberal and heterodox Catholic organizations in America. It has published essays calling for priest-less parishes, female deacons, married clergy, and pro-homosexual initiatives. Liberal prelates like Cardinal Blase Cupich, San Diego bishop Robert McElroy, and pro-LGBT bishop John Stowe have all attended the group’s meetings.

Archbishop Gregory is very supportive of “LGBT” issues. While bishop of Atlanta, Gregory did nothing to stop a pro-LGBT parish from promoting, participating in, and hosting a booth at, the Atlanta Pride Parade. Gregory also personally invited pro-gay priest Fr. James Martin to give a speech at the Shrine of the Immaculate Conception, titled “Showing Welcome and Respect to LGBT Catholics,” in 2018.

The radical pro-LGBT group Fortunate and Faithful Families placed an advertisement in the Archdiocese of Atlanta’s newspaper to thank Gregory for his “encouragement” of the group’s mission. Fortunate and Faithful Families describes itself as a group of “Catholic families affirming their LGBTQ members.” Gregory said Mass and gave a homily at the group’s annual retreats in 2014 and 2015. The retreats were held at the chancery of the Atlanta archdiocese.

On August 13, 2019, Gregory told a self-identified “transgender” person at a Theology on Tap event in Washington that “you belong to the heart of this Church” and “fit in the family” of the Church. Catholics “have to find a way to talk to one another” and have to “listen to one another,” he said.

Learn more about Archbishop Gregory’s past and sign up for the FaithfulShepherds.com newsletter by clicking here.

During an April 2016 interview, Gregory seemed to support allowing Catholics living in a state of adultery to receive Holy Communion. He stated that he was “enthused” to see that Amoris Laetitia “acknowledged the tremendous importance” of “the diversity of family situations.” In 2017, Archbishop Gregory was a featured speaker at a pro–Amoris Laetitia gathering at Boston College. The event, titled “Understanding Amoris Laetitia,” was organized by Cardinal Cupich. Gregory stated that Amoris Laetitia “challenges the church and its pastors to move beyond thinking everything is black and white, so that we sometimes close off the way of grace and growth.”

In addition to these troubling statements, it is unclear whether Archbishop Gregory sees abortion as a truly unique evil. While he has condemned abortion-providers like Planned Parenthood in the past, while president of the United States Conference of Catholic Bishops, Gregory appointed a pro-abortion attorney to the USCCB’s National Review Board. The attorney, Pamela Hayes, has made donations to the pro-abortion lobby EMILY’s List, as well as to pro-abortion politicians John Kerry and Hillary Clinton.

In 2017, Archbishop Gregory gave a homily at the Archdiocese of Atlanta’s Pro-Life Mass that equated abortion with other social justice issues. Gregory stated that the Roe v. Wade decision spawned the reintroduction of the death penalty and “the hostile treatment of our immigrant neighbors.” He then called on all Catholics to be equally “pro-life” in these matters.

Considering Archbishop Gregory’s increasingly prominent role in the Church, it would come as no surprise to see him continue to move up the Church’s hierarchy. When our bishops continue to stray from the Deposit of Faith, it is necessary for the laity to hold them accountable. If you would like to do your part to help hold our bishops accountable or view more of Archbishop Gregory’s past actions, please visit Faithful Shepherds.