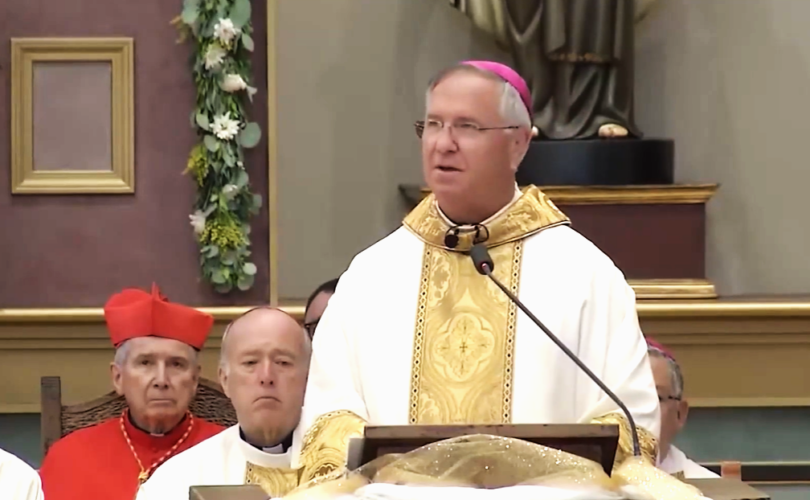 PHOENIX, Arizona (LifeSiteNews) — Bishop John Dolan was installed last week as the new Bishop of Pheonix, Arizona, despite cover-up of clerical sexual abuse cases in San Diego and a history of promoting LGBTQ groups and activities, including celebrating a Mass that featured a homosexual drag queen.

In 2017, during Dolan’s tenure as auxiliary bishop in San Diego, he celebrated a Mass in which he allowed a nationally known homosexual drag queen, “Nicole” Murray Ramirez, to speak from the pulpit after communion. The bishop also accepted an award from Ramirez acting on behalf of an international drag queen network called the “Imperial Court System.”

The Mass was offered for “families of the LGBT community” at St. John the Evangelist Church in Hillcrest, a predominantly homosexual neighborhood of San Diego. The celebration commemorated the 20-year anniversary of the U.S. Conference of Catholic Bishops’ (USCCB) heterodox letter on homosexuality, titled “Always Our Children.” The letter calls “experimenting” with homosexual behavior and conduct a “process of coming to terms with sexual identity.” It was censured by Rome shortly after its release.

When Dolan served as pastor of St. John the Evangelist Church, he had allowed a man in a same-sex “marriage,” Aaron Bianco, whom Bishop Robert McElroy had installed as pastoral associate at the parish the year before, to run parish programs and promote homosexuality and abortion in opposition to objecting parishioners, who pushed back on the heretical agenda, as LifeSite has reported. The assignment came only a year after Bianco had allegedly been removed as head of young adult ministry at St. Joseph Cathedral in San Diego in 2014 – prior to McElroy’s installment as bishop – for using Bible passages in support of LGBT lifestyles.

According to The Wall Street Journal, however, after McElroy came to the San Diego, Biano was assured his homosexual lifestyle was no hindrance to working for the diocese. Bianco said McElroy “let me know that [being homosexual] should not hinder me from participating fully in the life of the church.”

Standing in the good graces of both McElroy and Dolan, Bianco held the position of “program outreach associate” for the heretical “Catholic” organization Call to Action and took up several roles at St. John Evangelist parish. He led education programs, young adult and pastoral outreach ministries, and an “LGBT Bible study” group. He was even involved in marriage prep for young couples.

Again under Dolan’s leadership, Bianco promoted New Ways Ministry (NWM), a prominent LGBT group that supports same-sex “marriage” and “gender transitioning.” Dolan himself participated in the organization’s April 2017 summit “Justice and Mercy Shall Kiss: LGBT Catholics in the Era of Pope Francis.” Bianco also introduced pro-abortion material in the church vestibule at St. John the Evangelist while Dolan was pastor, and targeted orthodox parishioners, as Church Militant reported at the time.

In May 2021, Dolan and McElroy joined 12 other bishops in signing a statement written by a pro-homosexual lobby group telling “LGBT youth” that “God is on your side.” The statement notably remained silent on the Church’s teaching on sexuality and gender.

Dolan’s installment as bishop of Phoenix follows a trail of cover-up of horrific cases of clerical sex abuse in the Diocese of San Diego, including a satanic ritual rape of a woman by a now-laicized priest, Fr. Jacob Bertrand, who served at St. John the Evangelist just prior to Dolan’s arrival.

As reported in a recent interview with Crisis Magazine, abuse survivor Rachel Mastrogiacomo gave details of the diocese’s efforts to protect the priest until it was forced to remove him from ministry due to public prosecution in 2016. This came two years after the priest admitted guilt in the presence of diocesan administrator and later the vicar general, Fr. Steven Callahan, in 2014.

As LifeSiteNews previously reported, “Prosecutors accused the diocese of withholding key files about the priest, who ultimately pled guilty to criminal sexual conduct in the third degree and faces 10 years’ probation. Bertrand’s case reflects an apparent pattern regarding abuse of adults that persisted into Dolan’s time as auxiliary bishop, vicar general, vicar for clergy, and moderator of the curia.”

In response, Jesse Romero, Catholic evangelist and co-founder of Virgin Most Powerful Radio, called on the new bishop to lead his flock by preaching the truth of the Gospel. “True love,” Romero said, “is willing the salvation of the sheep in your diocese. How do you will their salvation? By giving them the truth, not by giving them wide parameters.”

Dolan replaces Bishop Thomas Olmsted, who led the Diocese of Phoenix since 2002. Olmsted was known for his orthodoxy and outspoken defense of human life and the Church’s moral teaching on marriage and sexuality. One of the first things Olmsted did in Pheonix was establish a Carmelite cloister of nuns to assure prayers for the diocese.

Olmsted forcefully opposed abortion in his 2021 apostolic exhortation Veneremur Cernui, forbidding any pro-abortion “Catholic” official or politician “from receiving Holy Communion until they publicly repent and receive the Sacrament of Penance.” Olmsted was also a longtime champion of the family. In a 2016 interview, he denounced same-sex “marriage” as a “falsification” of marriage and said that Christians must publicly oppose it even in the face of persecution. His 2015 apostolic exhortation “Into the Breach” rallied Catholic men to the fight for life and family, condemning LGBTQ ideology and the Sexual Revolution as part of a diabolic attack against families, society, and the Church.

‘Nobody can understand this’: Cdl. Müller criticizes promotion of ‘politician’ Bishop McElroy