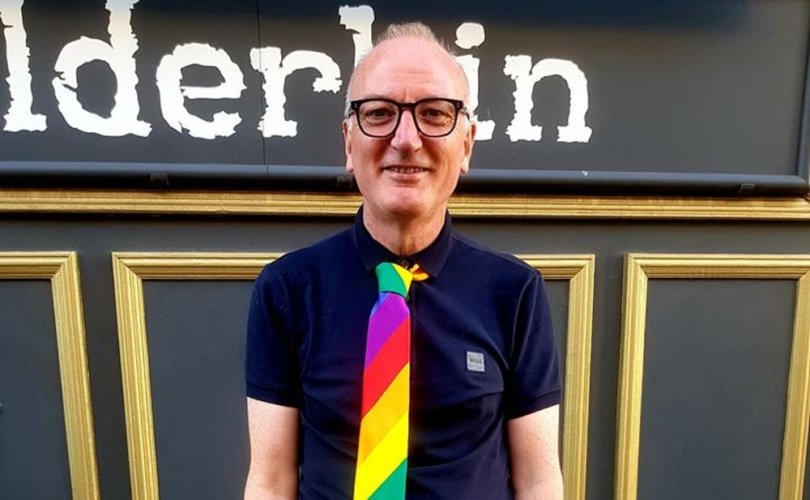 MOTHERWELL, Scotland, July 20, 2018 (LifeSiteNews) — A priest who made headlines for supporting the introduction of gender theory to Catholic schools has now attacked a faithful priest who refuses to burn incense before Emperor LGBT.

Morris had just been dismissed as Catholic chaplain at Glasgow Caledonian University after holding a rosary service in reparation for what his parish advertisement called “the gross offence to God that is Pride Glasgow.”

“You will know by now that your invitation and this initiative has deeply hurt both many of our own Catholic people who identify as LGBT and many others too,” Morton wrote on Facebook, under a short introduction for readers who didn’t know of Father Morris’ rosary service.

“I presume in doing this that you have come to a negative judgement about Pride and perhaps also members of the LGBT community,” Morton continued. “You should know that not everyone shares your views either about this event or about LGBT people. Many have especially come to see Pride as an event that is both a culturally liberating and joyous moment in the lives of people who identify in this way.”

Morton told Morris that he was risking “a deeper alienation of our own Catholic people and the wider community.”

“It is not my place to make a judgement of your decision [to have a rosary of reparation], but if it were, I would say that it was ill thought out and ill advised,” said the Motherwell priest.

He claimed that prayers of reparation are said “only in the most serious of circumstances”.

Morton’s post, to which his readers responded with praise, was published Thursday. It had disappeared by Friday afternoon, along with the St. Bride’s RC Church Facebook page.

The subject of Morton’s ire, Father Morris, has not made any known public statements about so-called “sexual minorities,” other than that they are called to a life of chastity.

In contrast, Morton has made headlines by supporting LGBT causes and criticizing what he deems a “negative stance” in the Catholic Church.

A year ago he posted a special “welcome” to homosexuals on the parish Facebook page that went viral.

In it he said, “We must do everything we can to redress the harm that has been done in the past by the negative stance we seem to have taken up. In God’s house all are welcome and are the blessed and loved children of God. There should be not place in our language or our attitude which allows for prejudice or exclusion. We must join with others who are seeking to build a more inclusive society.”

This won him the accolades of a same-sex “married” Catholic Scottish MP and activist, Gerard Killen, who said that he and his “husband” would drop by St. Bride’s that weekend to “show support” for the parish.

That October Morton was in the headlines again for supporting the Time for Inclusive Education (TIE) campaign, which is working with the Scottish government to introduce an LGBT inclusive education to all Scottish schools.

Morton told the Scotsman newspaper: “As a Catholic priest I have met many people who struggle with their sexuality, and I know the great harm that this has done in the lives of many men and women. I want this to be a thing of the past and I believe that this is the intention behind the TIE Campaign.”

“It is clear the TIE campaign is on the front-line of reaching out to young people in Scotland who are trying to understand both their sexuality and their identity. I cannot help but be impressed by both the clarity and vision that they have for their work. Most of all I want to give my unequivocal support to those who will benefit from it – a huge number of young people across the length and breadth of Scotland.”

Once again Fr Morton was praised by LGBT activist and MP Gerard Killen, who said that Morton’s comments represented a “very important step forward for the TIE campaign.”

Jordan Daly of TIE told the Scotsman that his organization was ”delighted and encouraged by Father Morton’s support for our campaign. This is culturally and historically significant, as his stance further highlights that having faith and supporting LGBT rights are not mutually exclusive nor controversial.”

Last month Morton was awarded for his endorsement of the campaign with a rainbow tie at a ceremony celebrating its third anniversary at Scotland’s Parliament.

Since Morton’s St. Bride’s RC Facebook page has disappeared, references to Morton have apparently begun to disappear from the TIE campaign website although, at press time, his face remained among the photographs of its distinguished supporters.

A Scottish Catholic has told LifeSiteNews that she and other Catholics have been writing to “each and every one of the Scots bishops to ask them to act against priests who are either attacking or refusing to uphold Catholic sexual morality.”