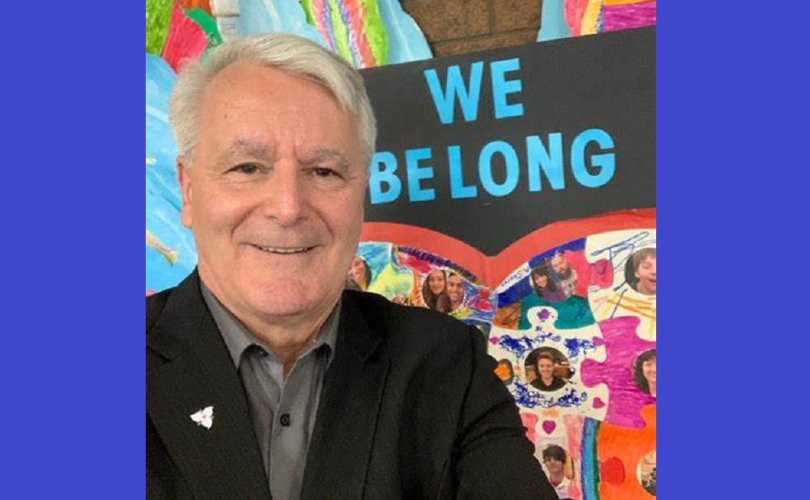 TORONTO, November 26, 2019 (LifeSiteNews) — A trustee running for chair of the Toronto Catholic school board is claiming that a message to him from a Christian parent that references Matthew 18:6 is a “death threat.”

Markus de Domenico received the email after LifeSiteNews reported Monday that he misrepresented his views on gender ideology and sex education on the questionnaire he submitted for the 2018 municipal election to Campaign Life Coalition, Canada’s national pro-life, pro-family lobbying group.

The incumbent Catholic trustee for Ward 2, de Domenico checked “yes” to the question of whether he would oppose the teaching of gender ideology in the schools, and “yes” to supporting the repeal of the Kathleen Wynne sex education curriculum.

But de Domenico has been a vocal proponent of including the terms “gender identity” and “gender expression” in the TCDSB’s code of conduct.

Moreover, during the heated debate on the motion, de Domenico described the Church’s teaching on homosexuality as “judgmental” and suggested that Catholics don’t hold that view anymore.

“Our system that we have now does not believe in the issues that gave” LGBT students “that kind of bullying problem. Fundamentally, we don’t believe in it,” he added.

Now de Domenico says that because of the LifeSiteNews report on his misrepresentation, he’s received an emailed “death threat” that could warrant legal action.

As a good Catholic I'm sure you are aware of the special place prepared for those who cause the “little ones” to sin. Something about a millstone necklace and a swim?

I’m sure you're equally aware of the rather warm place The Lord has for liars. You concerned about global warming? Hey, hey!

What is your soul worth? Apparently someone has given you that item or amount. Is temporary gain worth paying eternal agony?

Be careful what you choose! The Lord is watching!

De Domenico interpreted the first paragraph, which is based on Matthew 18:6 — “But whoso shall offend one of these little ones which believe in me, it were better for him that a millstone were hanged about his neck, and that he were drowned in the depth of the sea” — as a threat to his physical well-being.

“I received this death threat as a direct result of your email smear campaign,” he wrote LifeSiteNews.

“I will contact the police and our boards legal team to let them know that this person along with you Lianne have exposed myself and my family to a death threat,” added de Domenico.

“You may be held criminally and civilly liable. You may be prosecuted. You have been notified. God forgive you for your hatred.”

Rizzo, who spearheaded the campaign to add the terms to the code of conduct, has also been receiving emails from Catholic electors critical of her stance.

A number of these have received a “cease and desist” letter from the TCDSB chair, which states, in part: “Pursuant to your harassing communication directed to me and these sent emails copied to the Director of Education, Rory McGuckin and other trustee members of the Toronto Catholic District School Board I will not hesitate to contact the police to report your actions if you continue to contact me. If you do not cease your unwelcome and harassing communications immediately, I will take legal action against you.”

“I’m rather surprised to see this sort of violent reaction from de Domenico against the words of our Lord and Saviour,” Jack Fonseca of Campaign Life told LifeSiteNews.

“This is a brave new Catholic world indeed, where sinful ideologies are warmly embraced by trustees, but the words of Jesus Himself cause them to recoil in horror, fear, and revulsion,” he added.

“I truly hope that the other trustees do not make such a foolish decision as to elect this person as Chair of the entire board. A person who seeks such responsibility should at least be familiar with the New Testament,” Fonseca said.

Campaign Life gave de Domenico a “green-light rating” based on his responses to the 2018 questionnaire, but they’ve changed that to red based on the trustee’s voting record, Fonseca noted.

“Either de Domenico had a conversion to the LGBTQ cause after answering our questionnaire, or he misrepresented his true beliefs in order to get our endorsement before the election,” he told LifeSiteNews.

“If the latter, which does appear to appear to be the case, then it speaks to a lack of integrity, a lack of ethics, and a willingness to use outright deception,” Fonseca said.

Rizzo, de Domenico, and allies insisted that the board had to comply with the ministry directive PPM128, which mandated that all school board codes be in accord with the provincial and the Ontario Human Rights Code, and that not to add the terms would harm students who identify as homosexual or transgender.

Those opposed to the change argued that adding the terms would entrench the false gender ideology in Catholic schools and harm and confuse vulnerable students, and that Catholic schools have the constitutional right to uphold Catholic teaching.

However, four days after the trustee vote, the Toronto archdiocese conceded in a November 11 statement that it had accepted that the terms included in the code, while also claiming: “We do not accept the view of the human person which underlies this terminology, since that view is not compatible with our faith.”

Correction, November 27: This article originally referred to the writer of the email to trustee de Domenico as a Catholic voter. LifeSiteNews regrets the error.