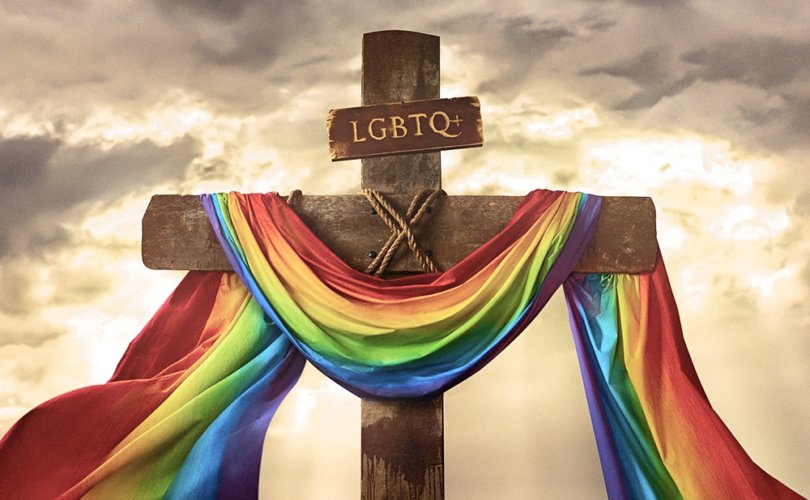 The film, “Wonderfully Made,” was created by Jewish filmmaker Yuval David, a homosexual “married” to a Catholic man, Mark McDermott.

The purpose of the movie is apparently to fill a “significant gap” in Christian iconography, namely “an LGBTQ+ depiction of Jesus,” David told amNew York Metro in an interview.

According to David, Wonderfully Made “explores the tension between LBTQ+ Catholics — who are often rejected from participating with their religion due to their sexuality and gender identity — and also have no visual representation, which is especially exclusionary in a faith where iconography plays such a huge role.”

“Recognition of this rejection through my photo art project organically turned into the idea of reimagining Jesus as a member of or supporter of the LGBTQ+ community,” the director continued.

David claims to have been moved to create a “gay Jesus” after conversations with his Catholic “husband” revealed that McDermott “felt there was not a place for him in the same way as there was a place for straight people (in the Catholic Church).”

David also boasted that he interviewed “heroic nun” Sister Jeannine Gramick, “a formidable advocate who has been ministering to LGBTQ+ people since 1977.” David noted that the nun, co-founder of New Ways Ministry, an ardently pro-homosexual advocacy group, had received “a directive from the Vatican in 1991” to discontinue her work with homosexual persons on the basis that she did “not faithfully convey the clear and constant teaching of the Catholic Church” regarding “the intrinsic evil of homosexual acts and the objective disorder of the homosexual inclination.”

“Hierarchical requests did not deter her,” David pointed out, before calling her “a true woman of faith.”

The film’s promotional website explains that it “is the first of a planned docu-series, ‘LGBTQ+R(eligion),’ each episode of which will focus on other faith traditions and LGBTQ+ identities.” “Wonderfully Made” focuses on Catholics” depicting Jesus in solidarity with the LGBTQ+ community.”

During an interview within the film, Massingale describes his “dream of a church where two men and two women can stand before the Church, proclaim their love and have it blessed in a sacrament of marriage,” contravening the clear teaching of the Church on the nature of sexuality and, indeed, marriage.

The Catechism of the Catholic Church clearly enunciates, in entry 2357, that, based on Sacred Scripture, “which presents homosexual acts as acts of grave depravity,” the Church has consistently instructed the faithful that “homosexual acts are intrinsically disordered.” “Under no circumstances can they be approved.”

In spite of the moral teaching regarding homosexual acts, Massingale added that, in his dream, “their love (homosexual relationships) would be seen as divine. That God is present in that relationship. When we look at their relationship, we touch God.”

The movie provides a platform to a number of activists who seek to undermine to Church’s immutable position on homosexuality. Marianne Duddy-Burke, executive director of DignityUSA, an organization dedicated to assist “lesbian, gay, bi, trans and queer Catholics to experience dignity through the integration of their spirituality and their sexuality,” says in the film that homosexuals must be assured: “You are holy. You have the breath of God within you.”

Also speaking in the film, Fr. Martin explains that “(w)hen you look at the gospels, you see that Jesus reached out specifically to people who are on the margins. And so, I think if Jesus were here today, in the flesh, on earth, he would be going first to LGBT people. For Jesus, there is no us and them. There's just us.”

Martin has famously espoused heretical, pro-homosexual alterations to the Church’s doctrine, claiming that the requirement for single people to remain chaste is not binding on homosexuals: “For a teaching to be really authoritative, it is expected that it will be received by the people of God, by the faithful. The teaching that LGBT people must be celibate their entire lives has not been received.”

Martin also received much backlash recently for tweeting a blasphemous picture of Our Lady of Czestochowa, depicting the Blessed Virgin Mary and Christ-child with halos colored with rainbows. Martin captioned the image, saying “(the) LGBT community has few images like this. So it is not surprising that they would add their own symbol, the rainbow, in a respectful way, to a beloved image of their mother.”