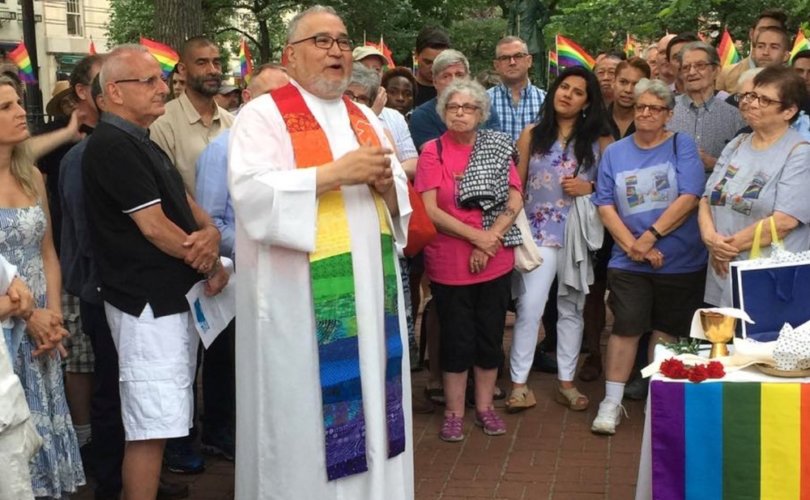 November 26, 2018 (LifeSiteNews) – In a tepid call for prayer for recently deceased Bishop Robert Morlino, the New York City LGBT ministry known as Out at St. Paul implied that the group views the stalwart defender of Catholic teaching as an “enemy.”

“Say a prayer for Bishop Robert Morlino, who died last night. He was one of the most outspoken opponents of LGBTQ people in the Catholic Church,” tweeted the group, adding, “‘But I say to you, Love your enemies: do good to them that hate you: and pray for them that persecute…’”

The parish group, a favorite of pro-gay Father James Martin, SJ, participates in and promotes homosexual “pride” events, promotes groups that encourage those with same-sex attraction to embrace and act on it, and otherwise implicitly encourages those suffering with same-sex attraction or gender dysphoria to act upon their inclinations in conflict with Church teaching.

Bishop Morlino, on the other hand, was consistently firm in his support of orthodox Catholic doctrine and the Gospel of Life and recently showed that he was not afraid to speak out against the politically sensitive issue of the role homosexuality has played in the ongoing clerical sexual abuse crisis. On August 18, 2018, he released a blistering letter demanding that the “depravity of sinners within the Church” be rooted out.

The Out at St. Paul tweet sparked a backlash of comments critical of the group’s thinly-veiled insult to Bishop Morlino.

“Really! Announcing the Bishop's death with a dubious request for prayers, while taking a shot at his moral stance on issues which you describe as opposing LGBTQ. Should this be considered charitable?” asked Ewart Harris.

Really! Announcing the Bishop's death with a dubious request for prayers, while taking a shot at his morsl stance on issues which you describe as opposing LGBTQ. Should this be considered charitable? I guess it is your same lack of rationality that affected any debate with him.

“You just twisted and maligned a bishop, who spoke the truth for the sake of people of the LGBTQ movement or persuasion,” noted Rannie R. Ramos, adding, “Very classy.”

“No, he was a proponent of life in Christ, love in Christ and truth in Christ,” wrote one user. “Read Matthew chapter 19 [about] Jesus and the rich young man to see this truth in ‘great love.’ Death to self has to happen for the Kingdom of God. I know this sacrifice [–] it's worth it.”

“That is a blatant #lie,” countered another. “+Bp. Morlino was a compassionate shepherd to ALL who were seeking freedom from the bonds of sin. He did not ‘oppose’ self-identified LGBT individuals; he simply didn't ratify them in their sins. It’s called genuine Christian charity.”

“Is this how the lgbtq+ community at a Catholic Parish acknowledges the death of a bishop?” asked another. “Showing your true colors Out at St Paul. Are you that needy that it's necessary to bully folks into accepting homosexual acts as normal?”

“Not very Godly to trash someone within an ‘in memoriam,’” responded DeberaAne.

The tweet about the Bishop of Madison’s death by Out at St. Paul is unsurprising, because he stood up against forces within the Church seeking to weaken Church teaching.

Morlino quickly became a polarizing force after his installation on Aug. 1, 2003, gaining a national reputation for vigorously opposing abortion and same-sex unions. Under his tenure, more young men studied to become priests, Latin masses made a comeback in some areas and priests were encouraged to use only boys and seminarians as altar servers.

In announcing his death, the diocese said Morlino’s three priorities were to “increase the number and quality of the men ordained to the diocesan priesthood, to instill a greater sense of reverence throughout the entire diocese … and to challenge Catholic institutions in the diocese to live out their professed faith in Jesus Christ … through their ministry in the secular community.”

LifeSiteNews reached out to the Archdiocese of New York, home of Out at St. Paul, seeking comment on the group’s tweet. The archdiocese did not respond by press time.