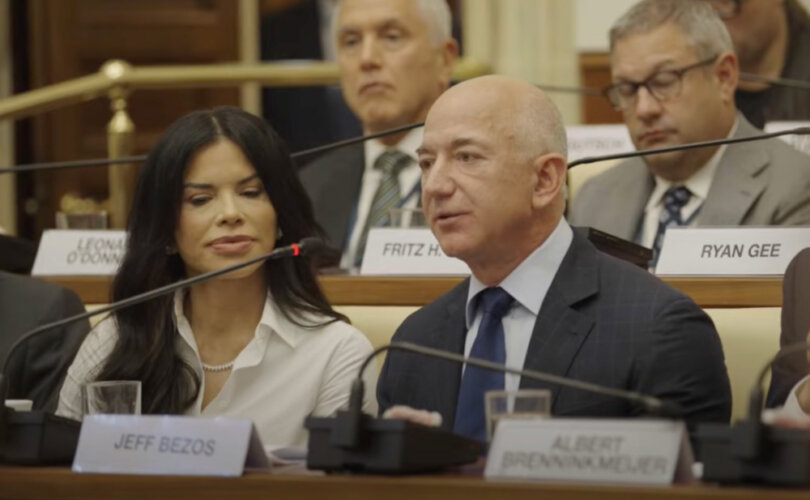 The award ceremony was a joint event organized by the Galileo Foundation alongside a number of groups, including Pope Francis’ Global Compact on Education, the World Congress of Muslim Philanthropists, and the Jewish Funders Network.

The event was attended by a number of key Vatican Curial cardinals, such as Secretary of State Cardinal Pietro Parolin and Cardinal Peter Turkson, the chancellor of the Pontifical Academy of Sciences.

Bezos was joint recipient of the award along with Chef Jose Andres, founder of the World Central Kitchen. Accompanying the divorced Bezos at the Vatican was his current girlfriend, Lauren Sanchez, who is also divorced.

“As we all know, in 2015, the world agreed to 17 Sustainable Development Goals for 2030,” he stated. “We gave ourselves 15 years. One would hope that we would find ourselves on track. Unfortunately, we are falling short on almost every goal.”

Referencing the “rising cost of food, fuel, and fertilizer,” Bezos argued that this was due to human “pressure” on the planet.

We as a species have now grown to occupy every corner of our world. Every crevice and peak explored and exploited. The pressure that we are placing on our natural world can no longer be ignored. Compared to the planet, humanity used to be small. Our impact very minor. But for some time now, we have wielded the power to cause a significant impact to this planet.

While proposing schemes to tackle poverty and hunger, Bezos also called on the assembled Curial officials and global “philanthropists” to “invest in our common home,” warning that “the world is warming, the seas rising, and the storms intensifying.”

READ: Pope Francis’ American cardinals are pro-LGBT revolutionaries with a radical agenda for the Church

— Article continues below Petition —
Stand with Christian daycare worker fired for refusing to indoctrinate kids with LGBT agenda
Show Petition Text
7479 have signed the petition.
Let's get to 7500!
Thank you for signing this petition!
Add your signature:
Show Petition Text

UN 2030 Goal #5.6, to “achieve gender equality and empower all women and girls,” includes the following aim: “Ensure universal access to sexual and reproductive health and reproductive rights,” which is phraseology commonly used to refer to abortion and contraception.

Bezos himself, despite being honored with the Vatican-backed award, is both pro-LGBT and pro-abortion. In 2021 he donated $100 million to former President Barack Obama’s pro-abortion and pro-LGBT foundation, making it the largest individual donation at the time.

This financial support for the LGBT movement from Bezos is consistent, only gaining traction in recent years as Bezos’ Amazon took an active role in promoting “Pride month.”

Prior to the overturning of Roe v. Wade, Amazon also signalled its support for the abortion lobby, revealing that it would pay employees $4,000 a year in travel expenses for treatment of non-life threatening issues, including the so-called “treatment” of abortion. Amazon has also funded major abortion provider Planned Parenthood through its AmazonSmile donation program, through which Amazon consumers can give 0.5 percent of every purchase to a “charity” of their choice.