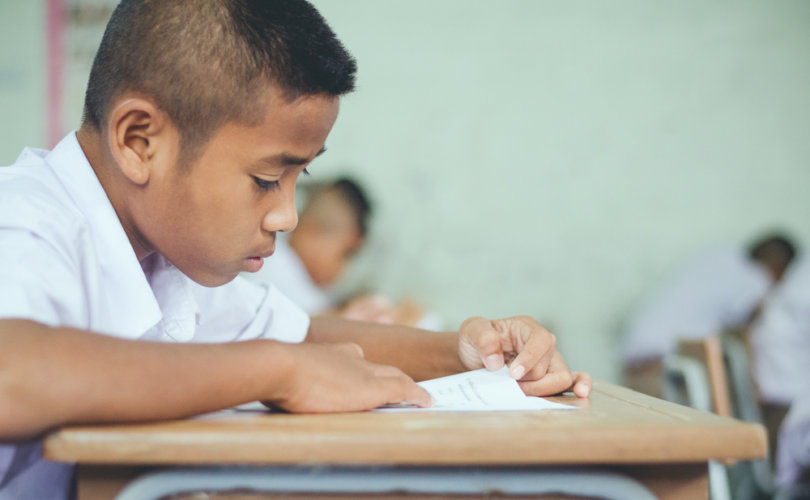 CAMBRIDGE, New York, November 3, 2017 (LifeSiteNews) – A New York school teacher was suspended on Tuesday after parents took to social media to complain about the teacher handing out graphic reading material on homosexuality and transgenderism to 11-year-old students.

Not only was health teacher Jacqueline Hall of Cambridge Central High School suspended (with pay), but a second day of lectures by an employee of the Pride Centre of the Capital Region was cancelled, according to The Post-Star.

Parent Sirell Fiel was so distressed by the material his son brought home that he took to social media on Monday and made a video to warn other parents. The video went viral, being viewed more than 350,000 times as of this writing.

In the video presentation, Fiel says that when he asked his 11-year-old son what had happened at school that day, the child replied that his class had been visited by a person with no gender. Fiel sat down with his son to help him with his homework and found the handouts on “gender identity.”

“When it comes to teaching our kids certain things, that should be left up to us,” he said. “Not the school district. Not health class in seventh grade.”

The father of two told fellow parents that if they haven’t seen the 42-page packet yet, they should be searching their children’s books.

He objected to a list of words and phrases in the handout, singling out a word used to describe the passive role a man takes who is being sodomized by another man.

“This is something my eleven-year-old definitely does not need to know in health class in seventh grade,” he said. “Unacceptable.”

According to Fiel, his son was going to be tested on the information provided the next day in class.

“Genital reconstruction surgery!” Fiel exclaimed, working through the extensive list. “Is that really something an eleven-year-old kid should be learning and knowing about? Nah. I don’t think so.”

Fiel ruefully observes that he’s a truck driver and swears—he struggles to present the obscene material without doing so—“but” he said, “there’s a line.”

He was furious that parents were not informed beforehand that this material would be presented to their children.

“They are literally taking the innocence out of our children every day with this BS,” he said.

This is apparently the second time the school has presented Fiel’s child with objectionable material. In his video, the father advised parents always to check what their children have for homework.

“The parents have concerns, and they are mine as well,” he said, reported The Post-Star.

The superintendent claimed the school district had never had such an issue before and may have to make some policy changes because of it. Suspending the teacher with pay was “standard procedure,” he said.

“This is not what we would normally do,” he said, “and you can be rest-assured it will not happen again.”

The Pride Centre of the Capital Region advertises its services as an educator on its website. It says there that “training and education is an essential component in creative safer schools and community spaces for LGBTQA young people” in New York’s Capital Region. The Pride Centre has been giving presentations to K-12 schools, among other institution for over 20 years.