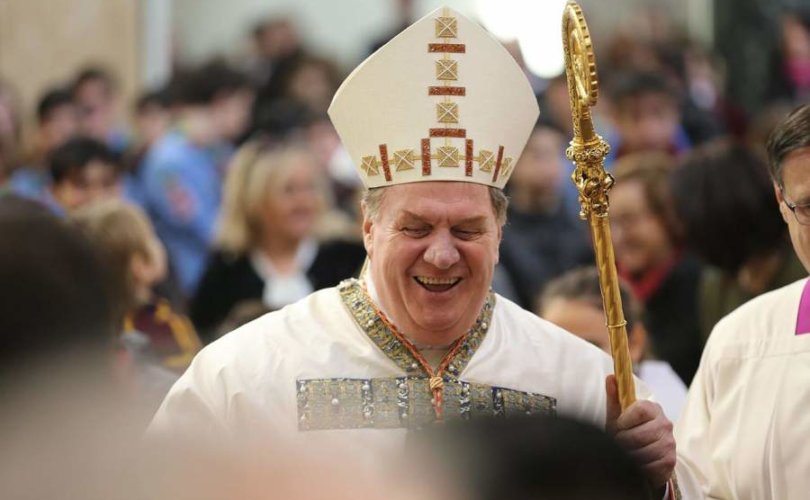 BOSTON, Massachusetts, September 16, 2020 (LifeSiteNews) – Cardinal Joseph Tobin, who supports homosexuality, stated that Catholics in “good conscience” could vote for pro-abortion Democratic presidential candidate Joe Biden. Tobin’s de facto endorsement, where he mentioned Biden by name, contradicts the country’s top pro-life priests who have warned that “no Catholic can vote for Joe Biden” because of his radical abortion advocasy.

The Archbishop of Newark, New Jersey went even further, stating that he has a “more difficult time” with the “other option,” not mentioning President Trump by name.

The Cardinal made the comments during a webinar on “The Church and Catholic Voters in the 2020 Election.” The event was hosted yesterday by Boston College’s Boisi Center for Religion and American Public Life.

Cardinal Tobin gained notoriety in 2018 for tweeting, “Nighty-night baby. I love you.” He later deleted the Tweet and claimed it was “meant as a private communication with one of my sisters.” Beyond that, Tobin lacks credibility among numerous faithful Catholics in the United States. Among other things, he backed homosexual activists, such as Fr. James Martin, and personally welcomed an “LGBT Pilgrimage” to his cathedral. His position is that the Church is “moving on the question of same-sex couples.”

Contradicting Cardinal Tobin, several members of the hierarchy have come out in recent weeks and months, indicating that Catholics cannot vote for pro-abortion candidates like Joe Biden and Kamala Harris, as well as the Democratic Party as a whole because of its pro-abortion platform.

Bishop Joseph Strickland of Tyler, Texas, endorsed a video by Fr. James Altman in which he argued no Catholic could vote for the Democrat Party in the upcoming election.

“As the Bishop of Tyler I endorse Fr. Altman’s statement in this video,” the bishop wrote on Twitter. “My shame is that it has taken me so long. Thank you Fr Altman for your COURAGE. If you love Jesus & His Church & this nation…pleases (sic) HEED THIS MESSAGE.”

Bishop Rick Stika of Knoxville, Tennessee, tweeted, “How can a person say they are a faithful Catholic and yet support those who support the ultimate child abuse and human rights violation of those yet born? Slavery was legal at one time and yet now we look at it with horror. A child yet born is not the property of another.”

“A child not yet born is a total human person that must be protected,” he affirmed. “This nation will continue to decline if abortion continues. Those who love life will never go away and will continue to fight. The cause is just as it is the promotion of the dignity of the human person.”

Fr. Frank Pavone, head of Priests for Life, said Biden’s “failure to protect the unborn puts him not only in conflict with the Catholic faith but with the Christian Gospel, the Founding principles of America, the very meaning of public service, and basic human decency. You can’t kill babies, and you can’t authorize anyone else to do so.”

Fr. Stephen Imbarrato, a regular on EWTN and a member of Red Rose Rescue, explained, “Many people respond to my comments with, ‘what about Trump?’ This is not about Trump. Trump isn’t even Catholic. This is a Catholic issue. A Catholic can’t vote for Biden whether they feel in good conscience they can or can’t vote for Trump.”

Pro-life groups have condemned Joe Biden and his running mate, Senator Kamala Harris, as the “most pro-abortion presidential ticket in American history.”

As Pope Benedict explained in 2006, there are some “principles which are not negotiable” in the political arena. Among other things, the Holy Father mentioned the “protection of life in all its stages, from the first moment of conception until natural death.”

According to Pope Benedict, this was not even a Catholic position, but one derived from natural law, “inscribed in human nature itself and therefore … common to all humanity.”

Both Biden and Harris have made clear that, instead of protecting life, they would make it easier for women to procure abortions, both within the United States and abroad.

Roe v. Wade is the 1973 Supreme Court ruling essentially legalizing abortion across the country under the guise of a woman’s right to privacy. Many states passed legislation trying to limit the widespread killing of unborn babies. Some legislation includes so-called heartbeat bills, which prohibit abortions as soon as the unborn baby’s heartbeat can be detected after roughly six weeks of pregnancy.

Most recently, the Trump administration began moving to further strengthen the Mexico City Policy by extending the existing ban to contracts with entities that provide foreign aid. Shortly after taking office in 2017, the President not only reinstated the Mexico City Policy, but took the additional step of expanding it.

The policy, officially known as Protecting Life in Global Health Assistance, currently applies to foreign aid disbursed through grants and cooperative agreements, but the new rule proposed by the State Department would also exclude entities that receive foreign aid via contracts, regardless of whether those entities technically fund their abortion-related practices via separate sources.