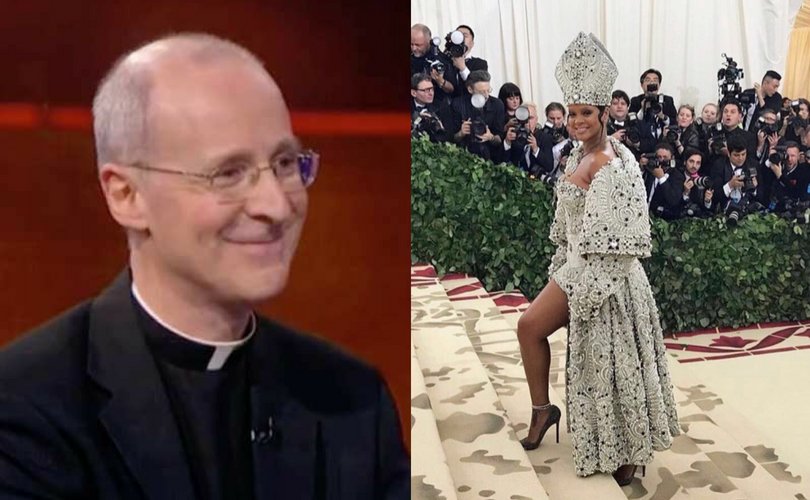 NEW YORK, New York, May 10, 2018 (LifeSiteNews.com) – Fr. James Martin, a Vatican advisor and Jesuit priest who has established himself as an advocate of LGBT causes, tweeted from the Met Gala on Monday that a fellow attendee told him “I love that you got dressed up as a sexy priest.”

Martin listed other comments he received, including, “Funky outfit,” “I love your costume,” and “Is that, like, for real?” in reference to his priestly suit and collar.

Martin also “praise[d]” Cardinal Timothy Dolan, Archbishop of New York City, for attending the event, opining that it “was wonderful that the local ordinary supported this historic exhibit on Catholicism.”

Martin has spoken positively of homosexual relationships and claims that gay couples should be able to kiss each other during the sign of peace at Mass. He claims the Bible has been “taken out of context” in its condemnation of homosexual acts, and has re-tweeted a complaint that Catholic priests can’t bless same-sex unions. Hispanics condemned him in 2017 for re-tweeting an immodest image that seemed to parody Our Lady of Guadalupe.

The Met Gala is an annual fundraising event for the Metropolitan Museum of Art's Costume Institute in New York City. Numerous celebrities attend every year dressed in often immodest and sexually provocative costumes corresponding to that year’s theme.

This year, the Met Gala’s theme was Heavenly Bodies: Fashion and the Catholic Imagination, and included a number of women’s outfits in the style of bishops’ liturgical vestments or sporting sacred symbols of the Catholic faith.

Pop star Rihanna dressed in a sexually-provocative outfit made to look like papal vestments, and Madonna Ciccone wore a dress with a cross shape carved in front of it to reveal her chest.

The exhibit included a sadomasochistic bondage mask covered in rosaries.

But rather than condemning the event, the Vatican supplied vestments for an accompanying clothing exhibit, and sent the boy’s choir of the Sistine Chapel to sing for partygoers. Cardinal Timothy Dolan called it a “great evening” and “the social event of the year.” He later denied that the event was blasphemous.

However, many Catholics condemned the event for blaspheming and insulting the Catholic religion, as well as for its poor taste. Among them was the British journalist and fallen-away Catholic Piers Morgan, who asked, “What the hell was the Vatican thinking?” Others included Raymond Arroyo, Ross Douthat, Laura Ingraham, and Matthew Schmitz at First Things.

“Something very sad and desperate going on here,” wrote Sciambra on his Facebook page. “James Martin, this doesn’t mean anything. Every time I outreach in the gay community, I get hit on and hear meaningless compliments. But I’ve never felt the need to reveal that fact; except now. That someone said such a thing to Martin is not important, that he recounts the incident in detail – is very telling.”

“Who didn’t hug Martin when he was a boy?” asked Sciambra, who added, “It seems he needs constant praise and reassurance – for now, he has found a deep well in the Catholic LGBT community. . . . Too bad whatever is going on inside his mind had to play out on the world-stage. Sometimes, I just feel kind of sorry for him.”

“Anyone shocked that James Martin was mixed-up in the whole Met Gala?” asked Sciambra in another Facebook post. “That's part of the plan, and has been for a long time – get a few gullible and greedy Bishops to mix with wealthy/well-connected members of the LGBT community at $30,000 a pop cocktail parties – meet the same-sex partner, listen to how uncharitable the RCC is to gay couples, approve the dissident ministry, go back to the chancery feeling good about yourself. We just changed the Church. It worked with Cardinal Schonborn. Easy.”

Sciambra lamented the loss of the sense of the sacred in the Catholic Church, and believes that this has brought about an inversion of the sacred and the secular.

“When the RCC [Roman Catholic Church] lost a sense of the sacred, the secular world, in a desperate need to experience transcendence – made the sacred into something profane. I've noticed this for many years in the gay community,” said Sciambra.

All LifeSite coverage of the 2018 Met Gala can be found here.