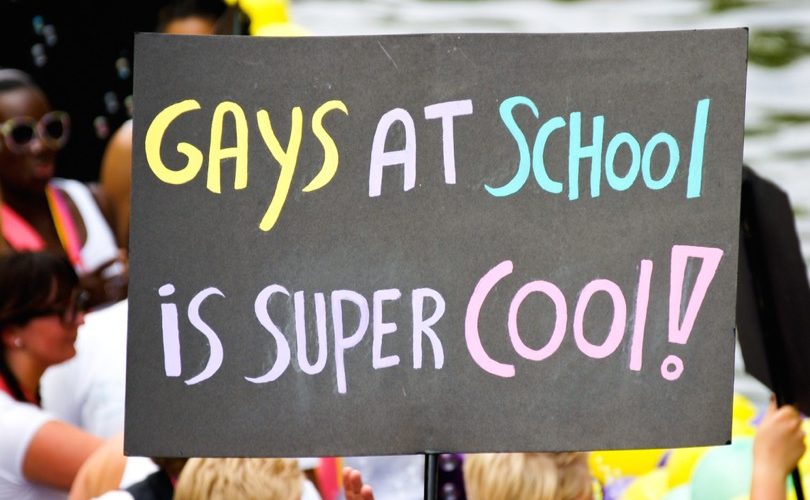 MANITOBA, March 10, 2016 (LifeSiteNews) — When pro-LGBTQ researchers set out to find how many K-12 teachers across Canada support “LGBTQ-inclusive education” using a voluntary polling method, they unsurprisingly found that the majority of participants, including the majority of polled Catholic teachers, strongly support gay “marriage” and agree with promoting LGTBQ issues in schools.

REAL Women of Canada is calling the report “propaganda” because of the questionable method used to collect data.

One of the researchers responded to LifeSiteNews' initial inquiry, but failed to respond to questions about the study's methodology in follow-up communications.

The 179-page report was published in January by the University of Winnipeg in partnership with The Manitoba Teachers’ Society and titled The Every Teacher Project on LGBTQ-inclusive education in Canada’s K-12 schools. The project was primarily funded by taxpayers via the federal government’s Social Sciences and Humanities Research Council of Canada (SSHRCC), as well as homosexual organization Egale Canada. The SSHRCC confirmed to LifeSiteNews that taxpayers contributed $175,000 to the project.

Data for the report was gathered between 2012-13 using online surveys from 3,400 volunteer participants — of an estimated 633,000 K-12 teachers — who were recruited by researchers through direct contact with national, provincial, and territorial teacher organizations, including Catholic ones, from across Canada. Survey participants were told that their participation would make them eligible to have their name entered for an “iPad draw.”

The researchers found that while “81% of educators from Catholic schools supported same-sex marriage,” only 5 percent reported that “homosexuality is contrary to my religious convictions” as a factor that would prevent them from promoting LGBTQ issues in the classroom. As many as 57 percent said they would “feel comfortable” discussing LGBTQ issues with students. When Catholic educators were asked why they did not practice “LGBTQ-inclusive education” in the classroom, the majority cited “insufficient training,” not “religious beliefs.”

When LifeSiteNews contacted lead investigator Dr. Catherine Taylor from the University of Winnipeg and asked if the numbers represent the totality of Catholic educators across the country, or only the ones who voluntarily responded to the survey questions, she admitted that Catholic educator participants were “somewhat underrepresented.”

“As you might have guessed, we did not hear from every teacher in the Catholic School system,” she said, adding, “Racialized teachers were somewhat underrepresented.”

One faithful Catholic teacher told LifeSiteNews under condition of anonymity that she had never heard of the survey. The teacher said that even if she had heard of it, she would likely have chosen to not participate, given that it was on the topic of LGBTQ issues in the classroom, a topic that she said often involves conflict with basic Catholic tenets on sexual morality.

When LifeSiteNews further asked Dr. Taylor how she would answer the charge that the numbers in the report may have been tainted by the fact that teachers were asked to answer a survey involving “LGBTQ” issues and thus the survey may have disproportionately attracted participants who already strongly agree with promoting LGTBQ issues in schools, she never responded.

At a January 15 press conference at the University of Winnipeg where the report was officially released, university president Annette Trimbee stated that the report findings will be used to transform Canadian schools.

“At the heart of the matter is the question of what information schools’ teachers have and what information they need to make sure their spaces are inclusive of everyone. That is what this study has to teach us and with this report, we will hear more of the answers we need to make the kind of policy changes that could prevent a child from feeling unwelcome at school. … Research, like this study, can inform policy that will lead to positive social change,” she said.

The researchers claim their data shows that the majority of educators have bought into the reasoning that making schools “safe” first and foremost means making them “inclusive.”

“Our analysis of survey data found that educators share the perspective that safety and inclusion go hand in hand. Almost three-quarters of survey participants chose ‘Inclusion’ instead of ‘Security’ and ‘Regulation’ in answer to the question, ‘What does school safety mean to you?’ Our analysis attests that Canadian educators understand that the safety of marginalized students depends on their inclusion as fully respected members of the school community,” the report states.

The idea of linking “safe schools” with “inclusion” was pioneered by US homosexual activists in the 1990s to win acceptance for their cause in the education system. “This framing short-circuited their arguments and left them back-pedalling from day one,” said Massachusetts LGBT activist Kevin Jennings. “[N]o one could speak up against our frame and say, ‘Why, yes, I do think [gay] students should kill themselves:’ This allowed us to set the terms for debate.”

Dr. Taylor stated at the same press conference, after acknowledging her fellow researcher and “partner” Dr. Janice Ristock — referring to her as the “greatest achievement of my life” — that the report is the “voice of Canada’s teachers saying, ‘enough already.’”

The report has a number of recommendations for government and school districts to “increase the level of LGBTQ-inclusive practices to match the level of educator approval,” including:

Diane Watts, researcher at REAL Women of Canada, told LifeSiteNews that the results of the report are questionable.

“The report, The Every Teacher Project, cannot measure how many teachers simply do not engage in long questionnaires and opted out. Other teachers may have thought the questionnaire to be overly obsessed with categorizing people and refused to respond,” she said.

“Also, with online surveys, there is no way to determine how many times an individual may have completed the survey. The approach is wide open to abuse. The accepted method is random selection,” she added.

Watts noted how the report found that 16 percent of the educators surveyed identified as LGBTQ, a number that she says backs up the claim that the survey is “disproportionate.”

“Statistics Canada’s Canadian Community Health Survey found that only 1.3% of the population between 18 to 59 years identified as homosexual (lesbian and gay) in 2012, and only 1.1% identified as bisexual. A very high percentage of educators surveyed for the project identified as transgender, 3%, which is higher that all LGB combined, 2% in the general population, according to Statistics Canada 2011 census data,” she said.

Watts also said that looking at the focus group facilitators the researchers used to help them connect with teachers may indicate a bias. For instance, facilitators included Kevin Welbes Godin, Special Project Coordinator for Equity and Inclusion for the Ontario English Catholic Teachers’ Association, and Joan Beecroft, member of Egale’s Education Committee for facilitation in Owen Sound, Ontario.

“Their focus group facilitators are known gay activists which obviously gives rise to questions about objectivity and influence,” Watts said.

Watts concluded that the report should be treated as of no scientific value in forming policy.

“We believe these surveys are simply propaganda tools used for the promotion and acceptance of homosexuality and used to gain access to large numbers of students,” she said.