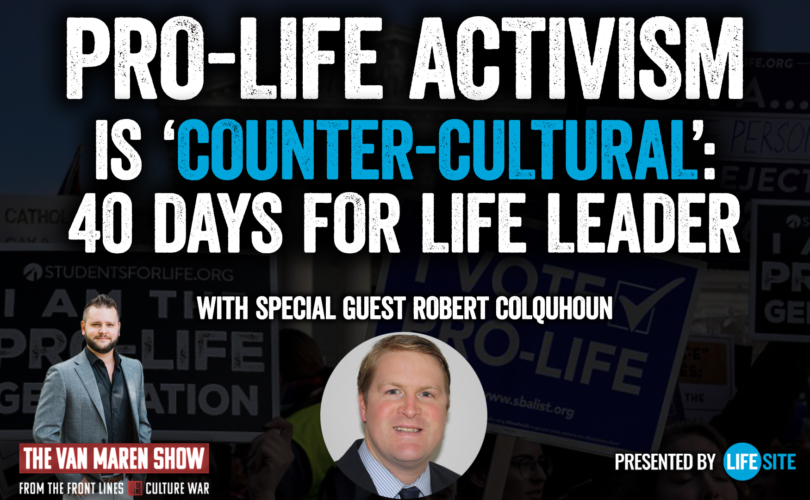 July 7, 2021 (LifeSiteNews) – In the latest episode of The Van Maren Show, Jonathon sits down with Robert Colquhoun, the director of International Campaigns with 40 Days for Life, to discuss Colquhoun’s efforts to bring “God into the pro-life movement” in countries around the world. Colquhoun has traveled to many nations setting up prayer campaigns, vigils, and training sidewalk counselors to end abortion locally and shut down clinics abroad.

Since 2010, Colquhoun has been involved with 40 Days for Life in the United Kingdom, where he lives with his wife and four children. He says that since then they have seen “many babies saved in the U.K. at the very last moment before a woman goes for an abortion.”

However, Colquhoun also points out some of the obstacles faced by the pro-life movement in England, which is why he describes their work as “counter-cultural.” There are “strongly entrenched pro-abortion views” in the liberal country. Over the past year, there has been a legislative effort to push for abortion-at-home pills and to criminalize prayer vigils outside abortion facilities.

He also describes how Prime Minister Boris Johnson – and most of the grovernment – has shown not himself to be “a friend of the pro-life movement.”

Colquhoun does note, however, that he has made some major inroads in a number of foreign countries. He’s traveled to and began 40 Days for Life campaigns and events in places such as Croatia, Russia, Spain, Colombia, Bogota, Kenya, South Africa, Taiwan, and South Korea. He highlights how African countries particularly continue to maintain traditional family values, as many Western nations try to forcefully promote abortion and contraception through Planned Parenthood and Marie Stopes International.

Colquhoun remains encouraged to stay in the fight to save the unborn. He says that “God has shown that this is a battle of hearts and minds. It's about saving lives. It's a ministry where you can save lives every single day.”