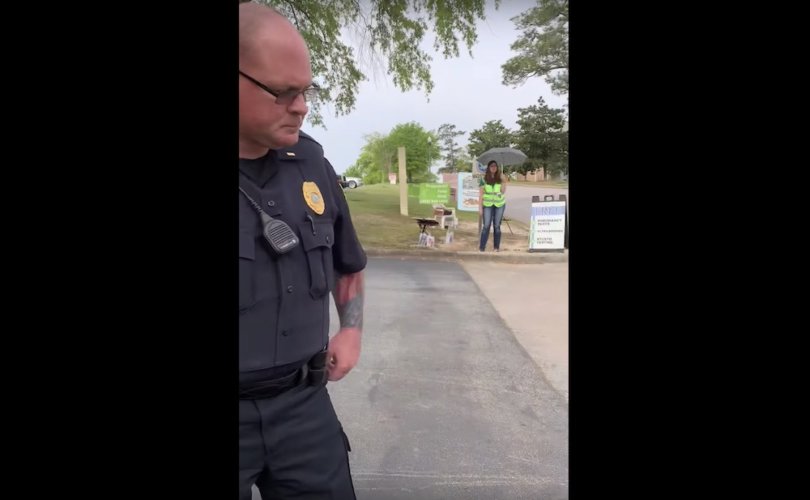 COLUMBIA, South Carolina, April 9, 2020 (LifeSiteNews) – As several localities across the United States invoke the coronavirus panic to attempt to stop pro-lifers from praying, protesting, or counseling outside of abortion facilities, police in Columbia, South Carolina went so far as to issue a citation to a man for allegedly violating a statewide stay-at-home order that had not yet taken effect.

Mark Baumgartner, who heads the evangelical pro-life outreach group A Moment of Hope, was leading a group of protesters outside a Columbia Planned Parenthood facility on Tuesday, FITSNews reported. The participants more than satisfied the 6-foot “social distancing” standard by standing 25 apart from one another on the sidewalk, yet were confronted by police and ordered to leave. The incident was captured on video:

“I don’t want to have to issue y’all a citation,” one of the officers warned. “I really don’t, OK? I respect what y’all are doing, but now is not the time to do it because of what we’re going through. When this is all over, you guys can continue doing it. That’s fine, but right now, it is what it is.”

Baumgartner refused to leave and received a citation that could mean up to $500 and/or up to 30 days in prison, plus a warning that he would be arrested if he returned to the abortion center.

“I was there legally. According to a letter from the City Attorney to Mayor (Stephen) Benjamin, we are exempt from the stay-at-home order because it is a religious activity,” Baumgartner wrote in a Facebook post that includes a copy of the letter. “Yet the city police threatened me with arrest if we didn't leave. Meanwhile, elective abortions went on unhindered while the legitimate medical community lacks adequate PPE” (personal protective equipment).

In the March 26 letter, city attorney Teresa Knox cited a guidance from the office of state Attorney General Alan Wilson clarifying that the COVID-19 state-of-emergency declaration “should be read and applied by officers” with the understanding that, “in case of conflict between the statute and fundamental constitutional liberties, those liberties must prevail.”

Further, Republican Gov. Henry McMaster’s latest stay-at-home order – which exempts “outdoor exercise or recreational activities” – had not taken effect yet at the time of the confrontation.

The Attorney General’s office declined to comment on the case, but McMaster spokesman Brian Symmes told the Post & Courier that the action against the pro-lifers “certainly seems to be politically charged by the city of Columbia leadership. Even worse, this is the kind of selective enforcement that makes people lose faith in government.”

This is only the latest instance of law enforcement shutting down peaceful pro-life assembly, even when it complies with social distancing. Others include David Benham’s Cities4Life in Charlotte, North Carolina; Love Life in Greensboro, North Carolina; Andrew Belanger, Justin Phillips, and Cal Zastrow in Detroit; and Ron Kanopaski in San Francisco. Sidewalk counselors were also threatened with arrest in Milwaukee but ultimately allowed to continue.

Further details on respecting public health rules during pro-life activism, and on pro-lifers’ legal right to stay active during this time, can be found at Pro-Life Action League's website here. Readers can also click here for LifeSiteNews’ live updates on the coronavirus and its impact all over the world.