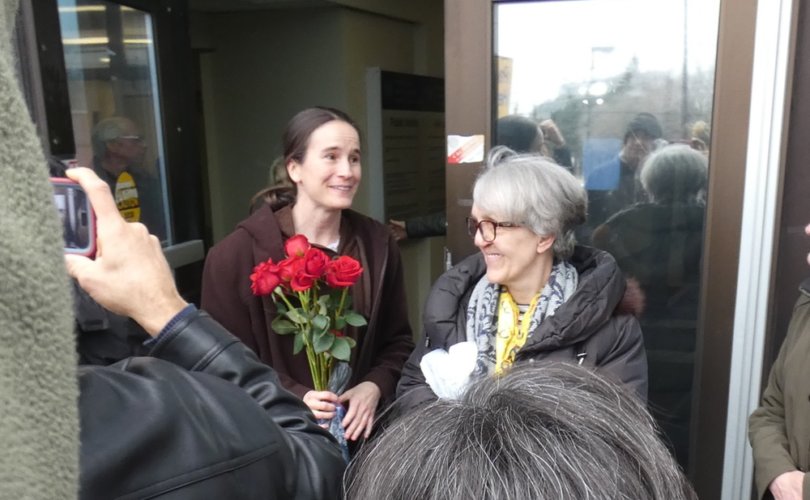 TORONTO, March 8, 2018 (LifeSiteNews) — Pro-life prisoner of conscience Mary Wagner walked free Wednesday after three months in jail even though her trial on charges of mischief and breach of probation isn’t over.

Justice Neil Kozloff signalled he was open to releasing Wagner when it became clear the proceedings would carry over to a third day.

Wagner refuses to sign bail conditions requiring her to stay away from abortion centers, which Kozloff noted when pointing to the difficulty of booking an early court date to finish the trial.

“I’m going to address the elephant in the room,” he told Wagner’s lawyer Peter Boushy and Crown attorney Kasia Batorska.

“I don’t want her kept in custody for the convenience of the Court.”

Boushy suggested Wagner be released without conditions, pointing out she is already under two probation orders forbidding her to go near abortion centers in Ontario, and there is provincial legislation establishing zones outside of abortion facilities.

Kozloff and Batorska both agreed Wagner could go free on the sole condition she keep the peace and be of good behaviour.

Boushy thanked the judge on behalf of Wagner and her 25 or so supporters, who were packed into a courtroom so small several had to stand.

Wagner has pleaded not guilty to one charge of mischief and two of breach of probation. These arose from her December 8, 2017, arrest at the Women’s Care Clinic, located on the 5th floor of a medical building at 960 Lawrence Avenue West.

“I think it’s really significant that today is the feast of Felicity and Perpetua,” a clearly elated Wagner told her supporters outside the courthouse after her release.

“Felicity and Perpetua were martyred in the year 204, with Felicity in her 8th month of pregnancy. So I think that little baby was interceding for us today.”

Julia Haag, a longtime sidewalk counsellor arrested in a Red Rose Rescue in Washington D.C. in December, was one of three Americans, including a Catholic priest, who drove up from Washington to attend the trial.

“I’m really happy and feel blessed to be able to spend some time with her,” said Haag, who goes to trial in June.

“I believe she’s a beautiful role model. If everyone had the passion for children and ending abortion, and if every Catholic prayed and acted with such conviction, [abortion] would be over.”

Much of the trial’s second day was taken up with Miroslav “Mike” Markovic, the owner of the Women’s Care Clinic, testifying on the abortion center’s operations.

Wagner is charged with mischief, which is defined as the interference with the lawful operation of a business, and her lawyer Boushy told the Court an essential ingredient of the case was to prove beyond a reasonable doubt the abortion center was a lawful operation.

Markovic testified he is the director and majority shareholder of the Women’s Care Clinic Limited, a management company incorporated in Ontario in 1996. He is paid by the clinic’s two abortionists, his wife Saira Markovic, a general practitioner, and Rosa Magalios, an obstetrician gynecologist.

Markovic said the Ontario government licensed one Ottawa and four Toronto abortion facilities, one of which has since closed, under the Independent Health Facilities Act in the early nineties so abortion centers could get facility funding from the ministry of health.

The Women’s Care Clinic applied for a license but was turned down because the government thought four Toronto abortion centres was sufficient, Markovic testified.

The ministry has since stopped licensing abortion facilities “because they did not want to provide funding,” he told the Court.

His abortion facility is registered as an “out-of-hospital premise,” a category established in 2010 by the government and the College of Physicians and Surgeons “in order to cover all procedures that are done with anesthesia outside hospitals,” Markovic testified.

When Boushy began intensely quizzing Markovic over the $60 fee the Women’s Care Clinic charges its clients, the judge repeatedly questioned the relevance, finally saying he would “bear with” Boushy no further.

Boushy then asked Markovic to leave the courtroom so he could explain his rationale to the judge, adding sharply that he was trying to defend Wagner, who “is entitled to a fair trial.”

“Mr. Boushy, don’t lecture me on what she is entitled to,” snapped Kozloff, whereupon Boushy shot back that the judge had “interfered with my cross-examination…you have sir, yes, you have.”

He then told the Court he had a Ministry of Health email statement advising him abortion centers are not required to be licensed under the Independent Health Facilities Act.

Boushy asserted the Women’s Care Clinic is governed by the IHFA insofar as it cannot charge illegal fees, and that he was attempting to establish whether the $60 fee was illegal.

When Markovic returned to the courtroom, he testified that the $60 covered uninsured services, and that the abortion facility waived the fee for women who couldn’t pay. But he couldn’t say for what percentage of patients the fee was waived.

When pressed by Boushy and Kozloff to specify the uninsured services, Markovic listed “the work that the nurses do,” a hotline, “birth control counselling”, “free birth control”, letters for employers and pre-abortion counselling.

When Boushy questioned him about pre-abortion counselling, Markovic insisted it was “completely separate from the abortion procedure” and done not by the abortionists but by nurses.

Patients had occasionally complained to the ministry about the fee and the ministry had ruled “it was okay,” he told the Court.

The Crown asked Markovic to submit copies of the letters between his abortion facility and the Ministry of Health “with respect to fees,” as well as a copy of the Women Care Clinic’s incorporation papers.