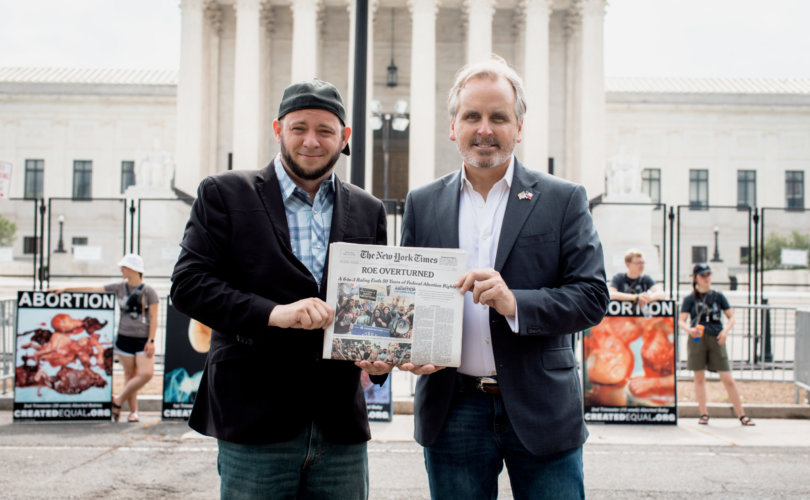 (LifeSiteNews) – One of the most influential pro-life activists in the U.S. is taking a defamation lawsuit triggered by his calling abortion “murder” to the Texas Supreme Court, now with fresh optimism brought on by the U.S. Supreme Court’s reversal of Roe v. Wade.

Mark Lee Dickson, director of Right to Life for East Texas and founder of the growing Sanctuary Cities for the Unborn Initiative, was accused by abortion funds of defamation after he called them “criminal” groups that assist in the crime of “murder.”

The legal battle began when Dickson’s Sanctuary Cities for the Unborn Initiative, now encompassing 44 cities in Texas and a few cities outside the state, included ordinances that declared abortion providers and fund groups to be “criminal organizations.”

While an initial lawsuit taking issue with this language was dropped after the cities removed their ordinances’ references to criminality, three abortion funds have pushed forward with new lawsuits against Dickson for what they consider to be “defamatory” comments.

The Lilith Fund accused Dickson of “paint[ing] abortion rights organizations … as criminals,” citing his statements in City Council meetings accusing pro-abortion groups of “aiding and abetting literal murder,” according to the lawsuit. Dickson is also being sued by the Texas Equal Access Fund and the Afiya Center.

The Amarillo-based court concluded “as a matter of law” that Dickson’s comments were “non-defamatory opinion,” noting that even the Lilith Fund acknowledged that “generally calling abortion ‘murder’ alone is not defamatory.”

Dickson recalled to LifeSiteNews how at one point during the Amarillo hearings, interestingly, the Lilith Fund attorney clarified to the judge that their lawsuit did not take issue with a reference by Dickson to Lilith, the mythological figure for which the group is named, as “a demon that preys on women and children.”

“I thought that was kind of funny because Lilith is a demon that preys on women and children,” Dickson told LifeSiteNews, adding that he sees the fund as just that. He pointed to his 2019 comment, “Perhaps they have a desire to live up to their name.”

Dickson pointed to the opinion of the Amarillo-based court that his statements were “protected speech” as fundamental to his case. In that opinion, the court highlighted his argument that “‘Abortion is Freedom’ in the same way that a wife killing her husband would be freedom — Abortion is Murder.”

Dickson told LifeSiteNews, “We would not be in this fight if abortion wasn’t murder. If abortion was like having an appendix removed or having a tooth extraction, then we wouldn’t be making the arguments we’re making.”

“We’re making the arguments we’re making because we really believe that this is a human life that is having their arms and legs ripped apart, that this human life is being taken because of a side that wants to profit off of the murder of innocent children,” Dickson said.

He honed in on the crux of the case as a “freedom of speech issue,” telling LifeSiteNews, “Those who are engaged in this battle, whether it be behind the pulpit or at Republican club meetings or in schools … they need to be able to speak with full confidence that they’re not going be able to sued for defamation for saying abortion is murder.”

He continued, “And right now the way this stands is that when you live in East Texas, saying abortion is murder could result in you getting sued for defamation. But if you say it in West Texas, well, you’re good. We don’t only need freedom of speech in West Texas … We need it all the way across the board. And so that’s why this is so important. It’s not just about abortion. If they can sue us over defamation, they can sue us for anything.”

Dickson also made the case that, even before Roe was reversed by the Supreme Court’s Dobbs opinion on Friday, pre-Roe Texas statutes on the illegality of abortion were still part of state law, meaning that his statements are not only protected free speech but are legally true.

“The legislature is the only body of government that has the power to repeal the laws that it enacts,” Dickson told LifeSiteNews. “And so the fact that the legislature had never repealed these laws — that still makes them the laws of Texas. The courts don’t have the ability to erase laws. Until that law is repealed, it’s on the books.”

Commenting on the effect he expects Roe’s undoing will have on his case, Dickson told LifeSiteNews, “This only solidifies our position that much more. And we believe that this is going to help pave the way for a victory in this case.”