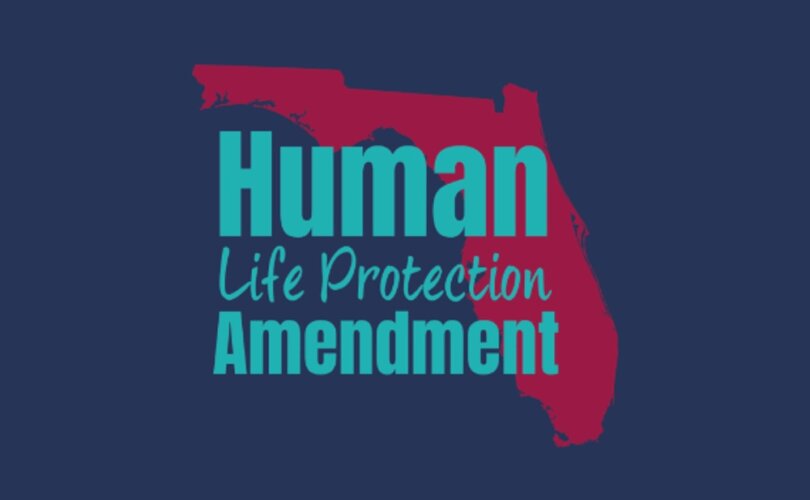 (LifeSiteNews) — Pro-life Floridians are collecting signatures for a ballot initiative to amend the Sunshine State’s Constitution to explicitly recognize “The right to life of the preborn individual is God-given, thus unalienable and recognized accordingly. Therefore, it shall not be infringed at any stage of development.”

“The idea is to amend the Florida state constitution to protect the unborn as persons, thereby prohibiting abortion from conception,” Cyrille Velasco, a volunteer from Protect Human Life Florida, told LifeSiteNews via email. “By February 2024, across the state 891,589 signatures are needed to get the proposed amendment on the ballot that November, then 60% of voters must approve the proposition; it would then go into effect immediately.”

Unlike its peer red states, Florida has only banned abortions after 15 weeks. Most babies are aborted during the first trimester of pregnancy.

According to the Charlotte Lozier Institute (CLI), “Florida’s abortion rate remains well above the national rate” and in 2021 was “up six percent from 2020.”

Florida “has become a haven for abortion,” falling third in line for the highest number of abortions performed in 2021, behind only California and New York, Mark Minck, State Chairman of Protect Human Life Florida, told LifeSiteNews. And “the number of reported abortions in Florida has been steadily rising since 2017,” he said.

“Now that Roe v. Wade has been overturned, Florida is the state that allows abortions later than anywhere else in the South.”

But “over the past four years, Florida voters have signaled an important shift,” said Minck. “Voters aligned with more conservative values have taken the majority here for the first time in the state’s history.”

“If Florida voters are allowed to decide on this issue, we believe they will choose to amend the state constitution to recognize the right to life of the preborn,” he said. “That would put an end to abortion here. And it could have nationwide consequences.”

Popular Republican Gov. Ron DeSantis was re-elected by more than a million votes last week, whereas in 2018 won by fewer than 33,000 votes.

“Voters in Florida resoundingly have signaled their approval for the more conservative direction our state is taking,” Minck explained. “And the whole country is watching.”

‘We need boulders, not pebbles’

It also does not allow babies conceived in rape or incest to be aborted “since those children also deserve life,” Velasco explained.

Velasco said that while Protect Human Life Florida is doing their best to collect the necessary signatures, there is still much that must be done.

“While our grassroots efforts contribute to the cause, we need some kind of leverage point to gather many more petitions,” she said. “We need boulders, not pebbles.”

In order to attain this “leverage,” Protect Human Life Florida is hopeful that their initiative will be fully supported by the Florida Conference of Catholic Bishops.

“Because our mission so clearly aligns with that of the Catholic Church, we would expect the bishops to fully endorse our initiative,” said Minck. “We also would expect them to enlist the help of an army of pro-life Catholics across the state to help us reach our goal of submitting almost 900,000 signed petitions and earning a spot on the 2024 ballot.”

“The passion of life-loving Catholics to protect the preborn has been an inspiration to our team, and we look forward to harnessing the power of the Catholic Church to stop the killing of the preborn in Florida,” he added.

“There’s no time to waste. By locking arms now, we can halt this tragedy in Florida forever.”

“We’re at a historic time in the fight for the rights of the preborn,” concluded Minck. “In the last year, immense progress has been made in our country to protect innocent human life. But here in Florida, we still have work to do.”

“Bringing this choice to Florida voters presents an opportunity to send a message to the world that protecting human life does not conflict with the passion to protect freedom,” he continued. “We’ll show it’s a critical part of defending freedom – freedom to live!”