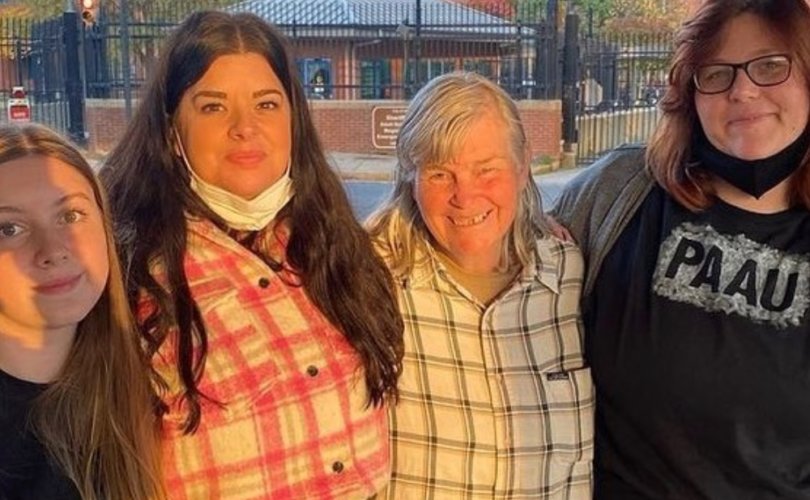 (LifeSiteNews) – Six pro-life activists were sentenced to jail this morning in Virginia.

Pro-life heroine Joan Andrews and her five companions had taken part in a “Pink Rose Rescue” in Alexandria, VA, in November 2021. A Pink Rose Rescue is an initiative during which pro-lifers enter abortion clinics, knowingly risking arrest, to persuade women who are preparing to have their babies killed to choose life instead. The women are given a pink or red rose, typically with information about abortion or pregnancy resource centers.

The following activists each received a custodial sentence:

Many of the activists sentenced this morning have previously found themselves in conflict with civil authorities over their stand against abortion.

Bukovinac has taken part in numerous rescues, and was involved in the retrieval of a box containing the remains of aborted babies outside the Washington, D.C. Surgi-Center earlier this year. Her sidewalk support for the unborn has also resulted in legal disputes.

Lauren Handy has taken part in other rescues that have led to her arrest. In 2020, Handy organized a “traditional rescue” in Washington, D.C., for which she was arrested in April 2022.

Joan Andrews Bell’s involvement in pro-life activism has spanned decades. In recent years, she has participated in Red Rose Rescues, including one in Alexandria in 2017. Three years later, she took part in a rescue in New Jersey in which she was arrested.

The PAAU press release stated that other activists within the organization will “organize vigils outside the jail demanding the release of these brave and heroic Rescuers”. The vigils are scheduled to occur outside the Alexandria Detention Center every night at 5pm.

Earlier today, the Citizens for a Pro-Life Society put out a prayer request for those who stood on trial for defending the rights of the unborn. The organization also asked for prayers for Fr. Fidelis Moscinski, Will Goodman, and Matthew Connolly, who are scheduled to be sentenced on July 20 for a rescue in New York.

Jean Mondoro is an editorial intern for LifeSiteNews.