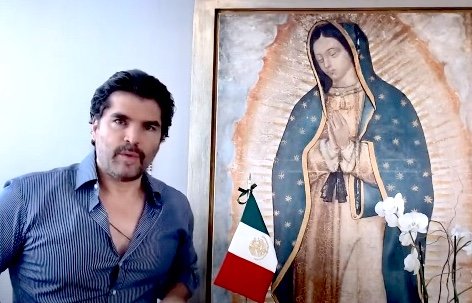 WASHINGTON, D.C., July 15, 2020 (LifeSiteNews) ― A pro-life Mexican movie star has given an icon of Our Lady of Guadalupe to President Donald Trump.

Eduardo Verástegui, star of the 2006 film Bella, was at the White House last week with other leaders in the Spanish-speaking community for the signing of the Executive Order on the Hispanic Prosperity Initiative.

Verástegui, who is a practicing Catholic, told EWTN White House correspondent Owen Jensen that he had brought Trump a meaningful gift.

“I brought the president a beautiful image of Our Lady of Guadalupe because not only is she the icon of the pro-life movement, but at the same time she is the symbol of unity and racial healing,” Verástegui said.

“I just want to remind everyone who supports, and is, pro-life to pray for a pro-life leader.”

Verástegui added that Trump is the “best pro-life president ever” in American history.

During the July 9 visit to the White House, Verástegui thanked President Trump for his pro-life leadership.

“Thank you for your leadership in defending the unborn. As you know, Mexicans — the majority of Mexicans — support the right to life. And thank you for defending life in America and in Latin America. Without a doubt, you are the best, the greatest pro-life President in the history of the United States. Thank you for that,” he said.

On January 24, 2020, President Trump became the first American president to attend the March for Life in Washington D.C.

According to the July 9 Executive Order, the Prosperity Initiative aims at giving greater “educational and economic opportunities” to Hispanic Americans.

“The success of Hispanic Americans is integral to the economic future of (the USA),” the Order reads.

“As more than 60 million Hispanics live in the United States today, Hispanics are the largest minority group in the country,” it continues

“Hispanics are also the nation’s youngest major racial or ethnic group. Generations of Hispanics constituting different backgrounds and cultures have contributed to building a strong and prosperous America. Their collective contributions continue a legacy of inspiration that is a cherished part of the American experience.”

Verástegui, 46, was born in Xicoténcatl, Mexico, and raised in a devout Catholic home. After a short stint in law school, he moved to Mexico City to pursue a career in the arts. He began as a model, was recruited as a singer for a successful boy band, and then became a major television star. His biggest dream, however, was to become a Hollywood star. A chance meeting with a casting manager for 20th Century Fox studios led to a role as a Spanish-speaker in a Hollywood film and to his move to Los Angeles, where he began to learn English.

Verástegui had long since abandoned the practice of his faith, but his English teacher gently but persistently encouraged him to come back. In a 2009 interview with L’Osservatore Romano, Verástegui described how his teacher asked him searching questions about his faith, his career, how he was using his talents, and what he would do to combat Hollywood stereotypes about Latinos:

I tried to avoid answering them, but for six months she patiently and lovingly persisted and eventually she asked me directly, ‘Do you really love God, Eduardo? Then why do you offend him in the way you live your life?’ After this, I broke down, and I cried like a baby for hours. I went to confession, and I promised God that I would commit my life to him and I would never again accept roles which would compromise my Catholic faith or offend my family or my Latino culture.

Determined on this course, Verástegui began his own film production company, Metanoia Films. Its first film, a story about a cook who asks a pregnant colleague not to have an abortion, was called Bella, which won the People’s Choice Award at the Toronto Film Festival in 2006. It also won a Smithsonian Latino Center award for its positive contribution to the culture. Best of all, it saved the lives of hundreds of unborn children.

Since Bella was filmed, Verástegui has become a leading Hispanic voice in the worldwide pro-life movement.