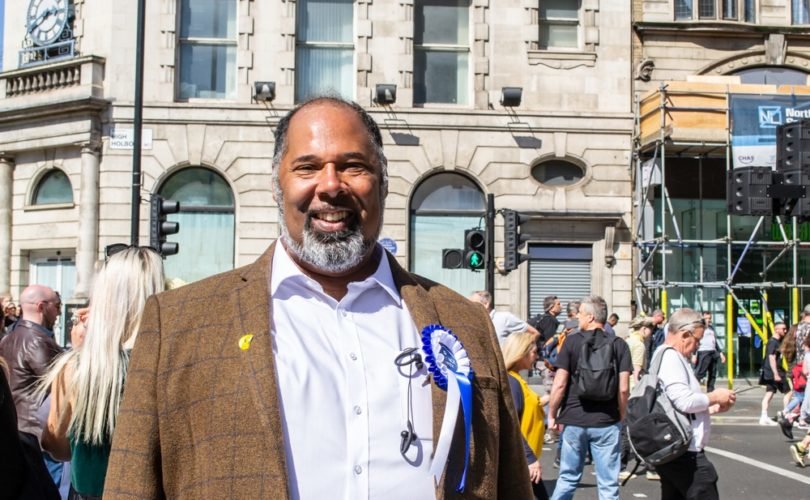 David Kurten - a London Mayor Candidate for The Heritage Party - at a Unite For Freedom anti-lockdown protestJessicaGirvan / Shutterstock.com

LONDON, U.K., May 6, 2021 (LifeSiteNews) — On the very day of the London mayoral elections in the U.K., Facebook imposed a 7 day ban on London Mayor candidate David Kurten, for his challenging of the global narrative and his opposition to COVID-19 lockdowns and vaccine passports.

Kurten, the founder and leader of the pro-life and pro-family Heritage Party is a member of the London Assembly and a mayoral candidate for the mayoral and assembly elections, taking place May 6, 2021.

However, on the morning of the elections, Kurten was served with a week-long ban by social media giant, Facebook. Flagging a total of five posts dating back to October 2020 posted on Kurten’s individual page, as well as the Heritage Party account, Facebook said that Kurten’s posts “didn’t follow our Community Standards.”

Commenting on the matter to LifeSiteNews, Kurten noted that earlier today he had put up two posts on Facebook: one which explained how the developers of the COVID-19 injections have no liability for the drugs, while the second expressed his, and the Heritage Party’s, firm opposition to lockdowns and vaccine passports.

Noting the calculated timing of the ban, Kurten took to Twitter and described the ban as “an outrage and an attack on free speech and democracy.”

I have been given a 7 day ban from posting on Facebook on the day of the London Mayor and Assembly Elections. This is an outrage and an attack on free speech and democracy. pic.twitter.com/Kr6g7Wi931

This is not the first time that Kurten has faced Big Tech censorship. A few weeks ago, he was served with a 7 day ban from Google’s video platform YouTube, for “disagreeing with the WHO” [World Health Organization].

In both his online presence, and on the campaign trail, Kurten has made no secret about his pro-life, pro-family and anti-lockdown views. He has repeatedly raised awareness of the hastily developed COVID-19 injections, and encouraged his followers to reject the mainstream media in favor of smaller, independent outlets that challenge the global narrative.

In fact, the manifesto of the Heritage Party expressly rejects the modern notions about “queer theory or gender fluidity,” stating that “is a scientific fact that there are two sexes: male and female, which are determined by anatomy and chromosomes.”

Kurten’s party also promotes the use of wholesome educational materials, promising to block texts or lessons which “encourage early sexual activity in children before they reach the age of consent, or inappropriate materials detailing non-reproductive sexual acts.”

He is unashamedly pro-life, noting that “in every abortion a human life is ended,” and promising to “completely defund UK government support for abortion programs outside the UK.”

As for the government’s COVID-19 policies, the Heritage Party and Kurten are similarly opposed, holding positions which defy the global and social media narrative on lockdowns, masks and the mRNA injections.

“The draconian coronavirus laws and regulations implemented for a disease no worse than a bad flu season are an egregious attack on our civil liberties. The Heritage Party opposes arbitrary restrictions on citizens and businesses, and will dismantle the legal framework which gives the government the powers to erode our liberty in this manner again.”

One of his opponents on May 6 is the incumbent Labour mayor, Sadiq Kahn. Since 2016, Sadiq Kahn has served as Mayor of London, and has been a strong proponent of strict mask policies, lockdowns, LGBT ideology and abortion.

He has also firmly defended the implementing of so called “buffer-zones” around abortion centers.

In his own manifesto for today’s election, Kahn repeatedly affirmed his support of the LGBT movement: “I stand firm in my solidarity with London’s LGBTQ+ community. I’ll continue to provide support to Pride, and to use my influence to strengthen Pride’s links with those groups and communities that gave birth to the movement.”

In contrast, Kurten regularly posts on social media, demonstrating his defence of traditional, family values, and protesting against the liberalisation of society: “Lockdowns are unnecessary and disproportionate. There are two sexes – male and female. Mass, rapid, illegal immigration is bad. Marriage is a man and a woman. There is no climate emergency. Unborn children are children. All lives matter.”