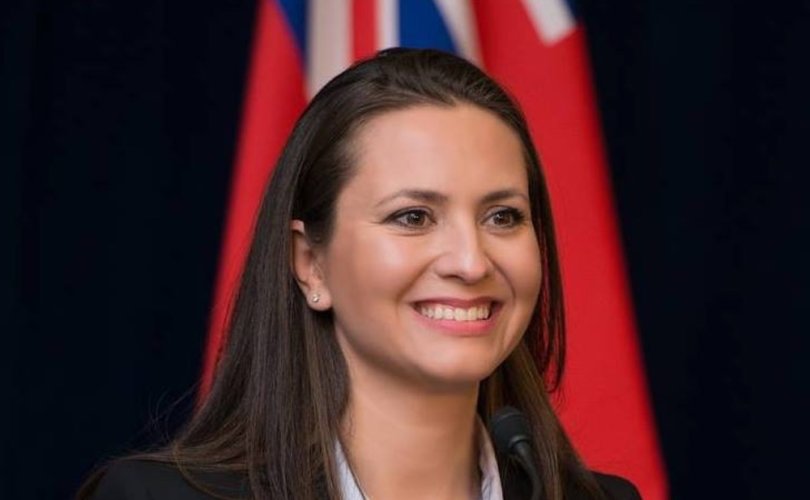 The pro-life mother of four captured 55 percent of the first ballot vote to best rivals Natalia Kusendova, Qadeer Shah and Rosemer Enverga and win the right to represent the riding west of Toronto in Ontario’s June 7 election.

“The last four weeks have been very intense, and my campaign team, which included over 200 hundred volunteers, worked around the clock to ensure the victory,” Granic Allen said in an email thanking supporters.

“I commit to you, to always be a strong voice to advocate for the children, the family, and for the taxpayer.”

I congratulate my friend, @TGranicAllen, on her nomination as the Ontario PC Candidate for Mississauga Centre. Together, we will defeat Kathleen Wynne and bring change for the people! #onpoli #PCPO

Campaign Life Coalition recruited 223 memberships for her nomination run, he told LifeSiteNews. “Everyone worked unbelievably hard, and we’re so grateful to those pro-lifers who engaged so willingly.”

Now that will to engage has to shift to beating the Kathleen Wynne Liberals in June, Gunnarson added.

“We’re looking forward to a Progressive Conservative majority of pro-life, pro-family MPPs under Doug Ford, who will repeal Wynne’s disgusting sex-ed curriculum, and restore free speech and association to all Ontarians,” he told LifeSiteNews.

And she emerged not as the winner but as acknowledged kingmaker in the contest, with 80 percent of her supporters backing Ford on the second ballot. Granic Allen was only candidate to stand beside Ford during his acceptance speech at the March 10 convention.

On a leave of absence as president of parents’ rights group Parents As First Educators (PAFE), Granic Allen has promised to repeal and replace the radical sex-ed curriculum the Wynne Liberals rolled out in 2015.

It’s thought her candidacy was crucial to Ford making the same vow during the leadership race. Ford also criticized Ontario’s age-of-consent laws that allow minors to have an abortion without their parents’ knowledge or consent, and the Liberal bubble zone law banning pro-life witness outside abortion centers.

The unusual move sparked protests, including one from aspiring London West candidate Jake Skinner, who tweeted he was “in a state of shock” and that “nominations should be earned, not bestowed.”

Ford defended himself Monday, citing lack of time and the “mess” left by former leader Patrick Brown, who resigned in January over allegations of sexual misconduct he has denied.

“Let me emphasize: I hate, hate appointing people and unfortunately, the mess that we were handed to us from the previous leadership, was quite the disaster to be frank with you,” he told reporters at a campaign stop in Caledon, as quoted in the Toronto Star.

The PC Party ran nominations in 17 of the 28 ridings that were without candidates when he was elected leader, Ford said. “If we continue on with the other 11, it would have taken us right into almost election day.”

“We support the grassroots process of nominations. But we also see Ford had little choice, given the short timeline. The critical goal is to defeat the Liberals. Now we have to get out and campaign for pro-family, pro-life candidates,” he told LifeSiteNews.

“But we congratulate Christine Mitas and Andrew Lawton, and we ask pro-life, pro-family voters in those ridings to please if they can help out with their campaigns,” he added. “We don’t have much time.”

With Granic Allen’s nomination secured, all former leadership contenders are vying for seats, with Caroline Mulroney running in York-Simcoe, Christine Elliott in Newmarket. Ford is running in Etobicoke North.