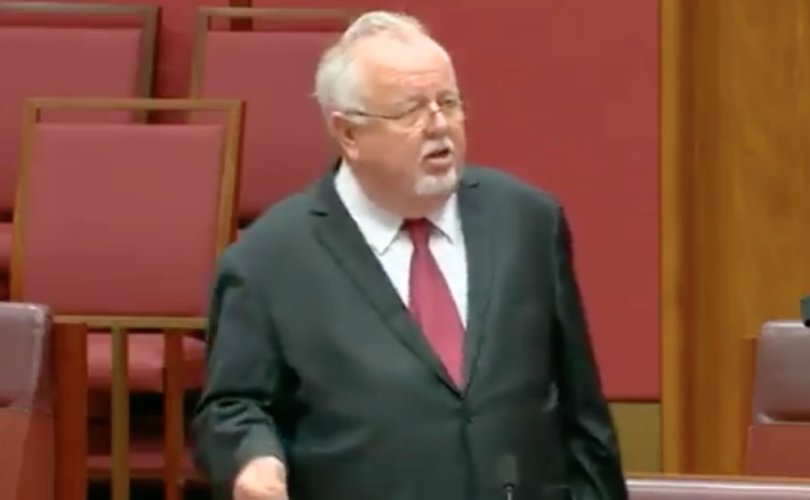 CANBERRA, Australia, November 15, 2018 (LifeSiteNews) – A pro-life member of the Australian Parliament took an unusual approach to defending himself against a common pro-abortion argument this week: “coming out” as a woman so he’d be allowed to have an opinion in a heated exchange.

The Australian state of Queensland established 150-meter buffer zones around abortion facilities last month, along with legalizing abortion up to 22 weeks.

The motion failed, but not before Green Party senator Larissa Waters declared that “Senator O'Sullivan needs to get his hands and his rosaries off my ovaries and those of the 10,000 Queensland women who have an abortion each year,” claiming he couldn’t possibly understand the perspective of women who seek abortions.

She eventually withdrew the remark about O’Sullivan’s faith, but his response is what captured the most attention.

“We can't open our traps, you cannot say the word abortion without being attacked by this mob of almost — I'd say grubs if I didn't think you were gonna make me withdraw it, Mr. Acting Deputy President, but it's out there now,” O'Sullivan fired back Wednesday, BuzzFeed reports.

“These people come and attack me for my religious basis the other day, using words like rosary beads, because I had the audacity to raise issues around late-term abortions where babies that are only minutes away from getting a smack on the arse and a name are being aborted under the policies of the Australian Greens,” he lamented.

Here's the video of Nationals senator Barry O'Sullivan saying he is declaring his gender “to be a woman” so the left-wing people can no longer “attack” him over his anti-abortion views. pic.twitter.com/YzbOCWp0YC

“So I will not stand silent, I will not stand mute while these people try to continue to marginalize policies and ideas that we want to discuss for this nation, that I think are largely supported still by the majority of the nation,” he continued. “There’s no question about that. They are an ever-increasing silent majority because they’re not game to speak. I’ve had it in here.”

“I’ve moved sensible motions here, reflecting the views of so many people in our society, only to have formality denied,” O’Sullivan went on, gesturing to a response by Justice Party leader Derryn Nigel Hinch. “No, well you’ve been part of it Senator Hinch.”

“I’m going to declare my gender today as I can to be a woman, and then you’ll no longer be able to attack me,” the 61-year-old, goateed lawmaker declared. Abortion defenders regularly claim to speak for women and berate pro-life men’s participation in the abortion debate, despite the fact that polling data doesn’t show men and women as having consistently or significantly different views on the subject.

Despite the obviously facetious nature of O’Sullivan’s “coming out,” Pedestrian notes that people have edited his Wikipedia page multiple times to swap “he” and “him” for “she” and “her.” As of the time of this writing, the page is back to normal.

Abortion laws vary among Australia’s states and territories, with abortion for any reason offered as late as 24 weeks in Victoria, though most jurisdictions limit it to some sort of ostensibly-medical purpose.