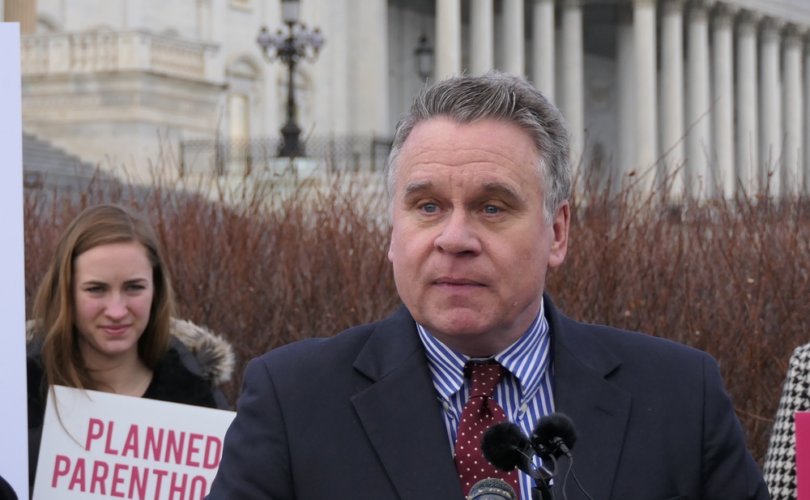 WASHINGTON, D.C., January 19, 2018 (LifeSiteNews) — Well-known pro-life congressman Chris Smith was interrupted twice by massive spontaneous cheers from the crowd of pro-life advocates that stretched like a sea down the Washington Mall at Friday’s March for Life rally.

One roar went up when Smith reported Congress had passed that very morning “by an overwhelming majority” a bill to protect babies born alive during botched abortions.

President Donald Trump has promised to sign the bill when it reaches his desk.

The second cheer burst out when the Catholic Republican representative for New Jersey said he believed prayer and fasting work.

“Because we love, because we pray, because we fast — because I believe that prayer coupled with fasting is highly efficacious —” said Smith, at which point the hundreds of thousands listeners interrupted with cheers.

“ — we will win, babies will be protected,” he finished.

This year’s March marks 45 years since the U.S. Supreme Court struck down abortion laws on January 22, 1973 with its Roe v Wade ruling, and ushered in abortion on demand.

In the ensuing years, an estimated 60 million babies have been killed in the womb and Planned Parenthood has built a seemingly unassailable abortion empire across the nation.

But the message underscoring this year’s March for Life was that this is due to change, with the day of the march marked by two pro-life wins.

Smith, chairman of the congressional pro-life caucus, reported on the benefits of the Born-Alive Abortion Survivors Protection Act passed that morning.

The bill “ensures that the cover-up that goes on each and every day in abortion clinics — when personnel look the other way when a child is actually born and then left to die due to exposure or to an actual killing due to strangulation — that they will now be compelled under penalty of law to report that so that those who commit these crimes can be prosecuted,” the congressman said, to thunderous, sustained cheer.

In another victory, Trump’s health department announced it was rescinding the Obama administration warning to states that they couldn’t deny Planned Parenthood clinics Medicaid funding on the grounds they provide abortion.

And in an historic first, Republican President Trump addressed the March by live-stream video from the White House Rose Garden.

Trump, who was inaugurated a year ago Saturday, warmly praised the efforts of the pro-life movement, outlined the pro-life gains of his administration, and assured marchers of his support.

“Under my administration, we will always defend the very first right in the Declaration of Independence, and that is the right to life,” Trump said.

Vice President Mike Pence did much the same in his remarks from the Rose Garden.

“I believe with all of my heart, with your continued dedication and compassion, with pro-life majorities in the Congress, with President Donald Trump in this White House and with God’s help, we will restore the sanctity of life to the center of American law.”

But Smith exhorted the marchers not to flag in the fight.

“Everyone here today is part of the greatest human rights struggle on the face of the earth. It is the only human rights abuse that the abortionists dare call a human right, it is Orwellian, and yet it happens here and all over the world,” he said.

“I know I’m speaking to the choir, but we need to double down on our prayer for healing,” Smith concluded.

“We need to increase our fasting, and we need to ask God for wisdom for healing, so that we will do our duty to protect the weakest and most vulnerable.”

And in keeping with the March’s theme “Love Saves Lives,” Smith praised pro-life outreach to post-abortive women and their courageous witness.

“This movement has reached out to protect those women who have had abortions to love them, to care for them,” he said.

The Silent No More women “are the new face of the pro-life movement,” Smith said.