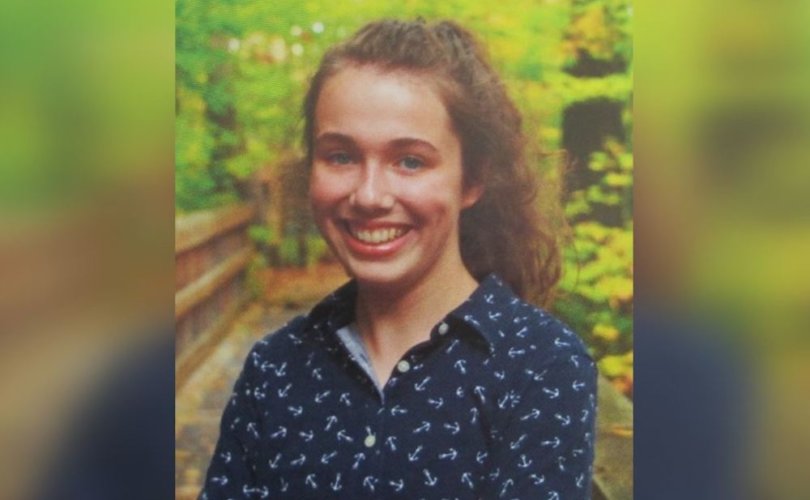 QUEBEC (LifeSiteNews) – As the Catholic heritage of Quebec quickly becomes forgotten and buried, one brave young woman from the province has set out to restore the culture of faith, family, and life in the region.

Geneviève De Vriendt, a 16-year-old girl with a passion for life and faith, is a member of Quebec’s Christian pro-life group Campagne Québec-vie, whose mission it is “to establish a Christian society that protects faith, family and life, from conception to natural death.”

To this end, De Vriendt told LifeSiteNews that she has undertaken to create a “permanent faith, life and family office in Quebec City,” complete with the staff and materials necessary to promote the cause throughout the province.

“Our plan is to promote a return to Faith and Life for Quebec, starting in its capital,” she added.

Campagne Québec-vie President Georges Buscemi recently interviewed with Dr. Thomas Ward of the John Paul II Academy for Human Life and Family. Buscemi explained in the interview that Quebec once had a unique place in North American history as a “microcosm of Christendom in a sea of Protestantism.”

“Men and women religious ran hospitals and schools. The overwhelming majority of the population regularly attended mass. Large families of 8, 9, 12 children … were not at all rare,” Buscemi said.

However, from the early 1960s, Catholic education took a huge blow from the incoming Liberal government, which stripped the school system from the Church, completely secularizing the system, Buscemi explained. “Meanwhile, the media-fuelled zeitgeist was dictating that ‘Quebec was behind’ economically, due to its Catholic/Classical style of education. Quebecers were to meet ‘the needs of today’ by becoming more liberal and economically astute.”

But the damage inflicted “by the secularization of the educational system could only be rivalled by that of the health care system,” Buscemi added. “Church-run hospitals filled with habited nuns were quickly replaced by state-run hospitals. These quickly began permitting sterilizations and giving out contraception. The state-run health system also rapidly began creating abortion centres.”

The consequences of this societal shift have devastated religion and family values in Quebec, where now “regular Sunday attendance at mass hovers at approximately 1%, the birth rate of in the province is well below the replacement rate, and abortions number at about 25,000 per year, probably higher if we could accurately count the chemical ones.”

Consequently, Buscemi emphasized that, for Catholics, it is crucial “to strengthen their home-life and immediate networks, and for the remaining, truly Catholic institutions (pro-life groups, parent groups, etc.), however small, to tighten, not loosen, their links to Christ and His Church, its authentic teachings and immemorial tradition.”

“Only people and institutions intimately related to the Lord will offer any kind of succour and asylum to those escaping moral and societal collapse,” he concluded.

To fight the encroachment of the culture of death and restore Quebec to its core Christian values, De Vriendt has set up a crowdfunding campaign through LifeSiteNews’ LifeFunder platform, allowing donors to support the work of life and faith in Quebec and to help it grow by donating a cash gift.

De Vriendt’s LifeFunder campaign page notes that, where once Quebec was “an ambassador of a culture of Life and family,” it has now become “the epicentre of the Culture of death in Canada.”

“Both euthanasia and abortion were legalized in Canada due to pressure coming from Quebec. Our most pro-abortion prime ministers, Pierre Elliot Trudeau, who legalized abortion in 1969, and his son Justin, who zealously promotes abortion, euthanasia and LGBT causes both at home and abroad, were born and raised in this province,” the statement reads.

Quebec City itself has now lost its Catholic character: “LGBT rainbow sidewalks mar the downtown core, and hardly 1% of the population attends mass weekly. How can a nation return to Christianity when its capital is dying? The birthplace of the Faith in North America has become a graveyard.”

However, “by defending the lives of the unborn, by defending the right to life, by fighting for the Faith and moral standards, we will be able to prevent Quebec’s capital from slowly dying out and dragging the rest of the province—and country—with it,” De Vriendt said.

“Thanks to your donations, we will be able to provide funding for the necessary material and staffing we need to establish a permanent faith, life, and family office in Quebec and organize events such as LifeChain, 40 Days for Life, even a 2022 March for Life in Quebec City,” the pro-life campaigner added, “but we need your help to make this happen.”