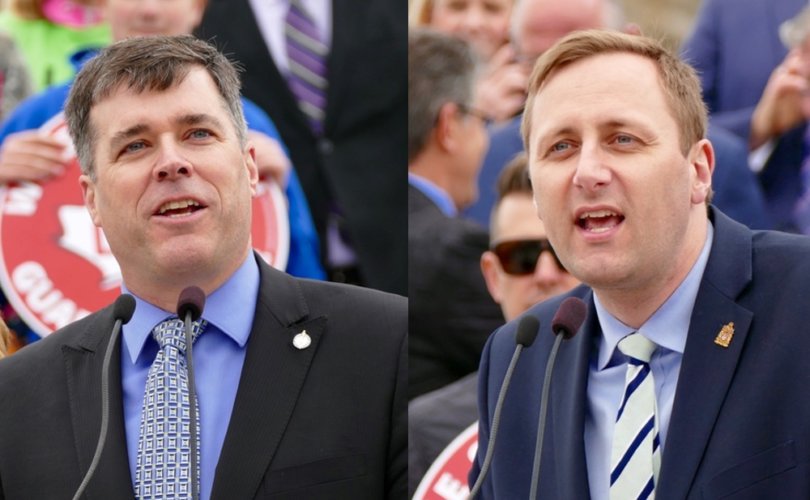 Pierre Lemieux and Brad Trost at the National March for Life, May 11, 2017. Pete Baklinski / LifeSiteNews

OTTAWA, May 15, 2017 (LifeSiteNews) — The Conservative Party of Canada’s leadership race will be over in two weeks and the critical contest loomed large over this year’s March for Life.

Conservative members are voting for their new leader on a ranked ballot that allows 10 choices. The results will be announced at the party’s Toronto convention on May 27.

The race is seen as crucially important for pro-life advocates because the other two mainstream parties, the ruling Liberals and the New Democrats, are officially pro-abortion.

Prime Minister Justin Trudeau, as Liberal leader, in 2014 barred anyone with pro-life convictions from running as a candidate in the Liberal Party. The national New Democratic Party has long done the same.

Thus it was no surprise that all MPs and senators who spoke at the March for Life were Conservative, and that many emphasized the importance of the leadership race.

“I’ve been coming out here for 12 years,” the MP for Saskatoon-University and father of a two-year-old daughter told the crowd.

“I want you to remember three things today, why we are here,” Trost, a Baptist Mennonite, said in his brief address.

“We often use the words from Corinthians about faith, hope, and love at weddings, but that verse applies to us here today, too, ” he said.

“And finally, we are here for the greatest of these three things, for love, because we love those who cannot speak for themselves,” added Trost.

“So remember that the reason you are here to celebrate life is faith, hope, love …  the greatest of these is love,” he said. “Thank you and God bless.”

Contender Lemieux, 54, who lost his Ottawa-area seat in the Liberal sweep of October 2015 after nine years as an MP, spoke while surrounded by his wife and five children.

“We have such a unique opportunity in this race to make our voices heard,” Lemieux said. “You are making it heard by being here today, make it heard as well by how you vote in this Conservative leadership race.”

Lemieux asked Conservative Party members to put his name “in that number one spot” on the ranked ballot.

“I am pro-life, I am social conservative, I am pro-freedom of speech, and I am Canadian, and these are Canadian values,” said Lemieux, a Catholic and retired Air Force lieutenant colonel.

Added Lemieux: “And if you share these values and you are not in our party, our party is too small … In this race you need to be politically engaged in order to stand for life in all of its aspects.”

He concluded by thanking the cheering thousands on the Hill for “standing with me, standing with my family, all of us standing together for life. We stand on guard for life!”

Alberta MP Garnett Genuis read a brief statement from Saskatchewan MP Scheer, 37, a Catholic father of five who has maintained a perfect pro-life voting record since he was elected to Parliament in 2006.

“I’m sorry I cannot be with you in person today,” Scheer said in his statement.

“Our right to speak, to march, and to be heard is fundamental, and as someone who is pro-life, I thank each and every one of you for being here today at the seat of our government to make your views known.”

Under Scheer as leader and prime minister, “all Conservatives would be welcome in my caucus,” in contrast to Prime Minister Trudeau, who permits only “pro-choice” Liberal candidates, his statement read.

Canadians “need a prime minister who will support bills like Molly’s law,” Scheer’s message said. The private member’s bill put forward by Saskatchewan MP Cathay Wagantall “would have amended the Criminal Code to protect pregnant women and their unborn children from violent attackers.”

Trudeau announced on International Women’s Day that Canada had earmarked the $650 million over three years to promote and provide access to abortion in developing countries.

A number of MPs urged the Conservatives in the crowd to vote for a pro-life candidate in the leadership race, which Alberta MP Arnold Viersen described as “somewhat of a pivotal moment in our party.”

Lemieux and Trost have been endorsed by Campaign Life as supportable candidates, based on their voting records and campaign statements.

Campaign Life chose not to endorse Scheer because he has said he would not “reopen the abortion debate” as leader of the party.

Does Andrew Scheer’s plan to unite Conservatives leave out the unborn?

Lemieux: Pro-lifers must stop giving up ground in Canada and join the Conservative Party