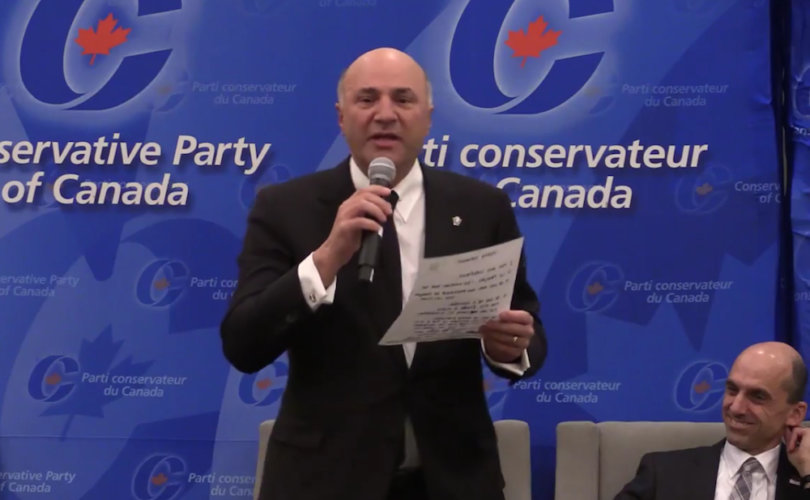 MONTREAL, February 15, 2017 (LifeSiteNews) – At Monday's debate for Conservative Party leadership candidates, frontrunner Kevin O’Leary declared that there would be no room for social conservative values if he won the election.

Not a party member until he began his run, O’Leary responded to a question from the floor about his conservatism by emphasizing the need to appeal to the young voter. Only liberal positions on social issues would do this, he said. Then he offered his views in a manner expressing impatience with the issues and with social conservatives.

“So LGBTQI done, marijuana done, reproductive rights 100 percent. Get used to it, that is the definition of the Conservative Party of Canada going forward,” O’Leary said.

“Half the people booed him. And not just for the values he expressed. But for telling us, ‘I’ll decide how things will go now.’ People felt, ‘Who the hell are you?’” event organizer and Pierrefonds-Dollard riding president Frank Dumas told LifeSiteNews.

O’Leary went into the Montreal debate with the support of 31 percent of Conservative members, twice that of his nearest rival. A Globe and Mail story published just before the debate that listed his weak points did not mention his liberal social values. The big problem, it said, was his inability to speak French.

Even with O’Leary’s unilingualism, The Globe and Mail story said, “A surprising number of Conservatives with a track record of winning are behind him. He is attracting new members, money and buzz.”

Jack Fonseca of Campaign Life Coalition told LifeSiteNews that the Tories did seem to be “trending away from social conservatives and falling in behind O’Leary.” He criticized O’Leary for suggesting that if he became leader, any debate on such issues as abortion and transgender should end.

“If we as social conservatives fail to get enough support, so be it,” Fonseca said. “That’s democracy.” But to say our issues shouldn’t even be discussed, that’s not democracy.”

“Some people say you can ignore the social conservatives because who else can they vote for? Trudeau? But they won’t vote for anybody. They will stay home.”

Fonseca warned that “choosing O’Leary as leader would be the kiss of death to Conservative Party, and more importantly, to the small-c conservative movement in Canada. He’s a liberal who would gut the party of its base and ensure that (Justin) Trudeau reigns over Canada for three, perhaps even four terms. You can’t win without the base, and the base won’t come along with a liberal at its head.”

“Even people who are only fiscal conservatives shouldn’t trust O’Leary. He  holds several economic, domestic and foreign policy positions that are quite liberal. And despite his big talk against Liberal carbon taxes, the man has never denounced global warming alarmism for what it is — a fraud based on junk science. In fact, O’Leary has made public statements that seem to suggest he actually believes that man-made global warming is real.  Grassroots party members should realize that even on issues like carbon taxes, there is a better choice. Of the 14 candidates, only Brad Trost has publicly said that man-made climate change is a sham. ”

Pro-life candidates Pierre Lemieux and Trost were not part of the debate. Mike Patton, Trost’s campaign manager, believes the party establishment excluded Trost and Lemieux because it has decided to back O’Leary and wants to silence his critics.

“There’s increasing less and less interest in Pierre and Brad being there at all,” Patton said. “They are tolerating them barely, and that’s about it as far as the party establishment goes.”

Patton insists the Trost campaign spoke with “advance” men for the party “and went back and forth with some questions and then confirmed, ‘Yes, we’ll be there. So, anyway, they went down and had no idea until they arrived onsite that they could not participate.”

Instead, organizers told him there was no time allotted for him and it was too late to make room. Both the Trost and Lemieux camps believe organizers could have been more flexible when the two men did show up.

Patton said, “There was no legitimate reason” why they could not have been accommodated. “You know, some things are complicated. Putting an extra astronaut on the space shuttle at the last moment is complicated. Throwing an extra chair on stage for an all-candidates debate is not complicated.”

Dumas said there was simply a miscommunication.

“We wanted them here. We have many social conservatives in this riding (Pierrefonds-Dollard), so if I left Trost out, I’d never hear the end of it,” Dumas said.

Both men were given a few moments at centre stage when candidates Kellie Leitch and Rick Peterson yielded the floor to them.

Dumas said his volunteer team tried hard in January to get Trost and Lemieux or their staff to confirm attendance. Eventually they picked a deadline at the end of the month and told all candidates to confirm by then. Dumas thinks that Lemieux probably never received emails from the organizers. However, Trost’s team, he is sure, was told about the deadline but never responded.

Dumas denied the two candidates were excluded because of their beliefs.

“That’s not the case at all. We wanted them because they are social conservatives,” he told LifeSiteNews.

Trost has the support of 10 percent of Quebec Conservatives “and he has about 30 percent in my riding. There are a lot here with solid Christian beliefs. And we have about 14,000 Jewish voters, especially some Orthodox Jews. They like many of the things that he says.”

Dumas promised to organize a “meet-and-greet” social event for Lemieux and Trost or even a debate because “they don’t agree on everything. These guys have a place in this party.”

For his part, Lemieux told LifeSiteNews he had expected to participate but considers what happened a miscommunication and not bias against so-cons.

“I am disappointed, but I do not lay blame at anyone’s feet,” he stated via email.

For information on signing up to support Trost or Lemieux in the Conservative Leadership vote, go here.