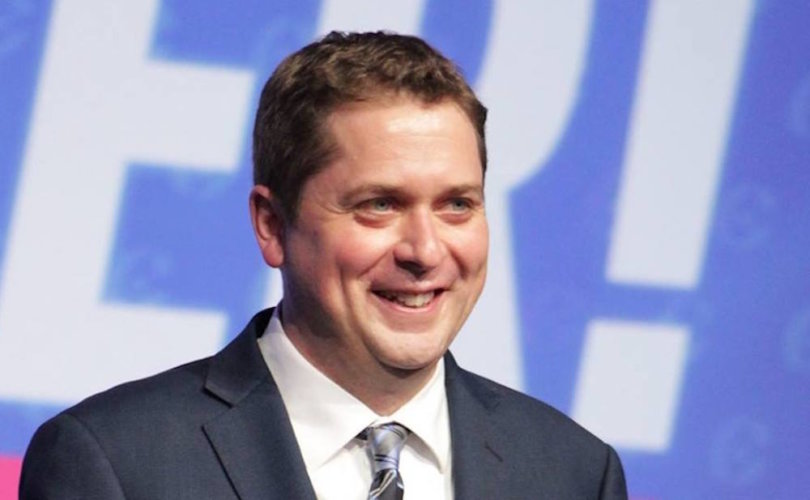 TORONTO, May 29, 2017 (LifeSiteNews) — A Catholic father of five and Member of Parliament (MP) with a strong pro-life and pro-family voting record has become the new leader of the Conservative Party of Canada.

In a surprise victory Saturday night, 38-year-old Andrew Scheer won on the final, 13th ballot. He took with 51 percent of the vote compared to frontrunner Maxime Bernier’s 49 percent, after trailing Bernier for the first 12 ballots. The vote took place at the party’s leadership convention in Toronto.

Scheer ran on a campaign to unite conservatives by promoting the “best policies” of the party. Some of his promises on the family and freedom fronts include defunding universities that do not respect freedom of speech, supporting the rights of parents as first educators of their children, and making maternity benefits tax-free. He will attempt to defeat Liberal Prime Minister Justin Trudeau in 2019.

Scheer, who had a perfect pro-life and pro-family voting record since becoming an MP in 2004, stated at the outset of his campaign that as prime minister he would not introduce legislation that would reopen the abortion debate.

When LifeSiteNews asked Scheer in a March interview if as party leader he would have a place for people who hold pro-life and pro-family values, he replied “absolutely.”

“In all my speeches I always talk about the fact that we need every kind of conservative in the tent,” he told LifeSiteNews.

“People who share those beliefs are some of the most positive people I know and they do it out of genuine concern for their community,” he added.

When asked if he would be like former Conservative Party leader Stephen Harper, who voted pro-abortion and pressured members to oppose pro-life measures, Scheer said that a good leader tries to find “common ground.”

“There are a lot of aspects of these issues that are not going to unite conservatives that would cause divisions within our own party and unite the opposition and likely not pass, but a good leader can find the common ground between some of those things,” he said.

Scheer said that he would “absolutely protect the rights of individual MPs to speak up and voice their concerns on issues of all types.”

“When I was speaker I had a landmark ruling that upheld the principle that the right to speak in the House of Commons does not come from a party leader, it comes from the voters who sent that person to the House of Commons in the first place. So, that would be my approach,” he said.

He also said that he would “absolutely protect the idea of free votes on matters of conscience.”

During the National March for Life in Ottawa on May 11, Scheer passed a message to the thousands gathered to demand justice for the preborn through MP Garnett Genuis. In a message read by Genuis, Scheer, called himself “pro-life” and criticized Prime Minister Trudeau’s pro-abortion “ideological agenda.”

Five MPs endorsed Scheer’s campaign on stage during speeches at the March for Life, organized by Campaign Life Coalition.

Campaign Life Coalition did not endorse Scheer because of his remarks against introducing pro-life legislation.

But in a statement after his leadership win, they congratulated him and emphasized his pro-life voting record.

“The results of the race demonstrate the strength of the social conservative movement and importance of pro-life and pro-family voters,” they stated in a press release. “Andrew Scheer says he will focus on the best policies of the party and what unites the Conservatives. The best policies of the CPC include its opposition to gendercide abortions and protection for preborn victims of crime. We look forward to working with Scheer in fighting for these policies which have already been endorsed by a majority of delegates at last year’s CPC policy convention.”

“Social conservatives make up a significant block within the party and their views and concerns should be respected,” said Jeff Gunnarson, Vice-President of Campaign Life Coalition. “The party must acknowledge that pro-life and pro-family voters are part of the Conservative Party’s winning coalition, by promoting policies that speak to the values of many Canadians.”

Jim Hughes, national president of Campaign Life Coalition, also thanked Trost and Lemieux, whom they had endorsed. “[They] were unapologetic in their pro-life convictions, and made pro-life issues part of their leadership platforms,” he said. “Scheer was propelled to victory by the redistribution of the Trost votes.”

Trost, who came in a surprise fourth place, told CTV News that his strong finish shows that the pro-life-and-family views he represented “are held by a wide percentage of the party.”

Trost said he is looking forward to working with Scheer. He said he will “continue” to oppose abortion in Canada, adding that it will be one of the issues that will be on the “front burner” within the party to be discussed.

“It will be part of the debate,” he said.

I'm sorry I cannot be with you in person today. This is an important event where thousands of Canadians gather in Canada's capital to speak out on and support life.

Our right to speak, to march, and to be heard is fundamental. And as someone who is pro-life, I thank each and every one of you for being here today at the seat of our government to make your views known.

Where Justin Trudeau believes that in order to stand as a Liberal candidate you must be pro-choice, I am proud to be running for leader of the Conservative Party to become a prime minister under whom all conservatives would be welcome in my caucus.

We need a prime minister who will support bills like Molly's Law, which I was proud to vote for and which would have amended the Criminal Code to protect pregnant women and their unborn children from violent attackers.

Where Conservatives promoted maternal and child health in their aid to developing countries, Trudeau is spending 650 million tax dollars to export his ideological agenda, something that I have spoken clearly and decisively against. I hope you will stand with me and with the overwhelming majority of pro-life members of Parliament and include me at or near the top of your ballot.