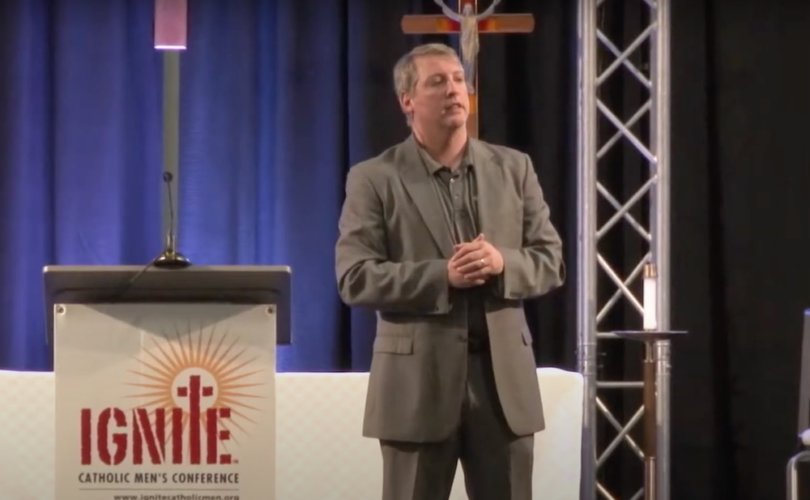 PHILADELPHIA (LifeSiteNews) — Mark Houck, the pro-life Catholic author, leader, and father of seven who was arrested by the FBI in a dawn raid Friday morning, pleaded not guilty Tuesday to the federal charges lodged against him.

LifeSiteNews broke the now-viral story of Houck’s Friday arrest by the FBI. The arrest stemmed from an alleged altercation between Houck and an abortion facility employee outside a downtown Philadelphia Planned Parenthood last year, where Houck was praying with his 12-year-old son.

Prosecutors allege Houck, the founder and president of The King’s Men, which promotes healing for victims of pornography addiction and promotes Christian virtues among men, violated the Freedom of Access to Clinic Entrances (FACE) Act when he allegedly pushed an abortion clinic employee twice in one day in October 2021.

The FACE Act makes it a felony to use force to intimidate, injure, or obstruct pro-life or pro-abortion protestors or abortion facility workers, or to obstruct or destroy abortion facilities or pro-life pregnancy centers.

The pro-life leader’s wife Ryan-Marie told LifeSiteNews on Friday the abortion facility worker had been harassing their 12-year-old son by using vulgar language and getting into the boy’s “personal space,” and that Houck had shoved him away to protect his son.

Speaking outside the courthouse, Breen said that the abortion worker in question had been “extremely aggressive” and was “harassing” Houck’s son before an “altercation ensued,” Fox reported.

Breen explained that the case against his client had been tossed out of the state courts but was picked up again by the Biden administration’s Department of Justice (DOJ) almost a full year later.

“This is a political prosecution,” Breen said. “And what’s clear from the Department of Justice at its highest levels, which is directing this case, [is] that they are trying to send a message to pro-life and people of faith: ‘Don’t mess with us.’”

“They want to intimidate — they want to cause good people like Mark to stop praying and counseling at the abortion clinics of our country,” the attorney said.” And that’s not going to happen.”

Speaking about the roughly 20 FBI agents who arrived, guns drawn, to Houck’s home Friday morning, Breen argued the Biden administration’s DOJ treated Houck “as if he was a drug lord or a mafia boss.”

“If he was truly a danger to the community, they wouldn’t have waited a year to prosecute,” he said. “Serious questions need to be asked of the attorney general. What was he thinking? Why did they do this obscene show of force against a peaceful pillar of the community?”

An FBI spokesperson and senior source confirmed Monday in statements to Fox News Digital that the arrest occurred, and that more than a dozen armed agents went to Houck’s home with their guns drawn. They sought to deny aspects of the report, however, arguing that the armed FBI agents weren’t part of a SWAT team, there were no more than 20 agents present, and that they didn’t point their guns directly at Houck or his family.

Mark Houck was released from custody later on Friday after his morning arrest. The father of seven young children faces felony charges that could lead to up to 11 years in prison and fines totaling as much as $350,000.

A GiveSendGo fundraiser has been set up for the Houck family and has reached over $270,000 in donations.