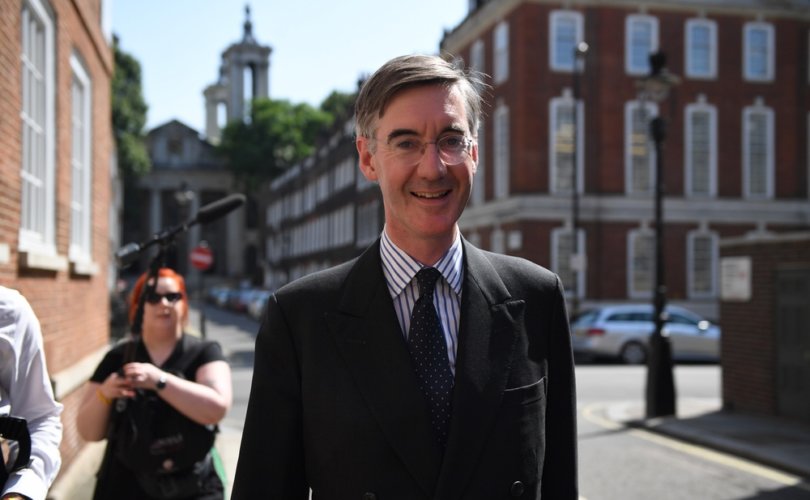 LONDON, England, July 25, 2019 (LifeSiteNews) – Jacob Rees-Mogg, the Member of Parliament who is known for loving the Traditional Latin Mass and defending life and marriage, will serve as the leader of Britain’s House of Commons while Boris Johnson assumes his role as the country’s new prime minister.

Rees-Mogg is member of the Conservative party and Brexit advocate. He told SkyNews on Wednesday that his new role is a “very interesting job to do” and “something that I’m very interested in because parliamentary procedure and practice is something I’ve spent a lot of time on.”

Rees-Mogg described Prime Minister Johnson as “a man with a mission,” adding: “Boris will deliver Brexit and then important domestic policies. The sun will be shining.”

Rees Mogg is a devout Catholic who has drawn the ire of LGBT and abortion advocates for supporting man-woman marriage and the right to life.

“Jacob Rees Mogg, who opposes abortion in cases of rape, and who ardently opposes LGBTQ rights, is now one of the most powerful politicians in Britain,” tweeted a socialist columnist for The Guardian.

He also fretted, “Boris Johnson’s Cabinet has no LGBTQ members, but several who have actively opposed and fought LGBTQ rights. It’s a real and present danger to LGBTQ people and their rights.”

Throughout his career in parliament, Rees-Mogg has voted against same-sex “marriage.” Britain recognized homosexual unions in 2014. In 2017, as Minister of Parliament, Rees-Mogg told Good Morning Britain: “I’m a Catholic, I take the teaching of the Catholic Church seriously.” He added, “Marriage is a sacrament and the view of what marriage is is taken by the church, not parliament.” He also averred that he is “completely opposed to abortion,” even for babies conceived in rape.

I am honoured to be able to serve our new Prime Minister and the country. pic.twitter.com/7QBh5YuB2Z

Rees-Mogg has also slammed LGBT advocates for “shutting down debate” on transgender issues.

Leader of the House, Lord President of the Council

As Leader of the House of Commons, Rees-Mogg will organize Prime Minister Johnson’s political agenda in the deliberative body. Johnson’s office, according to various media, has confirmed that Rees-Mogg will attend cabinet meetings and may have influence over policy. He has also been given the role of Lord President of the Council, which means he will lead meetings of the Privy Council. This means that he will directly advise Queen Elizabeth II. The Privy Council also has some authority over Britain’s Civil Service.

Born in 1969 and – as was PM Johnson – educated at Eton College, Rees-Mogg has been a member of parliament since 2010. He and his wife have six children, the youngest of whom is named Sixtus Dominic Boniface Christopher. Upon announcing his new role in Parliament, Rees-Mogg affirmed that he is stepping down from Somerset Capital Management, the investment firm that he co-founded.