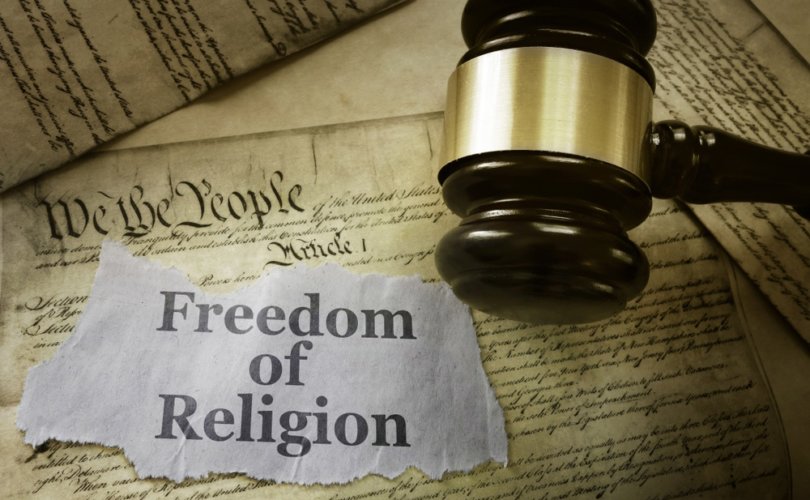 CLARKSVILLE, Tennessee (LifeSiteNews) — A pro-life Catholic woman won a $10,000 settlement and an apology letter after filing a federal lawsuit against her union for unlawfully discriminating against her religious beliefs and refusing to grant her religious accommodation request.

The settlement comes after union bosses reportedly demanded the plaintiff pay union dues despite her objections to the organization’s pro-abortion stance, instead denigrating and challenging her religious beliefs and even those of her parish priest.

Dorothy Frame opposes funding the LIUNA union due to its stance on abortion. Instead of providing her an accommodation, union bosses questioned her religious beliefs.

Former Blanchfield Army Community Hospital employee Dorothy Frame filed the lawsuit against the International Laborers Union (LIUNA), which has about 500,000 members, in December 2019, with the assistance of the National Right to Work Legal Defense Foundation (NRTW).

According to a press release issued by NRTW, Frame requested a religious exemption in July 2019, after she was informed she would be required to pay union dues as a condition of employment.

While Tennessee has a Right to Work law which prohibits employers from requiring private sector workers to pay union dues, the Fort Campbell location in which Frame was employed is considered a “federal enclave” and is therefore not subject to state law.

Frame — who converted to Catholicism in 2017 — applied for a religious exemption to the rule, arguing that she could not in good conscience pay the required dues because of the union’s stance on abortion. To bolster her objection, Frame included a letter from her parish priest backing up her pro-life religious beliefs.

“Ms. Frame believes that abortion is a grave sin,” her lawsuit detailed. “She believes joining or financially supporting the Unions would make her complicit in that sin because she believes that the Unions support and promote abortion.”https://t.co/QhGNe1pmMU

According to the NRTW press release, “Federal law prohibits unions from discriminating against employees on the basis of religion, and requires unions to provide accommodations to workers who oppose dues payment on religious grounds.”

Instead of granting her religious accommodation, however, union officials reportedly “rejected and ridiculed her requests,” with one union lawyer even going so far as to challenge her understanding of her own Catholic faith and that of her parish priest.

Frame’s request was met with demands from union lawyers for a “legitimate justification” for her objections. Meanwhile a union lawyer reportedly implied that Frame and her parish priest’s understanding of their own faith was faulty, closing a letter by “sending Ms. Frame — and her priest — remedial church readings.”

“It crushed me, it hurt me so deeply. Not just for them to say that to me, but to tell my priest that,” Frame said, adding it also made her “more determined.”

“In their lust for more forced union dues, LIUNA bosses not only violated longstanding legal precedents against forcing workers to fund a union when doing so violates their faith, but even went out of their way to insult Ms. Frame and her priest’s religious views,” NRTW President Mark Mix told LifeSiteNews in a March 29 statement via email.

In response to the union’s refusal to grant a religious accommodation, and continued derision aimed at her sincere religious beliefs, Frame filed a discrimination charge against LIUNA with the Equal Employment Opportunity Commission (EEOC) in December 2019.

Though union officials reportedly refused to back down and rejected requests to return the money they had withdrawn from her paycheck following her accommodation request, the EEOC issued Frame a “right to sue” letter, which ultimately led to her federal anti-discrimination lawsuit, filed by NRWF staff attorneys.

After years of litigation, the union finally reached a settlement, agreeing to pay $10,000 in damages to Frame and $30,000 to her attorney. A union attorney is also required to send Frame a letter apologizing for the union’s inappropriate actions.

“I knew in my heart and in my soul that I was right,” Frame said in response to the settlement, according to the press release. “This is one of the greatest things that I’ve ever done in my life. It was hard; it was so hard.”

In another statement provided with the legal group’s press release, Mix spoke about the need for legal protections for other American workers who, like Frame, find themselves subjected to “Big Labor’s government-granted privilege to force” employees “to support their activities,” a privilege which Mix argued “creates a breeding ground for such malfeasance and anti-worker abuse.”

“No American worker should have to pay tribute to a union they oppose just to keep their job, whether their objections are religious or otherwise,” he said.

Mix told LifeSite the “mental anguish that LIUNA officials caused Ms. Frame” is an “example of the human costs associated with granting union officials the privilege to demand rank-and-file workers support their activities or be fired.”

“To ultimately end these kinds of abuses, all American workers need the protection of a Right to Work law so they can follow their consciences and freely decide whether or not union officials have earned their financial support and membership,” he said.