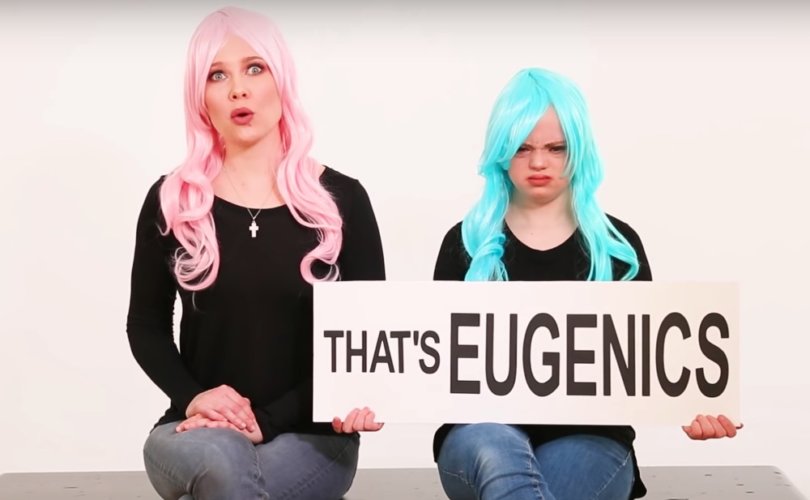 PETITION: Tell the UN to help stop abortion of Down Syndrome babies. Sign the petition here.

AJAX, Ontario, March 21, 2019 (LifeSiteNews) – The Ontario-based pro-life group Choice42 (Choice For Two) released another video in its popular “Just Saying” series this week, this time using satire to efficiently mock the justification for aborting babies specifically because of a Down Syndrome diagnosis. The video's launch coincides with World Down Syndrome Day.

Sporting the now-iconic pink wig denoting her satirical portrayal of a pro-abortion feminist, Choice42 founder and director Laura Klassen appears alongside a girl with Down Syndrome wearing a similar blue wig, using hair color as a stand-in for the genetic condition.

“I love people who have blue hair…but, like, after they're born, though,” Klassen says. “No offense! I totally respect and value you as a human being…now, but before you were born it was a completely different story.”

“Thanks to prenatal genetic testing, we can now 'off' all the people who have blue hair before they ever see the light of day! That's compassion.” As her companion holds up a sign reading, “THAT’S EUGENICS,” Klassen says “I literally don’t know what that word means” and shushes her before she can speak up.

Despite these challenges of Down syndrome, a 2011 study published in the American Journal of Medical Genetics found that 99% of people with Down syndrome described themselves as “happy,” and only 4% of parents with Down children expressed regret about having their child. Yet around the world, Down syndrome is seen as a justification for aborting preborn children.

In 2015, the pro-life Charlotte Lozier Institute estimated that abortion reduces the Down community in the United States by 30%. It has been estimated that 90% of babies in Great Britain to receive a Down syndrome diagnosis are aborted, 65% in Norway, virtually 100% in Iceland, and 95% in Spain.

Released to coincide with World Down Syndrome Day on Thursday, March 21, “Blue Hair” is the latest in a series of videos using humor to illustrate the fallacies of common pro-abortion arguments and tropes. Previous “Just Saying” entries mocked the notion that a “magical birth canal” automatically confers human rights on a preborn baby, the argument that men can’t discuss abortion because they can’t get pregnant, and abortion advocates’ tendency to avoid using the word “abortion.”

In addition to satirizing pro-abortion dogma, Choice42 works to connect women to crisis pregnancy resources and publishes more serious videos on topics such as the firsthand accounts of women who choose life in difficult circumstances.