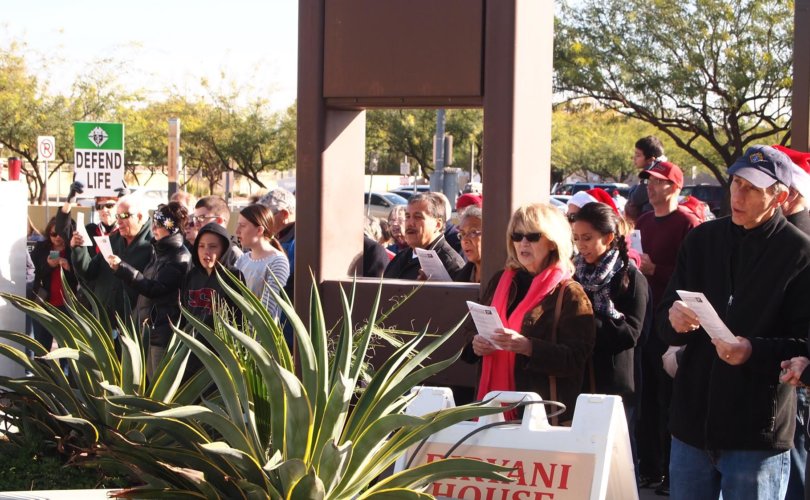 December 23, 2016 (LifeSiteNews) – The sound of Christmas hymns sung by pro-lifers outside a number of U.S. abortion mills is continuing to save numerous babies’ lives.

Two groups, Pro-Life Action League and Pro-Life Action Ministries, have organized caroling outside abortion facilities for years, and this year both have noted numerous children saved — at least six in the Orlando, Florida, area and several more in other parts of the country. In some cases, women changed their minds as a direct result of the Christmas carols sung by pro-life supporters, reinforced by their prayers and advocacy for abortion-minded parents.

The power of the hymns shouldn’t be underestimated, as the pro-life groups have recounted pregnant mothers and couples expressing thanks and telling them the singing touched them, helping to steer them away from abortion.

Pro-Life Action League Executive Director Eric Scheidler described for LifeSiteNews how three different couples turned around and walked away from abortion this year as carolers sang outside Family Planning Associates abortion center in San Bernardino, California. At least one couple was greatly moved by the hymns.

“What impressed me about this report is they actually stopped to tell the caroler group that they changed their mind,” Scheidler stated.

“The couple told them, ‘It was because of your caroling that we decided to keep our baby,’” he said. “The singing was the only thing that happened to change their mind.”

The pregnancy had put the couple’s marriage under pressure, Scheidler continued, making them think they needed to abort.

But when they came out and thanked the carolers, “They were holding hands and in tears,” he said. “This had introduced healing into their marriage.”

Pro-Life Action League reports that pro-life groups in 72 U.S. cities registered to take part in its “Peace in the Womb” Christmas Caroling Day this past Saturday, December 17.

Roughly seven had to cancel for inclement weather, but Scheidler said many groups will also take part on their own and not be included in the League’s overall count. Several others had potentially planned to carol again in the days leading up to Christmas Eve. Some performed on other days as well.

The League first began organizing the caroling day 13 years ago in its local area around Chicago, previously with an empty manger theme.

The event grew through the years and other saves have been reported, but participation this year seems to be remarkable.

Scheidler thinks the significant growth is attributable to this year’s revamped theme, and also election fatigue having people wanting to go out and do something that wasn’t related to politics.

The League had more than 50 percent growth in numbers of groups participating over last year.

“After we renamed it “Peace in the Womb” people really seemed to get it,” Scheidler said. “That, and the fact we’re not facing Hillary Clinton in the White House could have had some effect.”

In addition to abortion-vulnerable parents, Scheidler said passersby will be affected by the Christmas carols and join in signing.

Pro-Life Action Ministries began its “Caroling For Life” events several years ago. The organization with offices in Minnesota and Orlando had 6 babies saved this past Saturday, December 17, between several different abortion mills.

The group did not sing at the Orlando Planned Parenthood this year because the abortion chain cut back hours, Herzog said, and no mothers would have been seeking abortion there last Saturday. But they sang carols at the All Women’s Health abortion center in Altamonte Springs and two Orlando abortion mills run by notorious abortionist James Pendergraft.

Between them, the Pro-Life Action Ministries group saw two sets of twins and two other individual babies saved. Herzog said the facilities are set up so that the pro-lifers are able to sing and be seen from the waiting room window or the entrance, making contact much more possible than many other facilities.

“We sang, prayed and called out to the women,” Herzog recalled.

In one case she witnessed, two teenage girls with the pro-life group were singing a song they wrote themselves titled “Let me live.”

Herzog said a couple came out and told them, “We’re not doing it.”

“It was just really an amazing day,” she said. “It really was something else.”

Every year the group has sung the carols, they will touch at least one woman who is “so broken,” Herzog continued.

“These carols hit home,” Herzog said. “While they’re sitting in this dark, dark place, they hear us singing and praying, and it really does make a difference, and that’s why we continued to do them.”

Last year, she said a Muslim couple decided not to abort after hearing the Christmas hymns.

“God had just touched her with those carols,” Herzog recalled of the pregnant mom. “She just kept saying, “The songs, the songs.”

“It has quite an impact, I believe,” Herzog said.

“We're having a baby! We changed our minds,” a woman called out joyfully to Northwest Families for Life group caroling Tuesday, December 20, in conjunction with Pro-Life Action League’s “Peace in the Womb” Caroling Days in Wood Dale, Ill.

When they met the couple at the car, the group’s co-founder, Maria Goldstein, told LifeSiteNews, the man said to them with a big smile on his face, “Thank you. You're doing a great job!”

“What exactly was the “great job” we did?” Goldstein said. “We didn't counsel them on the way in; we didn't talk them out of the abortion; we weren't able to show them pictures of developing babies.”

“All we did was show up, pray, and sing,” she continued. “Maybe they heard our carols inside and felt God tug at their hearts. I guess that really is a “great job!” We got to bring the power of God to this dark place. God is good.”

It’s clear the impact hits the carolers as well.

James Kurt with Sidewalk Advocates for Life of Florida-affiliated group in Sarasota told LifeSiteNews the group had an increase from 25 to 40 participants between its first and second caroling days this year. The leader of their vigil was with them Friday for the first time in several weeks of missing their sidewalk counseling because of illness.

“He has been ill and not able to come for several weeks, but with his oxygen machine in tow he came up the sidewalk with his walker as we began “Noel,” Kurt said. “It was a great blessing for everyone to see him and he was overwhelmed too; a man not given easily to emotion, he wanted to hug me when we finished, he was so joyful at singing.”

The group had a save with their December 16 caroling event, and they plan to carol next week on December 30 as well.

Kurt told LifeSiteNews, “It will be within the Christmas Octave, you know.”