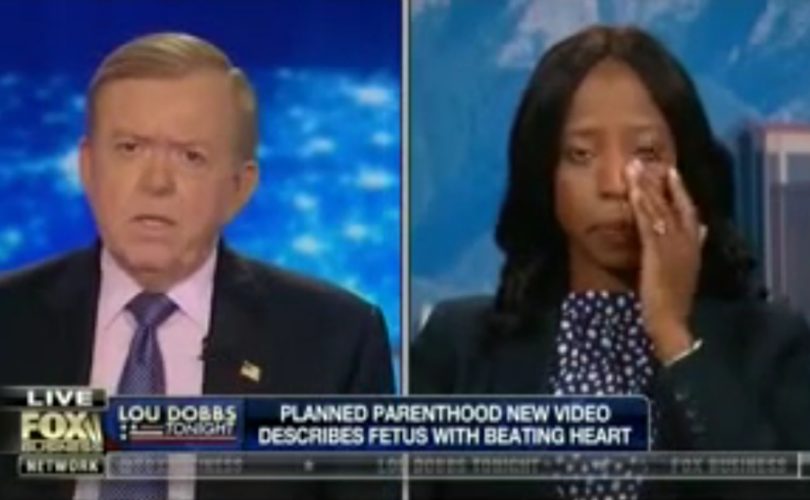 NEW YORK CITY, August 21, 2015 (LifeSiteNews) — Republican Congresswoman Mia Love of Utah says she teared up on national TV while discussing the Planned Parenthood fetal body parts scandal because “I get a little bit emotional just thinking about” the issue.

Love, who is a rising star in the GOP, got emotional while responding to a question about the fetal harvesting videos produced by the Center for Medical Progress. She told Fox Business host Lou Dobbs that “this is not about a right or left issue; this is about right or wrong.”

“It's absolutely horrific,” she said. “Here we are in the United States of America, and our job is to protect life, liberty, and the pursuit of happiness — first and foremost, life. And it's our job to protect those who do not have a voice for themselves. And to see what is actually happening to babies while they're still alive, I mean, it's horrific.”

“As long as I’m here, it’s my job to do whatever I can to get colleagues on both sides of the aisle to see what’s happening and stand up for what we believe is right,” said the mother of three.

Love was raised Roman Catholic, but has since converted to Mormonism. Both religions have pro-life doctrines, though the Church of Jesus Christ of Latter-Day Saints does allow for abortions “in the rare cases where, in the opinion of competent medical counsel, the life or good health of the mother is seriously endangered or where the pregnancy was caused by rape and produces serious emotional trauma in the mother.”

“Even then it should be done only after counseling with the local presiding priesthood authority and after receiving divine confirmation through prayer,” the church says.

A spokesperson for Love told LifeSiteNews that the Congresswoman “is adamantly pro-life,” but supports abortion in the cases of rape, incest, and health of the mother.