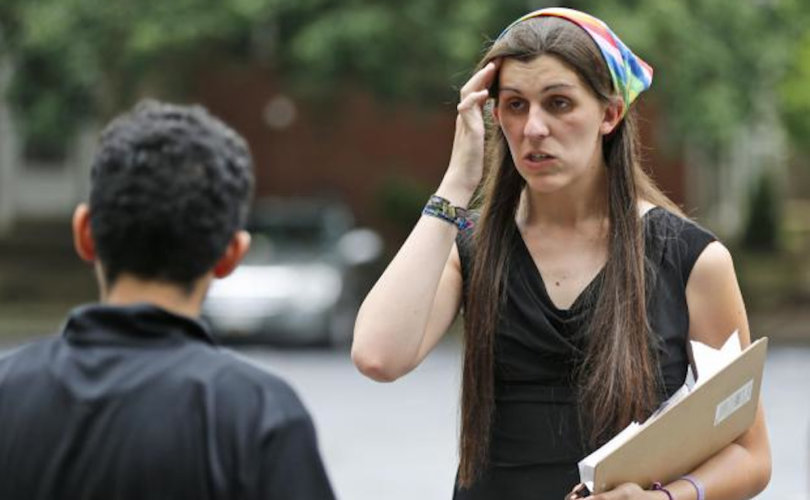 Daniel “Danica” Roem, a Virginia delegate who calls himself a woman.

RICHMOND, Virginia, November 1, 2017 (LifeSiteNews) — The eyes of the nation’s political pundits are fixed on Virginia.

Pro-life leaders and homosexual activists are vying for what could turn out to be the state’s first transgender seat in the state House on November 7.

Conservative incumbent Bob Marshall is facing perhaps the greatest challenge of his 25-year career with a nationally-backed transgender man, Daniel “Danica” Roem. The contest for Virginia’s 13th district, just west of the nation’s capital, is being dubbed “the Race of the Year” by political columnists.

“We have a groundbreaking opportunity to make … Roem is the first state legislator to win (the Democratic primary) as an ‘out’ trans candidate,” Gay and Lesbian Victory Fund president Aisha Moodie-Mills said.

A transgender popular vote, the lesbian leader explained, “is a critical first step to electing more trans people who can … fight back against anti-equality efforts.”

“This is an opportunity for us in the LGBTQ community to push back,” Moodie-Mills said. “LGBTQ leaders … are leading the resistance.”

The homosexual activist clarified that the ultimate goal is to oust social conservatives from government. “We’re going to make sure that we get rid of people who do our community harm.’”

Marshall is one of the strongest pro-life, pro-traditional marriage, and pro-natural family advocates in politics today. He has repeatedly led the fight in the Virginia state legislature for gender-separate bathrooms, ultrasounds before abortions, and other pro-life laws. He stands against the military recruitment of transgenders and calls the nation’s epidemic of internet pornography a public health hazard.

Roem’s agenda is the polar opposite of Marshall’s. “It’s time for us to take out those parts of our state code that still make us a regressive place,” he said, referring to pro-marriage and family legislation. He told Virginia radio host Larry O’Connor that he believes in transgender education in public schools, with kindergarteners being taught that they can change their sex.

Roem, 32, is a local journalist who publicly proclaimed he was a woman in 2013. He changed his name to “Danica” and switched his legal gender because Virginia has no objective requirement for sex changes. He takes opposite sex hormones to give the appearance of femininity.

The self-diagnosed transgender criticizes Marshall for refusing to call him a woman.  “You can change appearances, but your DNA fixes your bodily structures for your entire life,” Marshall said, citing research gleaned from the National Library of Medicine.

Marshall told Breitbart that liberals are pulling out all the stops to defeat him. “I am the number one target of the Democrats” nationwide, he said. “If they beat me, this will put (conservatives) in the closet for years.” He noted that many GOP politicians funded by big business are already afraid of taking a principled moral stand.

Roem is strongly supported by homosexual activists across the nation. He has out-raised Marshall 5-to-1, with the largest of his war chest funding coming from out of state.  Wisconsin businessman Chris Abele, a Hillary Clinton backer who has never met Roem, made a $115,000 donation. After vowing not to accept contributions above $500, Roem reconsidered and took the Abele’s cash.

Marshall sharply criticized Roem’s flip-flop, characterizing the multimillionaire Abele as trying to “buy the election for Danica to impose laws penalizing those who adhere to the ‘Laws of Nature and Nature’s God.’” The 72 year-old stalwart hopes to raise “half of what (Roem’s) got.”

Members of the mainstream media join the ridicule, mocking Marshall’s stand for the preborn by calling him Virginia’s “Minister of Private Parts.”

The personal digs go both ways. When Marshall was asked why he refers to Roem using male pronouns, the incumbent responded, “Why do you call Danica a female? Did Danica’s DNA change?”

Roem loves “death metal” and sings in the thrash-metal band Cab Ride Home, whose biggest hit, “Drunk on Arrival,” is a wild anthem about getting plastered.

His “death metal” devotion runs deep. “The metal community … is as much a part of my personality as everything else,” he admitted. “It’s a lifestyle. It’s the aesthetic that you have. It’s the personality that you put on display. It’s the way that you talk to your friends. … The lyrics inspire part of your life. The music tells your story.”

Some of his favorite groups include Cannibal Corpse, Dark Tranquility, and Life of Agony. Roem doesn’t shy away from associating himself with the infamously rebellious lifestyle. “Just because I sing in a heavy metal band while spinning my head in circles and getting paid to do it, why can’t I run for government?”

But the metal lifestyle has had its effect on the guitarist. “I’m probably a lot more vulgar that most people when it comes to public office, I’ll give you that,” he told Vice.

Republicans currently hold 66 of the 100 House districts, but all 100 are up for election in seven days.

“Virginia primaries are low-turnout affairs,” University of Mary Washington political science professor Stephen Farnsworth told NBC News. “The advantage will go to the candidate who is best at getting their supporters to show up on primary day.”

Roem, who grew up and spent 13 years in the Catholic school system, assessed Marshall as “ripe for the picking this year,” calling him “one of the most vulnerable Republican incumbents in the state of Virginia.”

“I’ve analyzed the numbers. I can win this race … I have proven I have the infrastructure to do it,” Roem ensured, claiming his campaign “has knocked on 6,000 doors to date.”

A record 20 transgenders are running nationwide this election cycle.