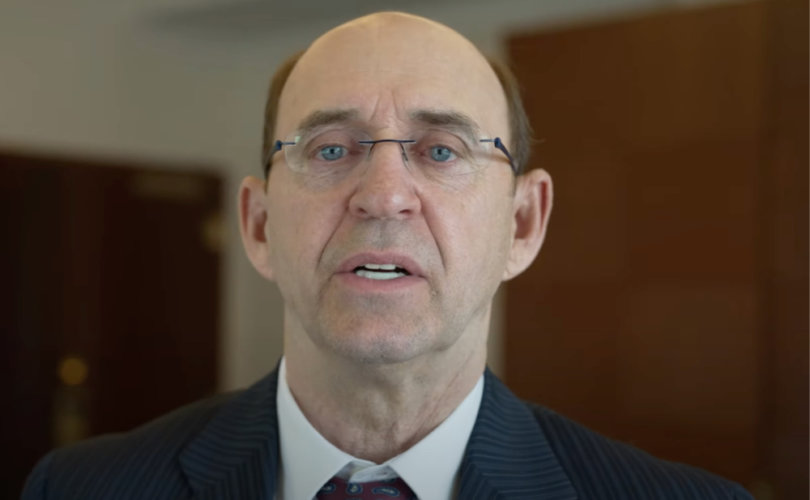 (LifeSiteNews) — Pro-life Saskatchewan businessman Joseph Bourgault officially made the first cut to enter the leadership race of the Conservative Party of Canada (CPC) and helping him in his campaign is retired Canadian hockey gold-medal Olympian and Stanley Cup champion Theo Fleury.

“This guy’s the real deal, get out to his events,” Fleury said of Bourgault while joining him at a campaign event on Thursday in Airdrie, Alberta.

“He’s going to lead us to glory,” Fleury added.

Bourgault thanked Fleury for his endorsement.

“And so, working with Theo, we are going to take back our country,” Bourgault said.

In a tweet on Friday of the video with Fleury endorsing him, Bourgault confirmed that the CPC “approved” him as an “Official Candidate.”

Fleury said that one of the main reasons he is endorsing Bourgault is because he is “the only candidate in the race who’s not connected to the World Economic Forum in some way, shape or form. So that’s why I’m here.”

Fleury has been calling out the COVID mandates enacted by Canadian politicians since nearly the start of the lockdowns in April 2020.

The World Economic Forum (WEF) is a globalist organization with radical plans created by global elites that seeks to “push the reset button on the global economy” and establish a New World Order.

Bourgault is the president and CEO of Bourgault Tillage Tools and founded “Canadians for Truth, Freedom, and Justice.”

Campaign Life Coalition (CLC) gave him its full endorsement, saying he is a “stellar pro-life, pro-family candidate who will also advocate for religious freedom, free speech and against authoritarian mandates on abortion-tainted vaccines.”

CLC’s Director of Political Operations Jack Fonseca wrote, “Bourgault made the bold move of putting his pro-life and family values agenda front and centre on his campaign website.”

On Bourgault’s website, there is indeed a section called “Creating a Pro Life and Family Culture.”

“We also aim to create support structures to help families experiencing unplanned pregnancy to ensure that they have the financial, spiritual and social support to be confident in raising a healthy and happy family,” reads the text on Bourgault’s website.

Bourgault also has the support of Dr. Roger Hodkinson and Dr. Daniel Nagase, two Canadian doctors who have spoken out against both the COVID lockdowns as well as the COVID vaccines.

Bourgault said he stands for “Truth, Freedom, and Justice for all,” and that he is opposed to COVID vaccine mandates and vaccine passports.

“My vision is to ensure that the government is restored to its true function of Serving the People of Canada. Our Canadian Culture has been formed around God as the Creator, Love as a Guiding Principle, Truth & Honesty, and Freedom with Responsibility,” Bourgault notes on his website.

“The Liberal Government has been destroying Canadian culture and as a result our Freedom is eroded, our citizens divided, our media slanted, our economies weakened, our financials depleted and our government corrupted. All of this in an environment with less rights and at a higher cost to all Canadians. This cannot be tolerated by Canadians any longer.”

CPC Front-runner Pierre Poilievre has a “red-light” rating for his voting record regarding abortion. However, he, like Lewis, has come out strongly against federal COVID vaccine mandates.

While Bourgault made the first cut to enter the CPC leadership race, he still must raise the remaining funds for the $300,000 total registration fee by April 29.

At least nine candidates have reached the first deadline to run in the leadership race for the CPC.