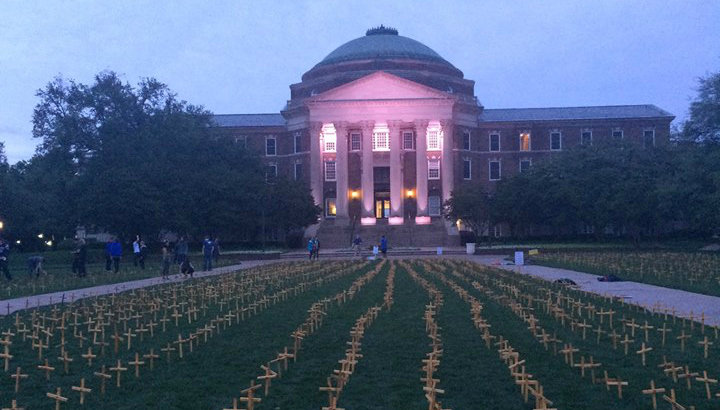 DALLAS, TX, April 22, 2016 (LifeSiteNews) — Southern Methodist University's Students for Life group, Mustangs for Life, has been the target of vandalism and threats, and is asking authorities to open an investigation to find who is harassing them.

The pro-life group had gained university permits to put up a 2,904 cross display on campus, symbolizing the number of babies aborted every day in the U.S.  Students worked hard together setting up the display, and put up signs explaining, “Memorial of Innocents: 1 Cross = 1 Life Lost to Abortion Today.”

Within hours of being set up, in the middle of the night, the display was demolished  Every cross was kicked over.

Mustangs for Life has since received additional hostile messages, including threats of violence, on social media. One person threatened to burn down the display.  Another threatened bodily harm to prolifers.

“I kicked your s*** down last night,” one person admitted in a post on the social media app Yik Yak, referring to the crosses.

“I'm gonna stomp on this s*** tonight so if you wanna fight me I'll see you there,” another poster threatened.

Refusing to back down, Mustangs for Life rallied, gathering 30 people to put all the crosses back up at 6 o’clock the next morning. Dedicated students also took shifts watching over the display, to ensure no more vandalism occurs.

“This is the pro-life generation in action,” said Kristan Hawkins, president of Students for Life of America. “This is the kind of perseverance that gives us hope that abortion will come to an end. We are so proud of the Mustangs for Life and the courage they have shown in the face of opposition.”

The pro-life student group filed a campus police report, initiating an investigation.  Campus police are also keeping a close eye on the display.

Unfortunately, vandalism aimed at pro-life groups on university campuses is not new. In March 2015, vandals destroyed 3,000 prolife posters at the University of Alberta.

In February 2015, a “Prayer Walk” display was vandalized at Christian Baylor University.

In 2012, protesters at Western Kentucky University in Bowling Green desecrated a pro-life display on campus with condoms. Campus police even allowed Elaina Smith and her boyfriend to finish placing condoms over the crosses, and take a picture for class.  Smith said she had her professor’s permission for the “project.”

In 2011 and 2015, pro-life crosses were desecrated at Pennsylvania University.

A pro-life display at the University of Mary Washington was attacked in 2011 by vandals who wrote over the pro-life messages, “Death to Fascists.”

Many other examples of violence have occurred, at Ohio State University, St Thomas Aquinas College in Michigan, and elsewhere.  Even university professors and student senators have reacted with violence to pro-life speech.

Youths bounce back after vandals destroy their thousand crosses for life