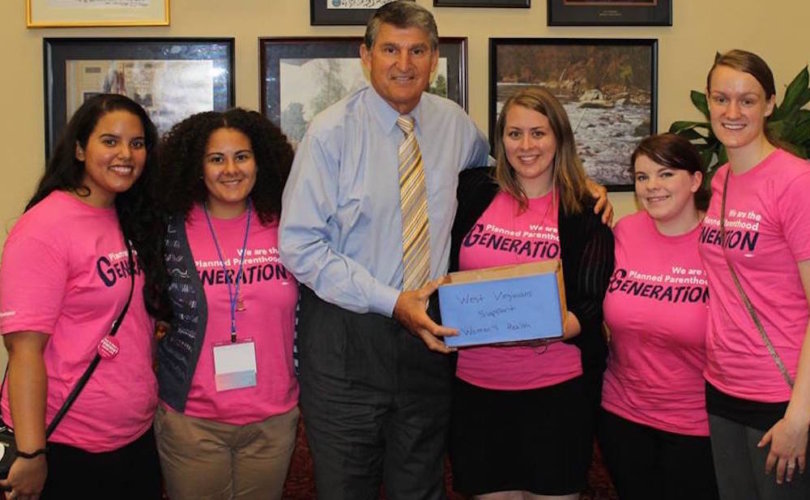 WEST VIRGINIA, November 2, 2018 (LifeSiteNews) – Just days before facing a re-election vote in West Virginia, self-professed “pro-life” Democrat Sen. Joe Manchin has come out against a ballot initiative that would clarify that there is no “right” to abortion in his state’s constitution.

Next week, West Virginia voters will decide whether to approve Amendment I, a proposed constitutional amendment that states, “Nothing in this Constitution secures or protects a right to abortion or requires the funding of abortion.” The measure is meant to counteract a 1993 court ruling that forces Medicaid to fund abortions as a state-level constitutional “right.”

During Thursday night’s debate against his Republican challenger, state Attorney General Patrick Morrisey, Manchin fielded a question about whether he would back the amendment, Breitbart reports.

I was born into a pro-life family. I was raised pro-life and I have always voted pro-life my entire public career, with the exceptions of the life of the mother, rape and incest,” he claimed, accusing state GOP lawmakers of “decid[ing] to make it political” by leaving those exceptions out of the amendment. “The only thing I’ve said if those exclusions are not in there it is not something we should be voting on.

“As the amendment stands now, you are against the amendment,” moderator Hoppy Kercheval pressed for clarification.

“Because it does not have the exceptions of incest, rape, and the life of the mother,” Manchin confirmed.

Manchin’s litmus test is a curious one, as the amendment doesn’t ban any abortions for any reason, and in fact doesn’t even challenge Roe v. Wade; it simply declares that the state constitution leaves the question to the voters and the legislature.

Also on Thursday, West Virginia’s Mountaineer Journal reported that it had uncovered a previously-overlooked photo of Manchin posing with pro-abortion volunteers, from a 2015 Facebook post by Planned Parenthood Votes South Atlantic. It shows Manchin smiling with a group of young women in “We are the Planned Parenthood Generation” t-shirts, holding a box that says “West Virginia Supports Women’s Rights.”

These are the latest in a series of incidents critics say impugn Manchin’s pro-life credentials. Last year, he received widespread mockery and condemnation for holding an “I stand with Planned Parenthood” sign in another photo with a constituent, while elsewhere happily posing with a Students for Life sign proclaiming, “we don’t need Planned Parenthood.”

Manchin has a mixed voting record on abortion issues, and did ultimately support confirming Justice Brett Kavanaugh to the Supreme Court. However, he also voted against a budget amendment to defund Planned Parenthood in August, falsely claiming the abortion giant’s federal subsidies don’t benefit its abortion operations.

He also claimed that defunding would hurt women’s legitimate health needs, despite the fact that West Virginia has more than 300 federally-qualified health centers and rural health clinics that could receive the aid instead of Planned Parenthood.

“Senator Joe Manchin claims to be pro-life but tonight he announced he will not stand up for the most vulnerable Mountaineers – the 1,500 children a year who perish in abortions, paid for by taxpayers,” Susan B. Anthony (SBA) List president Marjorie Dannenfelser said in response to his Amendment I answer. “Sen. Manchin does not stand with pro-life voters. He is just another pro-abortion radical who will side with the abortion lobby that wants to keep taxpayers complicit in abortion on demand up to the moment of birth.”

SBA List has pledged $500,000 this campaign season to educate West Virginia voters on Amendment I, and $785,000 to educate voters about Manchin’s support for America’s largest abortion chain.

Manchin currently holds an 8.7-point lead over his pro-life challenger Morrisey, according to RealClearPolitics’ polling average.