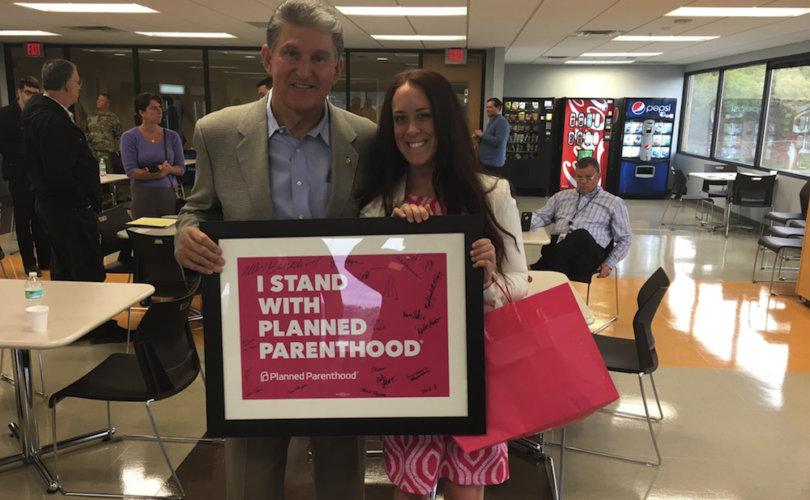 HUNTINGTON, West Virginia, April 26, 2017 (LifeSiteNews) — These days, it's nearly impossible to be a Democrat and stand up for the most vulnerable people on earth. New Democratic National Committee Chairman Tom Perez recently announced that supporting abortion is “not negotiable” to be a member of the party.

In a recent New York state senate primary, Democratic candidate and well-respected community activist S.J. Jung was vigorously opposed by members of his own party because of his pro-life views.

It now appears that West Virginia Sen. Joe Manchin, who ran as a pro-life candidate and still calls himself pro-life, is following the party line. He is voting in favor of abortion and has posed for a picture holding an “I Stand with Planned Parenthood” sign.

During a Huntington Town Hall last month, Manchin started with an apology for his views on the sanctity of innocent human life: “I have been a pro-life legislator for years … It's just the way I was raised,” he said.

However, Manchin admitted that he voted against defunding Planned Parenthood because, he claims, tax funding for the abortion giant only goes to legitimate healthcare.

“When it came down to it, I couldn't vote against it in all good conscience because it was being used for women's healthcare,” he said.

Manchin then pledged to continue Planned Parenthood tax funding, because “we've got to take care of women's healthcare.”

The “pro-life” Democrat posed for a photo with a constituent while holding a sign reading “I Stand with Planned Parenthood.” The picture was quickly posted on social media by Planned Parenthood South Atlantic West Virginia.

“Senator Joe Manchin has always claimed to be pro-life, but, since going to Congress, he has not followed through on his campaign promises,” Dr. Wanda Franz, president of West Virginians for Life, told LifeSiteNews. “He has supported government funding for Planned Parenthood at every opportunity, in spite of the documented facts that Planned Parenthood is the nation’s largest and strongest supporter and practitioner of abortion.”

Franz backed up her criticism with Manchin's documented votes.

“Joe Manchin’s voting record with the National Right to Life Committee is only 50 percent and West Virginians for Life strongly condemns this record,” she said.

“His most recent votes in the 115th Congress reveals a voting record of only 33 percent — two thirds of the time he voted against life,” Franz added.  “We have made his record clear to our 125,000 supporters.”

Furthermore, at the St. Patrick's Day Heath Care Town Hall, Manchin propagated the abortion rhetoric that the Center for Medical Progress' undercover videos were fraudulent. Without evidence, he called the videos revealing Planned Parenthood's illegal trafficking in baby parts for profit “not accurate, and there was fraud.”

“Sen. Manchin used to call himself pro-life, but this is the last straw,” Susan B. Anthony List President Marjorie Dannenfelser wrote in a press release. She pledged to “work tirelessly in the months ahead to make sure West Virginians know of this profound betrayal of the unborn and their mothers.”

Father Frank Pavone of Priests for Life said Manchin's support of Planned Parenthood is a clear change in position. He warned that West Virginia voters “will face a choice next year as to whether to re-elect Sen. Manchin” and that his organization will inform them of Manchin's support for abortion.

“Last month, he voted to force states to fund the abortion giant through Title X grants,” Dannenfelser pointed out. “That was only a day after new footage was released showing a former Planned Parenthood abortionist describe the force needed to dismember a five-month-old unborn child struggling to survive in the womb.”

Pavone speculated that Manchin was caving to Democrat coercion.

“The Democratic Party is, no doubt, putting pressure here on a senator who has in many instances been an exception to the rule and has taken pro-life positions,” he told Breitbart.com.

Perhaps in support of Pavone's theory, Manchin's re-election treasury is nearly entirely from outside his home state. The Charleston Gazette-Mail reported that Manchin has $235,000 raised for the 2018 midterm re-election campaign, with only about three percent ($7,900) coming from the people he serves in West Virginia.

“I urge him to resist (political) pressure,” Pavone advised, “to be honest with himself and his constituents … about … this criminal, child-killing enterprise, which is more a political machine than a health organization.”

Sen. Manchin's office did not return calls from LifeSiteNews for comment.