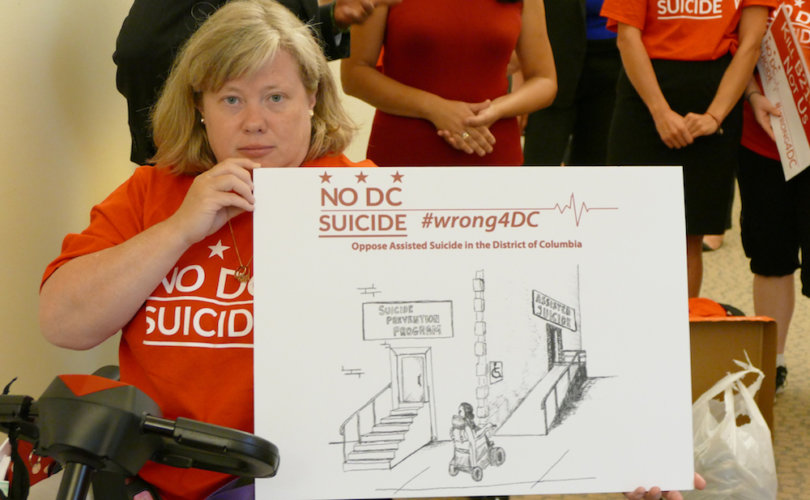 The No DC Suicide coalition hosted a press conference featuring JJ Hanson, president of Patient Rights Action Fund ; Dr. Lawrence Prograis, affiliated scholar at the Pellegrine Center for Clinical Bioethics at Georgetown University Medical Center; Anne Sommers, Not Dead Yet board chair; and Mayor Richard Thomas of Mount Vernon, New York. After the press conference, D.C. residents poured through the halls of the D.C. local government building and visited the offices of city council members to urge them to vote against Bill 21-38, the Death with Dignity Act.

Councilmember Mary Cheh introduced the bill in January 2015. The Council might vote on it this fall.

Hanson is a Marine Corps veteran who was diagnosed with one of the most aggressive forms of brain cancer, Grade IV Glioblastoma Multiforme. He received the same diagnosis as Brittany Maynard. Maynard became the face of the pro-assisted suicide movement when she campaigned for the practice across the country after her diagnosis. She committed suicide in November 2014 by swallowing a fatal dose of drugs legally prescribed to her under Oregon's assisted suicide law.

Doctors told Hanson he had roughly four months to live.

“I underwent an aggressive treatment regimen, which included surgery, radiation, chemotherapy, and a clinical trial for an experimental drug. My treatment was difficult and there were times I thought the struggle was too much of a burden to bear,” he said. “I fear to imagine what choice I might have made if lethal drugs were there at my bedside when I faced that moment of doubt and depression.”

Two years after receiving a terminal diagnosis, Hanson’s cancer is in remission and treatment options have improved.

“Every day the opportunities for survival improve yet others like me are being left without hope,” Hanson said. His experience motivated him to join the Patient Rights Action Fund as its president.

Prograis warned that legalizing physician-assisted suicide would fundamentally change the doctor-patient relationship. He said B21-38 is dangerous to the public, the poor, the practice of medicine, and D.C. citizens.

“It’s hard to explain to depressed people that some should not commit suicide while others should be supported,” he said.

“What will happen when certain patients choose assisted suicide?” Prograis asked. “Will older people and those who have physical or mental disabilities think they are in jeopardy, that their lives may be seen as less valuable to society, their care as too great a burden? This could cause a profound change to the doctor-patient relationship, a relationship based on trust that your physician will” act in your best interests.

Sommers blasted the legislation as a “deadly form of discrimination” against the elderly, ill, and disabled. Her group’s name comes from that fact that many of its supporters have been told by doctors that they had less than a year to live.

“Years, if not decades later, we’re not dead yet, just like our name,” Sommers said.

“Although people with disabilities aren’t usually terminally ill, the terminally ill are almost always disabled,” she said. “And that is why we’re interested in opposing the ‘Death with Dignity’ bill being considered by the D.C. Council, and in dispelling its myths.”

Sommers pointed to Oregon, where physician-assisted suicide was legalized in 1997, as an example of the dangers of B21-38. She said the median length of doctor-patient relationship in Oregon for a doctor who prescribes the lethal prescription is 13 weeks, with a range of one to 19 weeks. These doctors don’t really know their patients or understand their psychology, Sommers said. Furthermore, “doctor-shopping” is easy in Oregon and the state’s main pro-assisted suicide group refers people to doctors who will prescribe lethal drugs.

And in a “profit-driven healthcare system,” a $100 lethal prescription will “almost always be the cheapest ‘treatment’ option,” Sommers warned. If the Death with Dignity Act passes, “an abusive caregiver could easily steer someone towards requesting the lethal prescription, witness the request, pick up the lethal dose, and even administer the drug,” and no one would know, she said.

“No psychological evaluations are required of those requesting lethal doses, so people with a history of depression and suicide attempts can receive lethal doses with ease,” Sommers said. She pointed out that ironically, “earlier this year, this same Council passed a youth suicide prevention law, and identified youth was disabilities as a vulnerable population in that legislation.”

“What disabled people see in legalized assisted suicide is that some people get suicide prevention, while others get suicide assistance, and the presence of disability is the difference between the two,” Sommers said.

Thomas, who is the mayor of a majority-minority community, said physician-assisted suicide would let “unequal access” to healthcare become “a matter of life or death.”

‘More humane’ to take lethal prescription than shoot oneself?

Donna Smith, the Washington, D.C. legislative and field manager for pro-assisted suicide group Compassion & Choice, formerly the Hemlock Society, told LifeSiteNews that she doesn’t consider a terminally ill patient ending his or her own life with drugs prescribed by a doctor “suicide.”

“We don’t feel that this is suicide at all,” Smith told LifeSiteNews. “Suicide is someone has been diagnosed with mental issues, and they are otherwise healthy but they decide they don’t wanna live.” The proposed DC legislation requires “that the person be terminally ill and within six months of dying.”

“Now let’s be clear: there are other options,” Smith said. “You can voluntarily stop eating and drinking. But that’s painful and torturous as well. They have what you call palliative sedation, [where] they give you enough morphine to quote unquote make you comfortable. We also know that helps to make you pass faster as well. … You can come off your dialysis, you can stop all kinds of heart treatments, but this [physician-assisted suicide] provides just another option in palliative care.”

“I have volunteers who, loved ones have tried to commit suicide by shooting themselves and some of them weren’t able to do that,” she said. “And so they lived and suffered even [more]. Shooting yourself is so inhumane. No one should have to think of that as an option. We have the means to have a more humane death.”

“You know, we’re getting to the point where, with the advance of modern technology, they could probably plug you in somewhere and you could live for 100, 150 years,” Smith said. “But no one’s discussing the quality of your life. And this is not just a discussion about ending your life, it’s about the quality of the life that you would chose to have at the end of your life.”

Smith said she doesn’t support euthanasia or see equivalence between it and assisted suicide.

“It’s not the same act because it’s a different person doing it,” Smith said. With euthanasia, “there could be some miscommunication, there could be anything, and that makes the doctors even more liable.”

‘All about in how you choose to look at things’

“I am here because I know that this bill is going to hurt so many people,” Melissa Ortiz of Able Americans told LifeSiteNews. “I have seen the damage it’s done. I am a woman with a disability. I have a wonderful life because I’ve chosen to have a wonderful life. It’s all about in how you choose to look at things.”

“I know what chronic pain is about,” the disability rights advocate continued. “I live with it every day. I would still rather have to manage my pain than not be alive. I would still rather wake up every morning with a husband who adores me, a dog who makes me laugh, a career that I adore, than cut it short by my own hand.”

Ortiz said loving families don’t see their members as burdens and rejects arguments about the disabled being a “burden” to others.

“I think that this business about being a burden on the family is silly, too, because if they’re your family and they love you, they won’t see you as a burden,” Ortiz said. “If they see you as a burden, you might want to rethink your relationships with them, quite bluntly.”

A ‘cheap substitute’ for ‘real dignity’

“As a moral question,” this bill is “identifying one small group of people and saying, ‘your life is no longer worth living,’” Lucia Silecchia, a D.C. resident and law professor at The Catholic University of America, told LifeSiteNews. “And that’s bad enough as it is, then there’s no logical break to that. What’s magic about a six-month diagnosis? Why not nine months? Why not a year? Why not the person who’s facing a lifetime of a painful illness?”

Silecchia said one of the reasons she was lobbying the Council was she worries “what’s being marketed as a right to die is going to easily become a duty to die.”

“When you know that treatment will be expensive and assisted suicide will be cheap, that puts people in a very difficult, very difficult dilemma,” Silecchia said.

“Traditionally, the Jewish community’s understanding is that life is sacred,” said Rabbi Batya Steinlauf of the Jewish Community Relations Council of Greater Washington. The notion that doctors should help bring about patients’ deaths “instead of improving their lives sends a message that diminishes that message that life really is sacred” and “increases the vulnerability of our most vulnerable.”

“I worry about what it says that the very name of this bill is called ‘Death with Dignity,’” Silecchia said. “I have watched people very close to me pass away after a valiant fight, and that says to them, ‘you didn’t die with dignity.’ What does that say to a person who gets a terminal diagnosis and you’re told, this is the humane, compassionate, and dignified thing to do?”

“Death will come for all of us and I think in an ideal world, we all have this vision of what it’s going to be, but that’s not the chapter of the book we get to write,” Silecchia said. “And I think what our focus should be on is how do we care for people lovingly, carefully, and with what real dignity is and not a cheap substitute for it.”