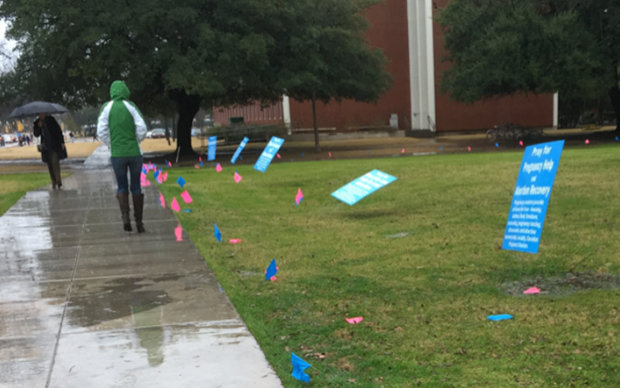 Part of the display prior to vandalismCredit: Baylor Lariat

WACO, Texas, February 9, 2015 (LifeSiteNews.com) — Baylor University is one of the nation’s largest Christian colleges, but some students appear to have missed class the day the Ten Commandments were taught.  In what has become a troubling tradition at the Texas school, a pro-life memorial display was vandalized and stolen last month during Roe v. Wade week – the third such attack on a pro-life display in the last decade.

With advance permission from the university, Baylor’s Bears for Life group set up this year’s display in order to mark the 42nd anniversary of the Supreme Court’s Roe v. Wade ruling, which made abortion legal nationwide.  The display was a “Prayer Walk” – a series of signs along a pathway on campus with messages such as “Pray for Survivors of Abortion: children who survived an abortion, mothers, fathers, grandparents, siblings, aunts, uncles, and friends” and “Pray for Adoption: 2,000,000 families in US waiting to adopt; for birth parents who choose adoption to have peace and hope; for the blessing of open adoption.”  The signs were accompanied by 200 pink and blue flags representing the more than 57 million American babies killed since abortion was legalized in 1973.

Members of Bears for Life spent several hours on the afternoon of January 21 hanging the signs and hand-placing each of the pink and blue flags.  But the next night, under cover of darkness, vandals tore down all of the signs and removed at least half of the flags, destroying the memorial and costing the pro-life group at least $500 in lost materials that were intended to be reused during future events.

It’s not the first time a pro-life display has been vandalized at the school.  In 2006, anonymous pro-abortion vandals stole similar signs, replacing them with a handwritten note that read, “Abortion saves 7,000 adult lives a day.”  In 2009, abortion supporters glued condoms to dozens of pink and blue flags and mocked Bears for Life with another note, this one promoting “Bears for Getting a Life.”

Because of the history of attacks targeting the group’s pro-life displays, faculty adviser Dr. Molly Wilmington warned campus police to keep a lookout for would-be vandals.  Club members also posted signs at each end of the Prayer Walk that read: “Please note that this space including the sidewalk has been designated and officially reserved for signs and flyers specifically created by Bears for Life.”

Unfortunately for Bears for Life, campus police failed to catch the vandals in the act.  Neither did the university’s security cameras, which were pointed in another direction at the time.

Jackson Perry, the Catholic liaison for Bears for Life, told Baylor’s school newspaper The Lariat that he was surprised by the extent of this year’s damage to their pro-life efforts.

“People protested last year and defaced property,” Perry said. “To be honest, I expected some form of vandalism— everyone was on the lookout for that—but I didn’t expect everything to be removed. It was kind of shocking. What they did was against university policy and illegal as well.”

“It just goes to show that we have a lot more work to do,” said Bears for Life president Emily Gilcrease. “I personally don’t understand the rationale behind stealing the signs. It was very unnecessary—nothing we put on them was mean or accusatory in any way.”

“It’s disappointing, but it won’t stop us from doing it again,” Gilcrease added. “It will be more closely monitored next year.”

Another faculty adviser to the group, Dr. Douglas Henry, called the vandalism cowardly and said such behavior was unbecoming of Baylor students.

“I wish I knew why they did this, but I don’t have answers,” Henry told The Lariat. “I don’t have the slightest idea of the thinking or motivation behind it. I told the students it ought not to deter them or hurt their deeply-held convictions.”

“The thieves came by night in an act of cowardice, inconsistent with the values of a university like Baylor,” Henry said. “Their efforts will be for naught.”