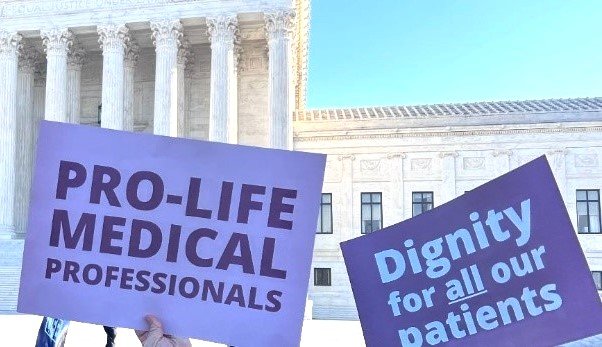 (LifeSiteNews) — Amid pressure from the Biden administration to expand access to the abortion pill, pro-life doctors are publicly denouncing the agenda and spreading the message that at-home abortion methods pose a great risk to women’s health.

The American Association of Pro-Life Obstetricians and Gynecologists (AAPLOG) recently spoke out against the push to normalize at-home chemical abortions with no prior medical consultation. In opposition to the messages being sent to women that Roe’s reversal prevents access to “safe” abortion services, the pro-life doctors are raising awareness that the dangers of self-induced chemical abortions are not reported or advertised. They are urging pregnant women to find the truth behind the abortion pill before believing that it is their only option.

“American abortion data is fundamentally flawed and is used to downplay the risk of maternal death while simultaneously touting the safety of abortion,” the AAPLOG posted Tuesday. “As physicians, we need to demand not only better reporting standards, but research into the root causes of maternal mortality.”

The Biden administration has worked to increase abortion access from the beginning of the President’s term in office, including granting permission in 2021 to send abortion medication by mail across the country. Since the overturning of the 1973 Roe decision, the administration has continued to advertise abortion as necessary “health care” for women and claiming that the abortion pill is now the “safe” option in an unwanted pregnancy.

“In the wake of the historic Supreme Court Dobbs ruling which overturned Roe v. Wade, disinformation and alarmist claims are increasingly being spread for political purposes,” a statement on the AAPLOG website reads. “As the world’s leading association of pro-life medical professionals, we refuse to allow fear-mongering, partisanship, and untrue messages to impact our patients’ care.”

Last month, the pro-life organization conducted a nationwide survey that asked both men and women various questions regarding abortion. The feedback included participants’ views on abortion provider accountability, whether abortions should be permitted and denied, and chemical abortion.

According to the results, 30% of participants support “unsupervised, at-home use of chemical abortion pills” and 54% do not. Seventy-three percent agreed that “common-sense provisions are needed, such as ensuring in-person consultations and parental consent for minors, to ensure the safety of patients seeking abortion.”

On June 28, Secretary Xavier Becerra spoke at a press conference regarding Biden’s pro-abortion actions in the aftermath of the Supreme Court’s ruling of the Dobbs case.

“Medication abortion has been approved by the FDA for years and is safe for patients,” he said in his remarks. “It is the gold standard for care when someone who’s pregnant experiences a miscarriage.”

However, “states are not required to track or report abortion statistics to the Centers for Disease Control and Prevention, which releases a annual report on abortion data.” according to the Washington Times. Without the accountability to report negative impacts or dangerous complications of chemically induced abortions, the public is left to hear the urgent message from the pro-choice movement to utilize the abortion pill.

The drug Mifepristone was originally approved in 2000 as a means of early stage abortion, which included certain safety measures such as being distributed only by a qualified healthcare professional. According to a document released by the AAPLOG, the protocols which were intended to “minimize the significant risk of hemorrhage, tissue not removed, and infection” were lessened in 2016. That same year, the FDA discontinued its collection of data on non-fatal negative results, focusing only on maternal deaths, which are connected to the use of Mifepristone.

In December 2021, the Food and Drug Administration (FDA) made a permanent change to protocols surrounding the use of Mifepristone, allowing the drug to be mailed to patients who request it without the requirement of an in-person consultation or prescription.

“They have chosen to completely ignore the thousands of women who are showing up in their local emergency rooms due to heavy bleeding, retained tissue, infection, or other complications as result of medication abortions,” AAPLOG stated.

Following the recent bans on abortion in many states and the intense pressure from the Biden administration to access and utilize the abortion pill, this group of pro-life doctors continues its efforts to teach the truth about chemical abortions and enable their patients to make fully-informed decisions during pregnancy.

A recent initiative is a podcast titled The Post-Roe Review, which discusses the importance of Roe’s reversal to medical professionals.