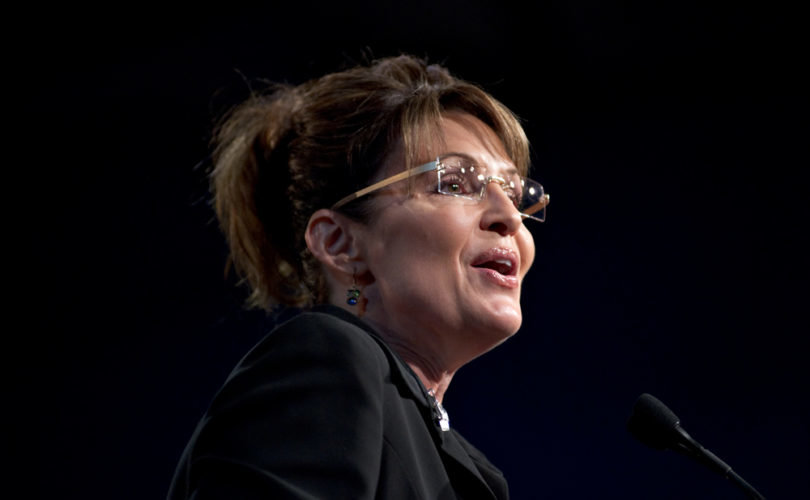 AMES, Iowa, January 20, 2016 (LifeSiteNews) – Donald Trump will unite Republicans with a pro-life message and get more results than the Beltway GOP, Sarah Palin told a boisterous crowd in Ames, Iowa, on Tuesday.

Trump, Palin promised, will “unify [the GOP] around the right issues – the issues important to me, or I wouldn’t be endorsing him: pro-life, pro-Second Amendment, strict constitutionality.”

She said the Republican Establishment had no right to dismiss Trump and his diverse band of supporters, many of whom are Reagan Democrats and minorities, as insufficiently conservative.

“What the heck would the Establishment know about conservatism?” she asked. “Tell me, is this conservative – GOP majorities handing over a blank check to fund ObamaCare and Planned Parenthood?” she asked. “And illegal immigration that competes for your jobs, and turning safety nets into hammocks?”

How could they tell Phyllis Schlafly, a “conservative movement icon and hero and a Trump supporter,” that “she's not conservative?”

Palin's endorsement may help settle fears that Trump is not pro-life enough on abortion, although he has promised to sign the Pain Capable Unborn Child Protection Act and said he would not fund Planned Parenthood as long as it performs abortions.

The Trump campaign, which hinted at a “major endorsement” prior to Palin's speech, highlighted her own bona fides on the issue in a press release. “A trusted conservative, Palin has a proven record of being fiscally modest, staunchly pro-life, and believes in small government that allows business to grow and freedom to prosper,” it said.

“If there's anybody that does not represent 'New York values' in the Republican Party, it's certainly Sarah Palin,” she told CNN. “She is all about Alaska, outdoors, pro-life, pro-guns.”

Selecting Trump was also a big blow to Trump's closest challenger, Ted Cruz, whom Palin endorsed when he ran for Senate in 2012. She made a glancing reference to him Tuesday, saying that reclaiming America will “take a whole team…so our friends who are fighters in the House and the Senate today, they need to stay there and help out. They can help our new leader in the positions that they are in.”

Cruz handled being passed up with warmth, tweeting:

I love @SarahPalinUSA Without her support, I wouldn't be in the Senate. Regardless of what she does in 2016, I will always be a big fan.

She also had kind words to say about primary challenger Rand Paul, calling his vision of a less interventionist foreign policy “healthy,” especially in the Middle East. “Let them duke it out and let Allah sort it out,” she said. “We’ll fight for American interests.”

“We haven’t prioritized our own domestic budgets well enough to be able to afford what we’re doing overseas,” she said. “Things are gonna change under President Trump.”

The media's adverse treatment of Trump and his followers – whom one writer in Politico has implied are authoritarians – influenced Palin's view of Trump. Media figures have harassed Palin and her family “every day since that night in ‘08, when I was on stage, nominated for VP,” Palin told the Ames crowd.

Going “through the ringer as Mr. Trump has, makes me respect you even more,” she said.

She later poked fun at Trump's use of the word “huge,” saying “he's not an elitist.”

“Only one candidate’s record of success proves he is the master of the art of the deal,” she said. “He is beholden to no one but we the people, how refreshing. He is perfectly positioned to let you make America great again.”