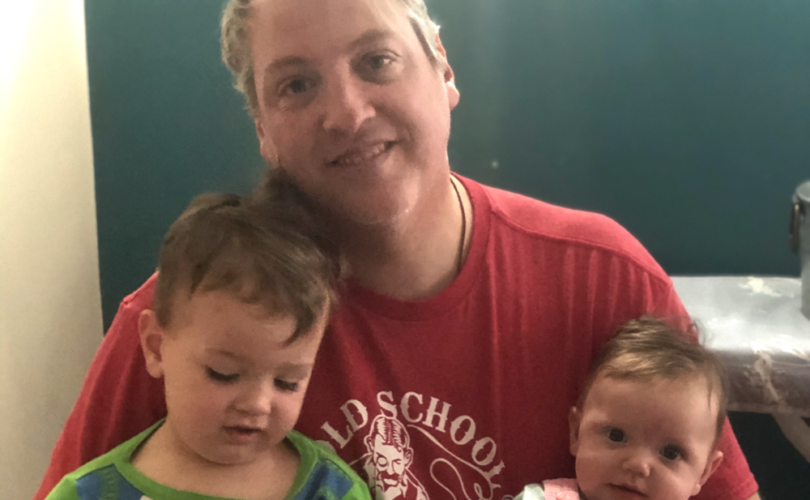 PHILADELPHIA, Pennsylvania (LifeSiteNews) — The federal trial of a pro-life dad of seven who was arrested by the Federal Bureau of Investigation (FBI) during an early morning raid will begin on January 24.

The Thomas More Society, a pro-life legal nonprofit, is representing Houck. He has pled not guilty to both charges.

President Joe Biden’s Department of Justice (DOJ), currently facing congressional scrutiny for how it has become weaponized against conservatives under Attorney General Merrick Garland, filed charges in September 2022 against Mark Houck for an incident that happened in 2021.

For “weeks and weeks,” a “pro-abortion protester” would speak to Houck’s 12-year-old son saying “crude … inappropriate and disgusting things,” such as “you’re dad’s a fag,” and other statements too vulgar for her to convey, Ryan-Marie Houck, Mark’s wife, previously told LifeSiteNews.

Her husband would tell the pro-abortion activist to stop talking to his son. And “he kept doing it and kind of came into [the son’s] personal space” obscenely ridiculing his father. At this point, “Mark shoved him away from his child, and the guy fell back,” Ryan-Marie Houck told LifeSiteNews.

Houck’s case has drawn support from across the country and from Catholic leaders.

Cardinal Gerhard Müller, the former head of the Congregation for the Doctrine of the Faith (CDF), visited the Houck family in October 2022 to share his support. “The administration and government of democratic states have to serve the people and not the other way around,” Cdl. Müller said. “Therefore, I cannot accept the griefs of a peaceful father defending his son, defending the right of life of the babies, [who] is so mistreated.”

“This is not acceptable, and this is a scandal,” Cdl. Müller added. “They are making America ridiculous in the eyes of society.”

Senator Josh Hawley, a Missouri Republican, has demanded answers from AG Garland and the DOJ on the raid on Houck.

“I want to know from Merrick Garland directly why Biden’s DOJ is arresting Catholic protestors like terrorists – complete with SWAT-style tactics – while letting actual terrorist acts like firebombings go unpunished,” he tweeted in September 2022, soon after the raid. Sen. Hawley also sent a letter that detailed his questions.

“[Y]our office has so far turned a blind eye to the epidemic of violence across the country by pro-abortion extremists against pregnancy resource centers, houses of worship, and pro-life Americans,” Sen. Hawly wrote. The FACE Act, Hawley pointed out, also prohibits these “violent acts.”

The raid on Houck and a similar subsequent raid on Catholic father of 11 Paul Vaughn are just the latest in a series of actions, or inactions, taken by the DOJ under Garland which have raised concerns among conservatives and pro-lifers about the equal application of the law.

For example, Garland directed federal law enforcement to monitor parents and other activists who spoke out at school board meetings against COVID policies, critical race theory, and pornographic LGBT content.

However, the DOJ has not been as quick to prosecute pro-abortion activists who have protested, likely in violation of federal law, outside of the homes of Supreme Court justices since May when the Dobbs v. Jackson decision leaked.

In October, soon after the Houck raid, Biden’s DOJ also filed charges against eleven pro-life activists, including 87-year-old concentration camp survivor Eva Edl. The pro-lifers were hit with federal charges for their involvement in a peaceful 2021 pro-life rescue at a Nashville, Tennessee abortion facility, which has since been found to stop committing abortions to comply with current state law.