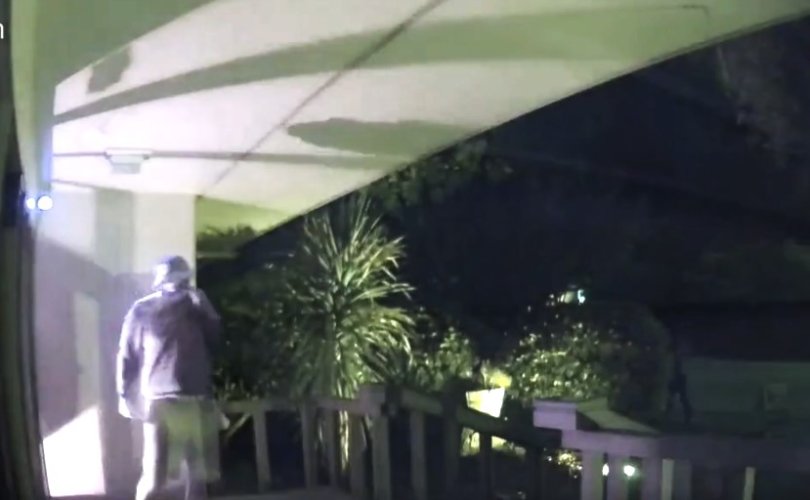 An unidentified man throws a firebomb into a Republican campaign office in Washington state.Twitter

A video posted to Washington state House Republican minority leader J.T. Wilcox’s Twitter feed on Monday evening shows what appears to be two men approaching, in quick succession, a building that includes the offices of state Representative Andrew Barkis as well as of the House Republican Organizational Committee.

The first man, wearing a coat raised to cover the bottom of his face, smashed a window to the building with three blows, and then quickly left as another man with a bucket hat dropped a lit flare into the building, covering the bottom half of his face with his jacket as he left.

Wilcox shared, “Fortunately, the flare landed on a masonry floor and the building survived.”

According to the Daily Mail, the attack is the 17th so far on a pro-life figure’s office or on a crisis pregnancy center after the leak of the Supreme Court draft opinion that would overturn Roe v. Wade if upheld. LifeNews also reported that the attack was the fifth arson attempt against pro-lifers since the leak.

Local police say the same suspects later burglarized an antique shop about a mile away, and video images were taken of the burglary as well, according to the Associated Press. A police report shows that DNA samples have been recovered because one of the suspects cut himself while breaking into a jewelry case in the antique store.

Regarding the attempted arson, Wilcox tweeted Tuesday, “An attack like this changes you forever.  It happened on Andrew’s birthday. On the same day unhinged partisans publish a list including Andrew as an extremist, something we all know is BS. The graphic included a lit fuse. Sick.”

Washington Democrat Gov. Jay Inslee condemned the attack Monday evening on Twitter. “Such attempts at violence are abhorrent. We’re thankful no one was hurt. Hopefully law enforcement is able to identify these individuals before they inflict any more harm,” Inslee wrote.

Only hours before, Washington state GOP chairman Caleb Heimlich had called on Inslee and other Democrats to denounce the attack, tweeting, “I have consistently condemned political violence. Now I am waiting to see if @GovInslee @Tinapo@DrKimSchrier @PattyMurray and other Washington Democrats will condemn this heinous act of political terrorism committed this morning.”