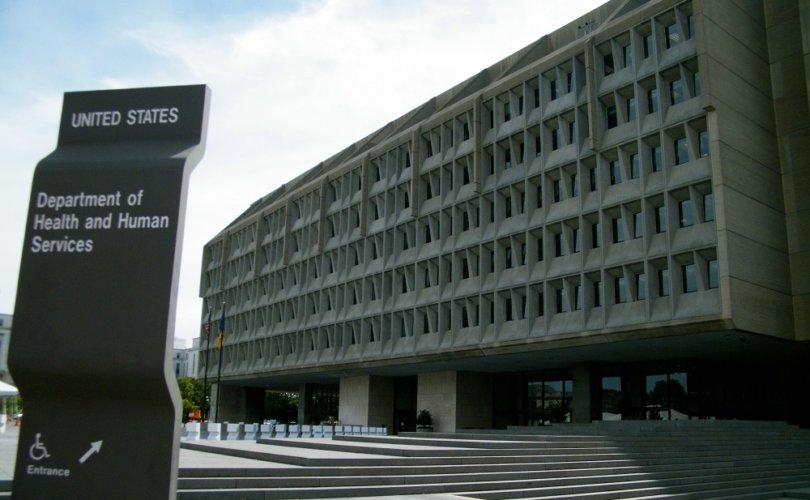 The Department of Health and Human Services building in Washington, D.C.Sarah Stierch (CC BY 4.0)

PORTLAND, Oregon, January 20, 2019 (LifeSiteNews) — Oregon Right to Life (ORTL) has filed a complaint against the state of Oregon with the U.S. Department of Health and Human Services, arguing that the abortion requirements for health insurance under the state’s Reproductive Health Equity Act would force the pro-life group to violate its mission.

According to a statement, ORTL executive director Lois Anderson said the group “exists to advocate for vulnerable human beings who are not protected under law.”

“Under this mandate, we are literally being forced to violate our mission and very reason for existing,” she added. ORTL objects to the state’s requirement that health benefit plans provided by employers include coverage for abortions and contraceptives that can act as abortifacients, as well as related services.

In an email to LifeSiteNews, ORTL spokesperson Liberty Pike said the Office of Civil Rights at HHS has confirmed receipt of the complaint.

According to the group’s statement, ORTL attorney James Bopp, Jr. said, “Oregon’s mandate that pro-life groups cover abortion on demand in its employee health plans violates their conscience rights under the Weldon Amendment. Weldon requires states to protect such conscience rights or lose federal funds. Oregon receives lots of federal funding that it is putting at risk.”

The Weldon Amendment is a federal law that prohibits state government agencies from using federal funds to discriminate against health care entities that do not provide, pay for, provide coverage of, or refer for abortions. According to an ORTL statement, “Oregon’s abortion coverage mandate, compelling ORTL to include coverage of abortion and abortifacients in its insurance plan, unconstitutionally burdens ORTL and violates the Weldon Amendment.”

According to the release, ORTL qualifies as a “health care entity,” as defined by the amendment, and objects to providing coverage for abortion and abortifacients. The pro-life group asserted that the state is engaging in prohibited discrimination because it seeks to compel pro-life health care entities, including ORTL, to include abortion coverage in health insurance that ORTL offers to its employees. Therefore, Oregon’s mandate violates the Weldon Amendment, the group’s statement said.

According to the release, ORTL wants all of its statements and operations to “be consistent with its beliefs and a compatible part of its pro-life message.” These goals apply to the health insurance coverage it offers to its employees, the group said.

ORTL is seeking to have itself and similar entities exempted from Oregon’s mandate for heatlh care coverage as applied to coverage for abortion, abortifacients, and related services, except where the life of the mother is in imminent danger, said the group’s statement. The group wants authorization for insurers to offer and employers to obtain health care plans that exclude the abortion and contraceptive coverage to which the group objects.

After President Trump took office, his administration moved to strengthen guarantees for conscience with regard to contraception and abortion. According to a January 2019 statement by HHS, the administration moved to enforce the Weldon Amendment and the related Coats-Snowe Amendments. In addition, it launched a new Conscience and Religious Freedom Division, which is the first time a federal office for civil rights has established a separate division dedicated to ensuring compliance with conscience guarantees and free exercise of religion in health care and human services.