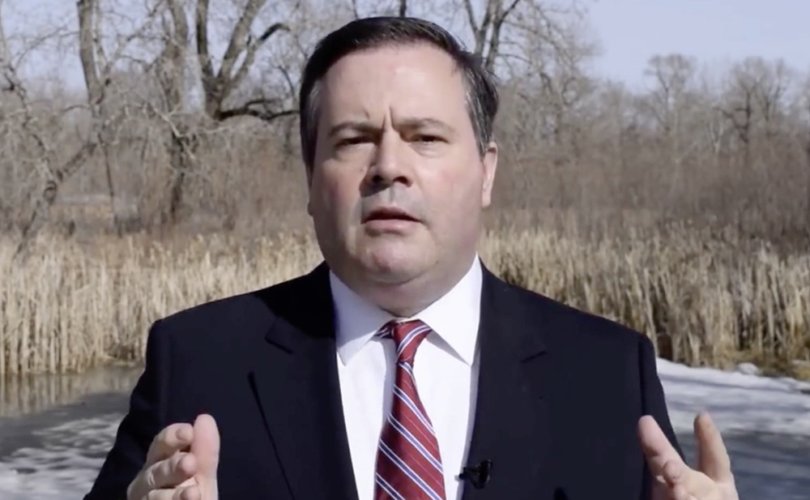 Kenney is one of three men vying for leadership of the UCP, a new center-right party born in July when the Progressive Conservative and Wildrose parties merged.

He and former Wildrose leader Brian Jean are acknowledged frontrunners in the race, which includes Calgary lawyer and longtime Conservative organizer Doug Schweitzer.

UCP members will vote by preferential, non-weighted ballot between October 26 and 28, and the result announced at the party’s Calgary convention on October 28.

An Angus Reid Institute October 11 poll found 70 percent of Albertans see Premier Rachel Notley’s NDP government as “out of touch with what Albertans really want,” according to Global News.

Angus Reid predicted the victor in the UCP leadership election “will find himself on a relatively promising path to the premier’s office.”

Campaign Life echoes this in its voters’ guide on the contest.

“This is a rare opportunity to elect a pro-lifer to a position where they will almost certainly become Premier of Alberta, in the future,” it states.

Campaign Life gives Kenney, 49, a green light for his impeccable pro-life and pro-family voting record during his 19 years as a Calgary MP.

Well-known for his social conservative views, Kenney held a number of high level portfolios in Stephen Harper’s Conservative government, such as immigration, multiculturalism, employment, and defence.

He kept his seat in the Liberal sweep of October 2015 but resigned last September to run as leader of the PC Party on the ticket of creating a united party with Jean’s Wildrose.

Now MLA for Fort McMurray-Conklin, Jean had a perfect pro-life, pro-family voting record as a Tory MP under Harper, but has since publicly disavowed such convictions, according to CLC.

Jean told Calgary Sun columnist Rick Bell in 2015 that he was not a social conservative.

Jean earlier told reporters: “Abortion … is a boat that has already sailed … I am not interested in pursuing these issues.”

Jean initially supported Alberta schools not telling parents when their child joined a gay/straight alliance, a policy the NDP government intends to enshrine in law, according to the CLC voter guide.

But after observing Kenney’s support in speaking out for parental rights, Jean began criticizing some curriculum changes as “ideological,” contended Campaign Life.

“Voters ought to be wary of such a convenient, last-minute conversion, seemingly brought on only after witnessing Kenney’s support grow due to his pro-parental rights stance,” it stated.

Schweitzer gets a red-light rating from CLC for endorsing abortion and LGBTQ rights. He has also signaled support of the NDP stance against parental rights when it comes to GSAs.

Kenney has seven endorsements within the 27-member UCP caucus, and at last report Jean had 11.