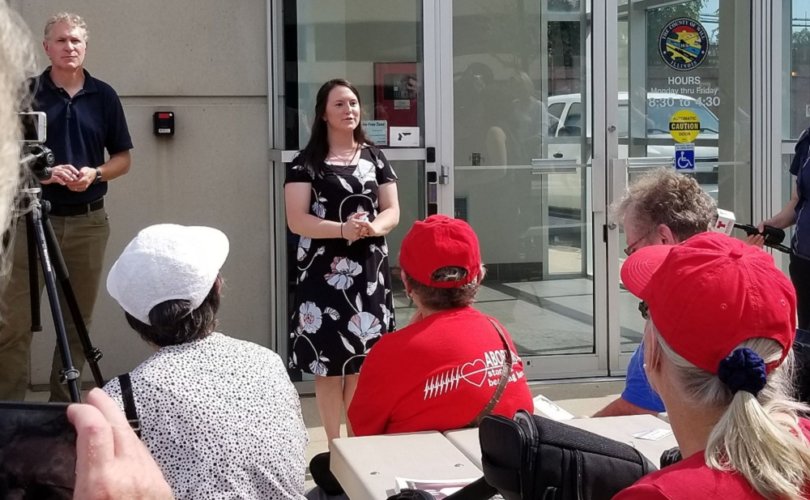 September 26, 2019 (Students for Life) — On Thursday, September 19th, about 75 pro-lifers gathered outside the Will County, IL coroner's office to pray for and mourn the loss and violation of human dignity of the 2,200+ aborted baby remains found at disgraced abortionist Ulrich Klopfer's home in Crete, Illinois, near the Indiana border. Klopfer was an abortionist in Indiana for decades before losing his license and his facility.

Speakers included Eric and Joe Scheidler of Pro-Life Action League; a representative from the Archdiocese of Joliet; and Sarah Minnich, the Students for Life Regional Coordinator for Illinois and an Illinois resident herself.

They prayed not only for the aborted babies but for all the women that Klopfer took advantage of, as well as for Klopfer himself. Eric Scheidler noted that in his last days, Klopfer was basically alone; the only people who regularly talked to him were his wife and pro-life activists who had gotten to know him through their efforts to close abortion facilities and save preborn lives.

Will County announced later that day that they were handing over the investigation to the state of Indiana and had no plans to investigate wrongdoing, such as the knowledge of his employees who may have helped transport the remains across state lines.

A former colleague of Klopfer recently told CBS-2 in Chicago that Klopfer had many problems. “'I think there's an element of trophies, especially with the documentation and the putting them in formaldehyde, and putting them in a box, absolutely,' Cly said. 'He left them in his garage, not in an unmarked storage shed that he could've paid cash for under a different name. I think there's a sign that he wants more to be discovered.' Cly suspects there could be more remains to be found. 'That type of person thinking in that deranged way, it's probably just a tipoff,' Cly said.”

In response to the news of the remains being found, Students for Life of America has filed a public records request with the South Bend Mayor's office, where Klopfer used to operate a facility.

We have questions about Pete Buttigieg's shady dealings with an abortionist who stored thousands of aborted babies on his own properties!
https://t.co/ZbQHn97lIJ

Every single candidate for President should be asked:

Do you believe there should be regulations to stop abortionists from keeping aborted babies as trophies?

Published with permission from Students for Life.